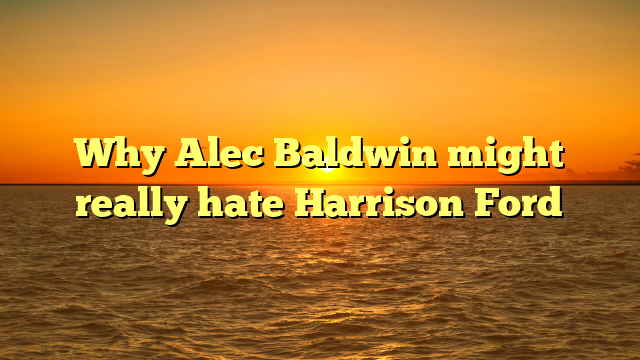 One of the things that Alec Baldwin & Harrison Ford share, is that they’re both working actors who despite getting older still get the occasional moment in the spotlights. For Ford it’s been by returning to classic roles in Star Wars: The Force Awakens and Blade Runner 2049, for Baldwin it’s been through the comedy of 30 Rock and his impersonation of Donald Trump in Saturday Night Live. You might think that would result in two happy actors, but it appears Alec Baldwin still holds some resentment towards Ford.

This is how Baldwin describes Ford in his memoir Nevertheless:

Ford, in person, is a little man, short, scrawny, and wiry, whose soft voice sounds as if it’s coming from behind a door.

If that sounds unnecessarily mean, keep in mind Baldwin might have a good reason to resent Ford. Those who have seen The Hunt for Red October from 1990 might remember that Baldwin portrayed Tom Clancy’s classic hero Jack Ryan in it. 2 years later Jack Ryan returned in Patriot Games, where he was not portrayed by Baldwin, but by Harrison Ford.

The way the story goes is that Paramount pushed Ford forward, since they owed him money already for a movie that had fallen apart. Here’s Baldwin recounting this in an article he wrote for the Huffington Post:

On the phone, John told me that during the period of the previous few months, he had been negotiating to do a film with a very famous movie star who had dropped out of his film days before so that he could go star in the sequels to The Hunt For Red October. John further told me that Paramount owed the actor a large sum of money for a greenlit film that fell apart prior to this, and pushing me aside would help to alleviate that debt and put someone with much greater strength at the box office than mine in the role. I sat there mildly stunned because not only was I in an active negotiation with Paramount, but for them to negotiate simultaneously with another actor was against the law.

The rest is movie history: Ford would play Ryan not only in Patriot Games but also in Clear and Present Danger from 1994. According to Baldwin, director John McTiernan (find out what happened to John McTiernan here) had asked Ford if he was aware the studio was still negotiating with Baldwin. “Ford’s reply, according to John, was ‘F–k him,’” Baldwin wrote.

If that’s true, that would qualify to us as a valid reason to dislike Ford. On top of this, Baldwin had lost a part to Ford before in the past. The movie in question is 1988’s Working Girl, in which Melanie Griffith plays a secretary who advances in her career and strikes up a relationship with Harrison Ford. That role however, was originally meant to be played by Alec Baldwin. More information on this can be found in this article on the oral history behind Working Girl. Here’s how casting director Juliet Taylor describes the casting process, after they had settled on unknown (at the time) Melanie Griffith for the lead role:

[Director] Mike Nichols and I had already kind of fallen for Alec Baldwin and wanted him to play [Jack Trainer], but the studio was catatonic about that. They did not want two unknowns in the leads.

Baldwin as a result settled for the smaller role of Griffith’s ex-boyfriend.

Of course it’s not unusual to lose roles to a fellow actor in Hollywood. However, we can imagine it must have been quite painful for Baldwin who not only lost a leading role to Ford with Working Girl, but also a role he had already portrayed with Patriot Games.

Although Baldwin appears to be doing fine still, he has never reached the heights of Ford in his career. The character of Jack Ryan was portrayed by different actors after Ford, such as Ben Affleck and Chris Pine. He is currently seen on TV, where he is portrayed by A Quiet Place’s John Krasinski.