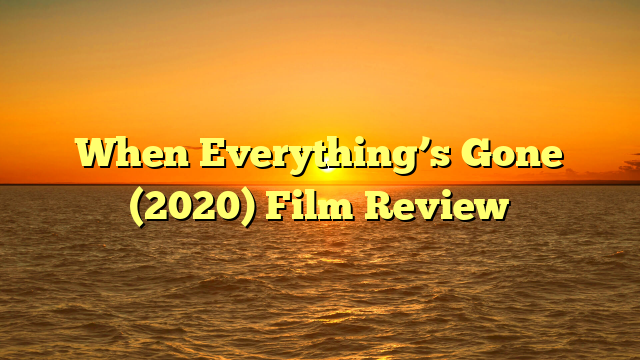 Set in the aftermath of a devastating air born plague which had killed the majority of the world’s population, a man haunted by his past searches for answers and other survivors, hoping for an brighter future.

In this post-apocalyptic drama, Rory (Alessi) has hidden out in the barren wilderness for over a year, troubled by memories of his younger brother, Chris (Gabriel), whose tragic fate is left unspoken until the film’s final scenes. Rory eventually stumbles across a small family, befriending a man named Casper (Emanuel) and his twenty two year old daughter, Rosie (Blades). Together, they embark on a life changing journey to find more survivors, confront their own personal demons and rediscover the hope they all desperately need to continue on.

The movie is classified as a thriller, however there are only a few action sequences which do not make an appearance until the first hour has crept up at a plodding pace. Unlike other films in the genre, the thrills are few and far between, with directors Alessi and Jeff Stewart focusing on a more introspective, meditative exploration of its characters. The original first draft of the script was written back in 2014 and the appearance of a real life global pandemic with the emergence of COVID-19 became a bizarre coincidence for the production team.

The majority of the screenplay is taken up by flashbacks to Rory and his brother from their childhood adventures to their attempts to escape the plague, and Rory’s time he spends with the family who have taken him in. A poignant, reflective tone is established by a more sombre take on life after an epidemic, which does offer a thought provoking take on the genre, but also presents its main downfall in the lacking a big entertainment factor. The narrative addresses significant themes of loss and how we cope with this, ultimately expressing optimism in the face of death and the connections we make with one another, yet its sluggish pacing leaves a lot to be desired.

Although the film struggles to maintain a decent momentum, William Kaufman’s cinematography is stunning, with some exceptional drone and bird’s eye shots of lush woodlands of greens, reds and browns, complimenting the story beautifully. The production team certainly capture a realistic apocalypse tone with the barren land and woods. Performances from the leads are all reliably strong as well, with Catherine Blades making the best impression as the hopeful, youthful Rosie.

When Everything’s Gone offers a thoughtful take on the post apocalypse genre by examining its characters and the relationships between them, brought to life by impressive visuals and good performances, but is let down by a lack of entertainment value.