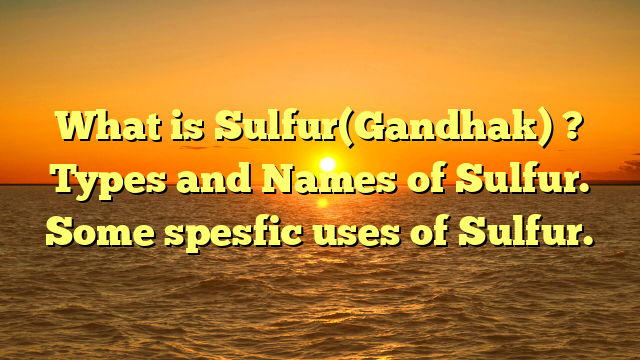 In Ayurvedic chemistry, the number of sulfur comes after Parad (Mercury). Actually, Combination of these two (Sulfur , Mercury) is essential for the chemical medicine creation. Ayurvedic chemical therapy cannot be conducted without their combination. These two cannot do as much work while they are alive, as they doing amazing work together. With this, the name Parvati Raj of Shiva, semen and sulfur of Mercury proves meaningful. Therefore, the description of the sulfur is as written after Mercury.

Types of Sulfur and Name:-

There are three types of Sulfur. The first of these is red like a beak of a parrot. The second one is yellow, it is medium. The third one is white, it is medium. Some people believe that Sulfur is of four types (white, blood, yellow and Krishna varna). This white Sulfur is called Khatik because it is like a Chalk and it is used for coating. And the Sulfur which is yellow in color is called olfactory sulfur. Another distinction of this is “Dried”. It is best for chemical work. The Sulfur that resembles a beak of a parrot is used to make gold and silver metal. And the black color Sulfur is destroyed of slightest death. In the present time, it has become extremely rare to find red and black Sulfur.

Heat, Leprosy, confusion and biliary diseases are caused by the consumption of Sulfur. And the form, force, semen and health is destroyed. Therefore, it should be used only after purifying.

Put the melted butter in an iron vessel and set it on fire. When melted, put the coarse powder of the melted powder in the melted butter. Add the milk to the Sulfur as it melts. Later, remove it and wash it with warm water and dry it. use it in all diseases.
Note – It is often seen that small rocks and sand particles are also found in the Sulfur. So when the sulfur melts in the pan, tie a clean cloth over the milk. Put the sulfur on the cloth, so that only the sulfur should be put in milk and the pebbles and stones should remain in the cloth above all. In the same way, brinders are also better treated with Bhringrajasava or Triphala decoction. According to the opinion of some Acharyas, by doing this refinement 3 to 7 times, there is special purification.

Pure Sulfur is good in chemicals and sweet in juice and bitter in baking. It cures scabies and Leprosy. By nature it is warm and fire-lamp and digestive. Removes the intestine and is its absorbent and it is the evil of destroying and purifying the bad stool. This is semen for Mercury, that is, it increases its curative power. Worm and spleen are perishable. Sattwarpa – (Just as sattva is extracted from other metals, it does not, however, it itself is subjective) and is ejaculatory.

Cook the Sulfur powder in 8 times the milk so that it becomes thick. Then adding hulhul juice to it, after cooking it slowly, put it in a decoction of Triphala and wash it with warm water.

Some specific uses of Sulfur:-

Mix sixteenth part trikatu (dry ginger, peppers, chilli) powder in pure sulfur powder and then fold it finely in oil and spread a clean, clean cloth, spread the ball on it and fold it carefully to make a bundle type. Wrap that style with thread. Now hold this bundle with a extractor or tweezers and place it in a glass vessel at the bottom and flame in the fire. In which the bottom of the brimstone is dripping, after the cloth bundle burn, filter out the oil that is in the vessel and keep it in a good bottle. “It is also called Gandhakdhruti”.

If you take 3 drops of this oil and juice and vermillion with 3 rattis and mix it in the betel leaf with your finger, its helps intestinal fire. Acute caries, pandas, rashes and respiratory diseases are destroyed. Colic, painful duodenum and amazirn are also destroyed.

Take equal quantity of pure Sulfur and black pepper powder and take the saggun triphala with Sulfur and mix it together. Leprosy is destroyed by consuming this powder with the boiling of the root of pudding root or self.

Sidham(Sehuan) is destroyed by mixing Sulfur and Yakshawar in mustard oil.

Grind Mercury, brindle, madar milk, rock salt and turmeric and apply the paste to the goiter’s knot. This process relief the goiter knot.
or
Mix pure Gandhak 4 ratti in 3 masha Tirphala powder and take it with cold water in the morning or evening and take 21 or 41 days

Taking pure Mercury and Sulfur in equal portions and dissolving it in a copper vessel, consuming kajjali made with betel juice and honey, destroys all kinds of Hikka.

In pure Sulfur is mixed with 1 ratti, 4 rattis jaggery and jaynti juice then the disease is destroyed.

3 Masha mix pure Sulfur powder in 20 gm mustard oil and keep it in the sunlight. Allow one day of sunlight. Massage with this oil on the second day after sitting in sunlight. Similarly, old pimples, blood disorder etc. will be destroyed by doing it for one week and the body will become beautiful.

Taking 1, 2, 3 rattis seeds of pure Sulfur, cumin and big kateli respectively, after taking fine powder and drinking it with horseradish, the Strangury is destroyed.