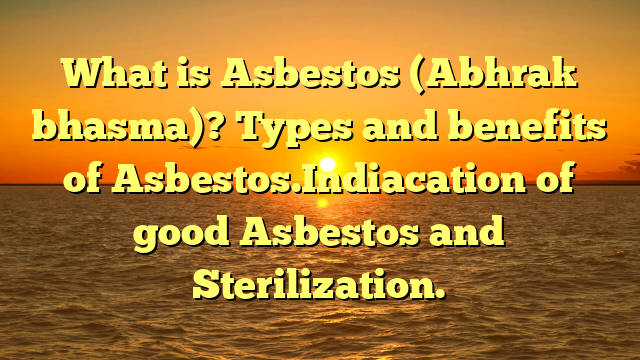 It is often found on mountains. Asbestos of white, brown and black is found in India, in the coal mines around Hazaribagh and Giridhar in Bihar province and Raniganj in Bangal. It has mines in Chirtor, Bhilwara in Rajasthan. It is found in mountains in large dhokas(Places) frozen at the bottom. When cleaned, it folds out like glass. Its leaves can be separable from transparent, soft and easy. In Ayurveda it is calculated in maharas. Vajrabhak (black mica is used to make Bhasma. It is very useful because of its special content of iron in Euphoria.

Asbestos which is of the best black color, smooth to touch and shiny in appearance, and whose leaves are thick and open easily and which is heavier than 10 gm, is the best Asbestos.

Bring small pieces of black stone-free and weighty Asbestos and make small pieces and then heat it in the fire, and it it is red enough then weave seven times in cow-urine, triphala decoction and cow’s milk. Wash, dry and crush in imamdaste in the back water and make a fine powder.

It is especially good to wash the purplated Asbestos after putting it in water for two-three days.

Stir Asbestos and extinguish it seven times in the juice of Sambhalu (Nirgundi), Asbestos is purified.

Quench the Asbestos and extinguish it seven times in a decoction of plum, then dry it and keep it in the hands and then it is purified.

Asbestos ash is the same good and special quality, which does not shine. To remove this radiance, Vaidyas give many cuts to many processes, but the glow does not go away. Due to the glow of ash, the patient’s intestine are cut, the blood starts coming in, the heal increases immensely and other disturbances start happening. So patients and physicians get upset about this glow. To remove this glow, a simple device is suggested, which will make Asbestos free in one to two puts.

Old jaggary 51, sora kalmi 52, mix both of them with some water and mix them together then mix 52 sher pure Asbestos in it and fill it in the pan. Cover the mouth of the hand from the top with a lid and place about 10 seers of charcoal on the iron mesh of the omnipotent furnace or on the iron mesh of the brewery. Put charcoal on the bottom and place asafetida on the same coal (Keep one horse at a time). Putting on the heat, because of the fastness of the heat, sora will come out of the hand with a sound, there is nothing to fear and sometimes Sora doesn’t even fly.

Dissolve the Asbestos extracted from the above method with juice of mudar(Madar) leaves and make tablets. When the tablet become very dry then put the samput in Gajput and blow it, giving three such puts will consume red color. Use it in all diseases.

Grate the cereal in 24 hours worth of Aak milk and make small round balls, wrap it in leaves of Aak and close it in the sand, and burn it in the Gazput. After being material is cold, remove and then put it in the milk of Aak in the same way. Giving 7 such pots with milk of Aak and three pots with the decoction of bud hair makes the best ash of Asbestos in 10 puts.

Dry the powder of Asbestos in onion juice and grind it, then close it in the syrup and blow it into the Gazput. In this way, 21 put in onion juice, 7 put in Giloy juice and 7 put in milk of Aak and 7 times after putting it in the molasses syrup, it is best to consume Asbestos.

NOTE:- Asbestos Bhasma is made from 400 to 600 gm together and it is very good to be consumed.

Asbestos consumed according to disease:-