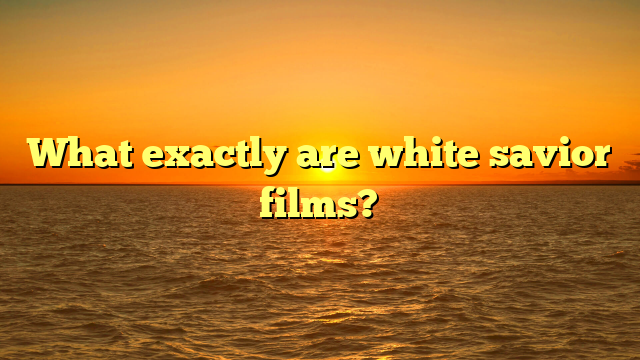 When Green Book won the Academy Award for best picture at the 2019 Oscars, you might’ve heard the term “white savior film” being thrown around. The actual explanation of what these films are, is quite simple. To explain why they can be both critically lauded and controversial at the same time is a more complicated matter.

Let’s start with the easy part first: the definition. White savior films tell stories about marginalized/non-white people or communities who have to deal with hardship. The problematic part of these stories is the character at the center: a white protagonist. This protagonist ends up being the one to turn things around for the marginalized character(s) and has a proper character arc as he/she learns something about themselves in the process. Some notorious examples in this genre are Dances With Wolves (in which Kevin Costner plays a US lieutenant who stands up for a Sioux community), Glory (in which Matthew Broderick heads up a regiment of African-American soldiers) and Dangerous Minds (where Michelle Pfeiffer’s teacher changes the life of her African and Hispanic American students). You could almost say Hollywood is telling the right stories, but from the wrong perspective.

The reason for this is quite simple: Hollywood has been a very white institution. You might recall how in 2015 this resulted in the creation and trending of hashtag #oscarssowhite. 2015 was the second year in a row where all acting nominees (both male and female) had been white performers. It’s no surprise that the Academy membership who had chosen these nominees was 92% white (and 75% male) then.

#oscarssowhite has not been the only outcry in society for better representation. The #metoo movement created a platform for (predominantly) women who have suffered sexual abuse by men, and the #blacklivesmatter movement started as an outcry against police brutality towards African-American people. Both of these movements serve as a reminder of how a lot of these stories tend to be buried,  underreported on or misrepresented. It’s especially the latter that Hollywood is guilty of.

In recent years Hollywood has gotten better at this, with movies such as Moonlight, and 12 Years a Slave. After the #oscarssowhite controversy, the Academy looked to allow more diversity amongst its members. However, in 2020 that still means 84% of the members are white and 68% male.

When Green Book (which one can argue tells the story of a white man protecting a black man) won best picture in 2019, it was further confirmation to a lot of people that the Academy was struggling to change.

Then again, Parasite won the award in 2020. So let’s hope that’s the start of a fresh new direction.

If you want to hear more of our wisdom, read up here on what is an anthology series.

The post What exactly are white savior films? appeared first on The Brain Jar.