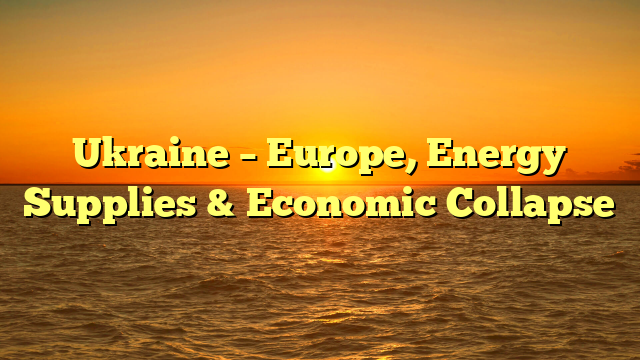 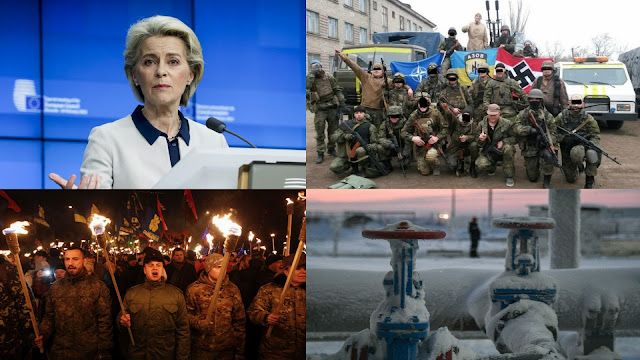 (This essay was published and shared on Global Research)

As the price of oil, gasoline and natural gas skyrockets around the world, we have come to a major crossroads in history that has the potential to usher in a massive economic collapse of Europe, the United States, and the world.

The additional economic hardships that will befall our communities due to the rising costs of energy, will most likely be blamed on Russia by a cartel of western nations, just as they blamed the self-inflicted economic hardships the world suffered over the last two years, on an orchestrated pandemic [01].

However, the economic energy crisis did not happen all of a sudden, nor was it one event that triggered energy prices to reach the unimagined levels they have reached today, around the world.

The energy crisis was triggered long ago by a series of violent events created by the United States and its allies for control of the declining energy supplies and resources around the world. Two Decades of War crimes that continue on oil producing nations such as Iraq, Libya, Syria, and Yemen, plus their crippling economic sanctions on major independent oil producing nations such as Venezuela, Iran and Russia, have brought the world to the brink of economic collapse.

All of these criminal actions can only be seen as resource wars, due to declining energy supply under the western nations control.

The invasion of Ukraine by Russia is a climactic moment, which culminated through a series of violent events in Ukraine that began by a western backed color revolution which then led to a coup and overthrew of the elected Yanukovich government in 2014. (See Two documentaries here [04] and here [05]) The following 8 years saw American, British, Canadian and European governments arm, train and fund violent elements within the Ukraine Military which then unleashed their genocidal belligerence on the Russian speaking population in the Donbass region.

The western funded operation in Ukraine was very similar to the one they launched on the Syrian people in 2011, which ultimately provoked Russia to step in by 2015 and help their Syrian neighbor, Bashar al-Assad, as Syria was overrun by western backed genocidal terrorists. Russia’s involvement was based out of fear that the western backed terrorist invasion, would spill over into Russia.

The only difference between the western operations in Ukraine and Syria is that the 2014 western orchestrated coup in Ukraine was successful, whereas the attempted terrorist coup on the elected leader in Syria, Bashar al-Assad, was not successful due to Russia’s decision to take an active role in the security of the Syrian nation in 2015. However, the U.S military is illegally occupying the oil producing areas in eastern and northeastern Syria where they are involved in the daily theft of Syrian oil. The U.S. government has also caused great economic hardship on the Syrian people through crippling sanctions, and the destruction of their grain supplies.

In Ukraine, where many of the Russian gas pipelines run through to Europe, the west has done exactly what the Russians feared, as they’ve armed, trained and funded ultra nationalist thugs with a genocidal mindset, that are focused on the Russian speaking people of Ukraine and Russia itself. (See Here [06] and Here [07])

The Russian’s are not playing games, they are deadly serious about protecting themselves from sinister overt and covert western operations against it. The western cartel of nations led by the United States, Britain and the European Union are playing a very dangerous game as they continue their insane belligerent terrorist foreign policy of arming and funding a terrorist army against the Russian Military. NATO’s forces might not be on the ground in Ukraine, but the proxy army of thugs that they armed and trained, is directly engaged.

Countries within this coalition of the insane, such as Australia, has even gone so far as to push for censorship and sanctions on anyone that brings truthful information favoring Russia’s side of the story [08]. In seems that the Australian government doesn’t believe that the ultra nationalists and Neo-Nazi’s in Ukraine exist and that 15,000 civilian deaths in the Donbass region are fake!

The denial and false narrative that Australia stands on, will most likely be adopted by the cartel of NATO nations as well.

“The American, Canadian and European leaders that support these fascists and Neo-Nazi’s in Ukraine, confirm what our western leaders are…I mean, who could support fascism but a fascist.”

Of special note here is that even as energy demand was drastically reduced over the last two years, gasoline prices continued to rise. Now however, we are at the cusp of economic collapse as the so-called pandemic disappears, business begins to resume, while energy demand rises with failing supply lines. All the while, western nations are sanctioning independent energy suppling nations and openly providing a steady supply of weapons to terrorists that the cartel of western nations support, but especially against Russia.

The world is indeed at a most dangerous crossroads, I mean, what insane mentality, pushes a nation to self destruct morally, politically and economically? I never imagined, that I’d see this in my lifetime, a collective suicide by a block of nations.

The price of the European Union’s interference in Ukraine since 2014 along with their warring economic sanctions against Russia will continue to unfold in the coming days, weeks and months, and it’s guaranteed to bring hardship on the European citizens due to higher energy prices, mass inflation, unemployment, food scarcity and eventually population revolt. These are the direct consequences that come from the U.S. and European Unions economic and covert terrorist war on Russia.
Europe and the United States have shot themselves in the foot due to their belief that they are in a position of power over Russia…they aren’t, that’s just pure supremacist hubris, because both Europe and the United States are dependent on oil to sustain their economies, but especially Europe who is dependent on both oil and natural gas, of which they have very little, and depend on Russia for a large portion of their supplies. (40% of the E.U. gas supply comes from Russia).

To date, even though the European Union have imposed massive economic sanctions on Russia, the Russian government has not turned off their gas supply to Europe.

The exponential rise in energy prices, are not Russia’s fault. Russia continues to deliver gas and oil supplies to Europe. It is the United States that has a dictators influence over Europe.

The U.S. government drives the economic war on Russia, which includes disrupting or stopping all future energy lines that they do not control to Europe.
Europe’s energy problems would go away overnight if the USA was not involved. The Nord Stream II gas pipeline from Russia to Germany is now complete, and ready to supply energy to Europe but the project is facing political opposition that stems from the United States to their vassal European partner Germany.

Iran is still waiting to make energy deals with Europe but have been blocked, sanctioned and threatened by successive U.S. governments who have isolated Iran from being an energy provider to the west. The United States simply refuses to cooperate with the Iranians.

Libya was a large independent oil and gas provider to Europe, that is until the U.S. and NATO destroyed the entire country and disrupted its energy supply lines to Europe…

At the moment, the rising price of gas in Europe is fostered by the US governments desperate attempt to keep Europe under its energy control by sabre rattling with Russia via Ukraine. In a twisted way, it makes the US LNG plan, affordable, even though U.S. gas is 3 times more expensive than Russian gas.

The main goal of the United States Government is to keep Europe under its political and economic control. As long as the U.S. can supply or guarantee oil and gas supplies for its European allies, the United States will remain as a significant world power.

However, in the American’s eyes, if Europe was to continue buying cheaper Russian Gas and oil while continuing economic trade with the Russians, the United States would find itself somewhat reduced from being a dominant partner to one of irrelevance. If Europe was smart, they would stand up together against to the American bully and look to their survival.

So, if the E.U. does not grow a spine of their own, the European position and support of belligerent elements in the Ukraine government, which includes Neo-Nazi’s, will hasten the end of the European union as we will see in the near future when energy becomes the fine line between economic survival and economic disaster of the individual European nations. EU members will begin to break away from the anti-Russian coalition and make energy deals with Russia which by nature will open up badly needed economic trade routes for them…that is if we do not have a World War before this happens…

There is a joke circulating on the internet that just might be the epitaph for the hardcore European Union nations; it goes like this:

Q: What did the European Union use for lighting in their homes before candles?

Stewart Brennan is a Geo-political and economic analyst, activist, blogger and author. He’s worked in the Aviation, Packaging, Transportation and Logistics Industries and is the author of “The Activist Poet”, two books of political activism and poetry. (See Here and Here) He’s also the author of several blogs including World United News and World United Music and a contributor on Global Research.