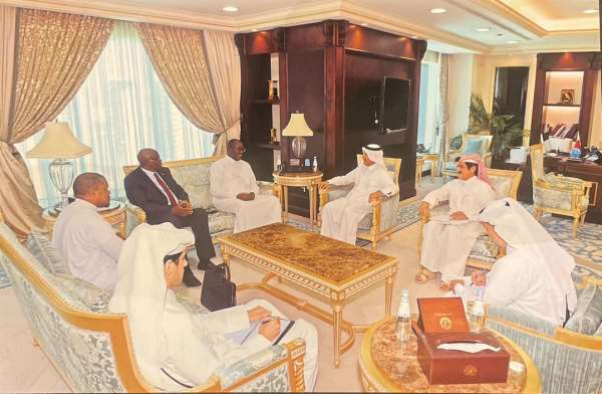 Others in attendance included Ambassador Abdullah Aljaber, Director Africa Affairs at the Ministry of Foreign Affairs, State of Qatar and support staff at the Ministry.

Following a warm welcome by the host, Dr. Ahmed, the Permanent Secretary, Hon. Bagiire, on behalf of the government of Uganda, congratulated the State of Qatar on the occasion of their 51st National Day. He saluted Qatar for the great achievements which have been registered by the respective government of the Al Thani leadership, since the independence of their country.

Hon. Bagiire Congratulated the State of Qatar for the successful organization of the 2022 FIFA Football World Cup, which he described as the best compared to the previous three editions, which he had watched and was in position to make judgement about.

He commended the high level of commitment and exceptional service, delivered by the Qataris during the just completed football tournament. In the spirit of sharing the experience and benefits achieved by the State of Qatar, the Permanent Secretary asked his host to support Uganda in areas of sports which may include exchange visits for the national teams of the two countries.

He appreciated his host for welcoming and engaging with several official delegations from the government of Uganda over the years. He commended the contribution of the official exchange visits from both sides towards
enhancement of bilateral cooperation between the two countries at all levels.

He promised that during the new year of 2023, more visits should be expected from the government of Uganda, including the Honorable Minister of Foreign Affairs of the Government of Uganda. He invited his host for a reciprocal visit to Uganda in 2023.

He respectfully conveyed a reminder about the invitation H.E. President Museveni extended to His Highness the Emir for a reciprocal visit to Uganda. The reminder was officially delivered in February 2022 by Rt. Hon. Amama Mbabazi, former Prime Minister of Uganda and Presidential Special Envoy.

He affirmed the readiness of H.E. President Museveni to warmly welcome His Highness the Emir to Uganda and to treat him to the highest level of hospitality in the Pearl of Africa.

The Permanent Secretary thanked the government of Qatar for the support to Uganda’s educational sector, through the Qatar Fund for Development.

He commended the government of Qatar for offering job opportunities for Ugandan migrant workers and expressed government’s readiness to sign the pending bilateral labour agreement between the two countries. He placed emphasis on the need for white collar jobs in different areas.

In the areas of commercial and economic cooperation, the Permanent Secretary expressed Uganda’s desire to elevate cooperation with the State of Qatar to higher levels, to serve mutual interests of the two countries and their people.

The Permanent Secretary commended the efforts of His Highness the Emir of the State of Qatar in the areas of peace, justice and equality at the international level. He extended an invitation to Qatar to attend the conference of the Non-Aligned Movement due to be held in Uganda in 2023, and asked for support for the conference from the host Government.

Others issues raised by Hon. Bagiire included a proposal to his host for a waiver of visas to both diplomatic and official passport holders between the two countries. He thanked the government of Qatar for offering Uganda with scholarships and requested for more scholarships especially in the area of Information Technology.

During his turn to Speak, the Secretary General Dr. Ahmed Hassan Hammadi commended the level of cooperation between the two countries. He affirmed the readiness of the government of Qatar to sign a memorandum of understanding that would provide for the waiver of visa requirements for both diplomatic and official passport holders. He suggested that Uganda should come up with a draft and the Qatar side would take the responsibility of fasttracking it and to bring the matter to a conclusion in the shortest possible time.

Dr. Ahmed Hassan raised concern to his guest about the need to elevate the level of engagement between the two countries. In remedy of the foregoing, he proposed to have routine meetings between the two ministries of foreign affairs.

With respect to the Non-Aligned Movement Conference to be held in Uganda in 2023, the Secretary General asked for details to look into the possible areas of cooperation and support.

The Secretary General assured his guest and his delegation that Qatar is interested in economic cooperation with Uganda in different areas which include tourism, the hospitality industry, trade exchange and agriculture.

In a parting shot, made tongue-in-cheek, Dr. Ahmed commended the brotherly relations between the two countries. With specific reference to the attire of Hon. Bagiire, who was dressed in a Qatari thaub (Tunic/ Kanzu), he jokingly said it was a great sign that indicates Uganda enjoys a special relationship with Qatar, prompting laughter by all attendance, as they made their way out of the venue.

Accompanied by both Ambassadors Dr. Chebrot and Dr. Ssemuddu, the Permanent Secretary later made a courtesy call on H.E Ambassador Ibrahim Fakhroo, Chief of Protocol, Ministry of Foreign Affairs of the State of Qatar. The two exchanged words of commitment to raise the quality of the relationship between the two countries.

Hon. Bagiire paid a courtesy call on the Embassy of Uganda in Doha, and met with Embassy officials. The Deputy Ambassador at the Embassy, Ambassador Mohammed Baswari Kezaala briefed the Permanent Secretary about the mission’s programmes on commercial diplomacy and affirmed readiness to pursue it working with the Ministry Headquarters to bring on-board other MDAs.

Dr. Stephen Chebrot, Uganda’s Ambassador to Qatar, expressed his gratitude to Hon. Bagiire for visiting the Embassy of Uganda in Doha. He commended the Permanent Secretary for the support aimed at enabling it to perform to its expectation.

Ambassador Dr. Rashid Yahya Ssemuddu, the Presidential Special Envoy to Qatar, appreciated Hon. Bagiire for sparing time to visit Qatar when many would be on holiday, and to engage particularly in commercial diplomacy.

He affirmed his readiness to elevate his efforts, working with Ambassador Chebrot, and his Deputy, Ambassador Mohammed Baswari Kezaala at the Embassy of Uganda in Doha, to promote Uganda as a trade and investment destination.

Together with Ambassador Ssemuddu, the Permanent Secretary met with members of the Qatar business community with interest in investing in Uganda in the areas of oil and gas, hospitality, mining and real estate.

The post Uganda, Qatar MOU in the Offing for Visa Free Entry to Diplomatic And Official Passport Holders  appeared first on Watchdog Uganda.