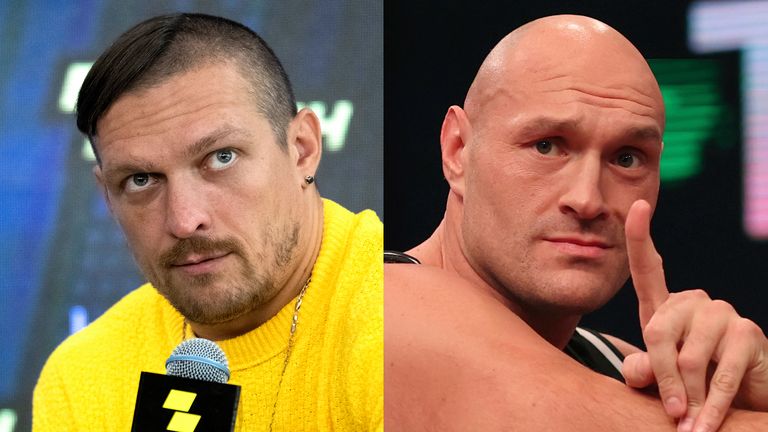 There’s no reason why this fight can’t take place. Tyson Fury vs Oleksandr Usyk will answer so many questions for everybody.

Usyk’s got an amazing reputation. Tyson Fury defied all the odds, continually doing so. I think it’s the perfect match-up for two unorthodox fighters. It’s going to split opinion.

In my opinion I’d say Tyson Fury will win. He’s too big, too smart, too strong, in and out of the ring.

But I think it’ll be lost in translation if he tries the old mind games.

Promoter Bob Arum reveals that Tyson Fury and Oleksandr Usyk have agreed to fight each other, but the date and location are yet to be set

Fighting doesn’t just begin in the ring. It’s the mental aspect, it’s the build-up to it, it’s how you approach the fight.

But Tyson Fury has proved himself to be a fully-fledged fighting man, and a big one. It’ll be Usyk that has to prove: ‘no matter how big you are, I’m going to make you fall’. I’m going with Tyson Fury on this one.

I think he will prove his dominance as a world heavyweight king by beating Usyk. I really do think he will do that. Usyk’s an outstanding fighter and Tyson Fury’s answered all the questions and proved everything that he can in boxing, in all different ways against all shapes and sizes. Again I think it’s a great vision for heavyweight boxing next year.

I think it means the world to both fighters. But I think Tyson Fury would struggle if he lost, the pressure is on him to make sure he pulls this fight off.

Uysk is up against a fully-fledged, officially successful, unbeaten heavyweight and you can’t get many bigger than Tyson Fury. For Tyson Fury on the other hand, remember all the insults he’s thrown at Usyk, such as ‘he’s only a cruiserweight’ – if you say things like that, you make bold predictions and bold accusations, you’ve got to back it up.

I think the timing for the fight is right. For Usyk he’s not a naturally big heavyweight. He struggles to keep the weight on. He doesn’t look a big unit so he’s got to build up slowly but surely so he’s got to work to a plan. Just because you don’t see these guys perform publicly doesn’t mean they’re not doing anything privately behind the scenes and he’s far too schooled, professional, he’s got too much depth to make such a silly mistake.

Wherever they did it. I think that fight will be big.

I’d love it to be here in the UK. The UK fans are the best in the world. The greatest supporters in the world next to the Mexicans but I do think money talks. I do think that they’ll go where the dough is.

You’ve got two class fighters that will produce a top-draw fight. This fight could go so many different ways but I think it’s a day of class.

I think if Fury beats Usyk, his only problem will be challengers, finding suitable challengers. Will he go for gimmick challengers? You’ve seen him against Derek Chisora who he beat twice before that latest fight. Will he go for those kind of shows? In boxing you always need a dance partner. You always need that challenger. Of course here in the UK it’s Anthony Joshua, no matter how much he relishes that fight happening or disses it.