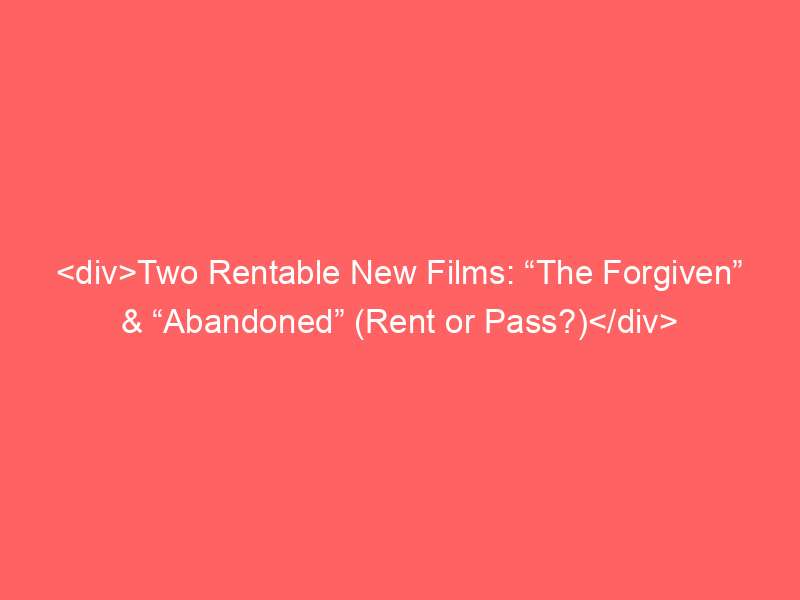 We checked out two new films recently, I’ll give you an idea about them to save you the time.

After checking out the trailers on my Guide movie-for rent list, I narrowed the choices to “The Forgiven” or “Abandoned.”

“The Forgiven” starred Ralph Fiennes and Jessica Chastain, a big plus. It was on Amazon Prime and the price of each was $7.95 to rent. The rating by the audience on IMDB was only 5.8 out of 10, but these two are Oscar caliber actors. Plus, I liked another co-star, Christopher Abbott, who dallies with the married Jo Henninger in the film while her husband is away.

We watched “The Forgiven” first, and that ended up being the better choice. It is a well-crafted film with a plot set in Morocco and examining what happens when a couple on their way to a wedding accidentally hits and kills a young man on the dark highway who is selling fossils. (Apparently, selling fossils is a big industry for the locals. Who knew?) It also had an appearance by Christopher Abbott, who I knew from “James White,” where he played Cynthia Nixon’s son, and “It Comes At Night” in 2017—a horror movie that never quite delivered on the successful atmospheric brooding cinematography of Director Trey Edward Shults.

IMDB describes the plot this way: “The Forgiven takes place over a weekend in the High Atlas Mountains of Morocco, and explores the reverberations of a random accident on the lives of both the local Muslims, and Western visitors to a house party in a grand villa.: Director James Michael McDonagh filmed on location; we get an inside look at the Arabic culture in what appears to be one of those countries that our former president described as “a s***ole country,” The folks flocking to the villa in the middle of nowhere appear to be either Euro-trash or, as one is identified, the style editor from a famous women’s magazine, which shall be nameless for the intention of this review.

Jessica (Chastain) and Ralph (Fiennes) are an unhappily married couple, Jo and David Henninger, on the verge of divorce. After David hits and kills the young native boy, the authorities are contacted. The boy’s father comes to the villa and demands that Ralph accompany him back to the desolate village from whence he came. We learn that the young man (Driss) might have been planning to rob some of the rich party-goers with another youth.

Should Ralph Fiennes’ character of David Henninger accompany the dead boy’s father back to Driss’ village? If he does, what will happen? Fiennes does accompany Driss’ dad, but what happens after that, while a satisfactory surprise ending, is still one that I am processing.

“Abandoned,” on the other hand, held the promise of a young woman (Emma Roberts) suffering from post-partum depression who has recently given birth and moves, with her husband (John Gallagher, Jr.) to a remote haunted house (which, the end-of-film credits tell us, was located in Smithfield, North Carolina.)

The house had a history, but the price was right. The previous family had a psychotic father who impregnated his underage daughter three times; it is hinted that he had a way with an axe. An old wardrobe in the house seems to be the entryway to a portion of the house where some of the offspring of the underage daughter of the house live on as ghosts, [as in “American Horror Story.”]

Most of the film consists of the vulnerable Emma (Roberts) trying to work through her depression and deal with her infant son, who has a bad case of colic. Michael Shannon enters for roughly 20 minutes of film time, which is a crime in and of itself. Shannon plays the brother of the poor underage sister and he shares the couch with Emma Roberts discussing his life in the house before its occupants met untimely ends.

The movie is a total waste of the talents of an actor as talented as Michael Shannon. For that matter, the script did no favors to the young couple, both of whom are good actors.

I am glad we began our viewing with “The Forgiven,” which at least had a structure that merited sticking with it to the end, but I cannot give a thumbs-up to “Abandoned.” The films rented for $7.95. In one case it was money well spent. In the other it was a waste of time and money.