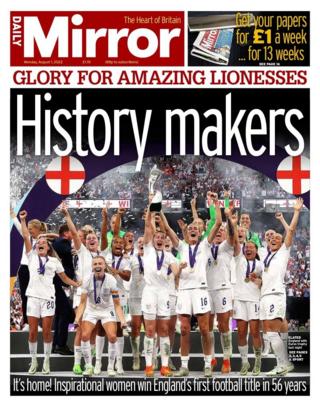 England fans are finally able to say it: football has come home.

Does it get much better than that? Here are the best comments from both fans and social media.

Captain Leah Williamson, who plays for Arsenal, called the victory “the start of a journey”.

The 25-year-old defender said: “The legacy of this tournament is the change in society.”

Chloe Kelly, who scored the winner in extra time having come on as a substitute, has had an incredible personal journey.

And there were some proud parents in the stadium…

Fans have been sharing what the win means to them.

Writing on the Match of the Day Facebook page, Nikki Plaw wrote: “Very impressed with all the ladies throughout the whole tournament. You are a truly inspirational bunch. A massive congratulations to you all. I can’t wait to see the effect this has on the young girls of our country!”

Angela Denton wrote: “Well done Lionesses. You have made us proud and we can finally say for real: IT’S COMING HOME.”

One of the top-rated comments on the BBC Sport website was from poster Mr Carlton, who wrote: “After decades of supporting the England men’s team and being let down by impudence from players, bad luck and negative tactics – this tournament has been beautiful. Thank you, ladies, superb and well deserved.”

Another poster added: “Well done Lionesses, you have made England proud and given women’s football in this country a mega shot in the arm. Beating the eight-time champions is a thing of beauty and a massive, massive triumph.”󠁧󠁢󠁥󠁮󠁧󠁿

One fan on the BBC Sport website shared a personal story: “10 years of taking my daughter to training and matches, watching in rain and snow, consoling her when they lost, totally worth it when I saw her face when England won, and they lifted the trophy!”

Another wrote: “This is the beginning of women’s football. They are trailblazers and I am hoping it continues to grow. Go to games. Get involved. See the big picture.”

One male football fan on Facebook shared his experience of how the tournament had changed his own outlook, saying: “I’ve gone from, ‘women’s football is a joke” to, ‘I can’t wait for the Women’s World Cup’ this evening. I stand well and truly corrected, not because they won, because of how much it meant for them to win and watching them comfort the German ladies – what football is about.”

There were stories all over Twitter of young girls enjoying the match.

And, of course, no-one enjoyed it more than young Tess, the eight-year-old who became famous after her own stomping rendition of ‘Sweet Caroline’ at the semi-final against Sweden. She was invited to the Wembley final and given 23-year-old forward Alessia Russo’s match-worn shirt.

Front page of the Mirror