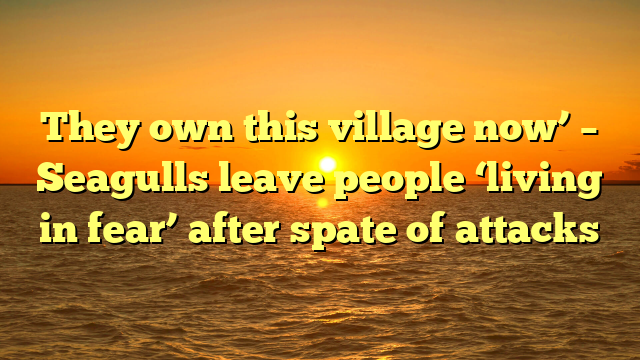 The attacks left a number of people needing hospital treatment. One resident, who has lived in Llanfairpwll for many years, said seagulls have been causing “havoc” in the village over the past few months. Gareth Parry said it is a problem that is “worse than it has ever been”.

Several residents have required medical treatment and tetanus shots in recent months due to seagull attacks.

Mr Parry said that one woman was “quite badly hurt” after falling on her arm while being mobbed by a group of seagulls.

The 70-year-old thinks twice now before leaving the house in case he is swarmed upon.

Speaking to North Wales News, Mr Parry said Anglesey Council needs to do more to address the issue in the village.

He said seagulls can be aggressive around their chicks and, as the population in the area grows, more problems occur.

Some primary school pupils have been too afraid to attend school because of the seagulls.

Reports suggest the seagulls have been descending on people after nesting on a nearby building.

Mr Parry said: “This is a problem that we’ve been having every summer for years now but this year it’s even worse.

“Once the seagulls have their chicks, they become extra aggressive to the point where you think twice about leaving the house.

“They nest near the houses, on the streets, and across the village centre, and if you get anywhere near one of them, you’ll get attacked by three or four of them.

“Some people I know have had to go to hospital for tetanus shots and there was one woman recently who injured her arm quite badly after falling while being attacked.

“I was talking to people on my street the other day and they said they won’t take their dogs out for a walk because they’re afraid of being bombarded – it’s that bad.

“It’s like being back in lockdown for some people, but at least in lockdown you could walk your dog without being attacked.”

He added: “Before the schools shut for the summer holidays, some of the pupils were afraid to go in because the seagulls had nested in the building next door.

“I know of some of them who didn’t go to school in fear of being divebombed by seagulls on their way in the morning.

“When the chicks start to grow and walk around the village by themselves, that’s when the problems seem to start. The seagulls are obviously protective of them and they’ll attack anyone who comes anywhere near them.

“I’ve had them dive towards me but I’ve not been bitten or attacked yet. If there’s a chick anywhere near my garden, I know I won’t be able to go out because I’ll just get pounced upon.

“The problem goes away towards the end of the summer normally but it’s getting worse now year on year. I think if the problem continues next year, people will start to take things into their own hands.

“If I could, I’d send my council tax to the seagulls because they own this village now. Something needs to be done, so many of us have complained to the council but nothing is being done.”

All species of seagull are protected under the Wildlife and Countryside Act 1981.

The RSPB website says: “This makes it illegal to intentionally or, in Scotland and Northern Ireland, recklessly injure or kill any gull or damage or destroy an active nest or its contents.

The post They own this village now’ – Seagulls leave people ‘living in fear’ after spate of attacks appeared first on WorldNewsEra.