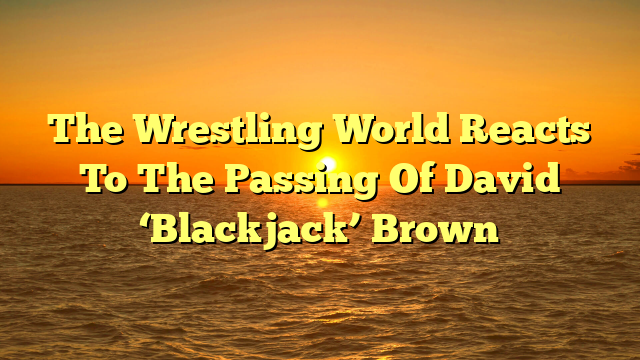 According to a report from Pwinsider, wrestling writer and photographer David ‘Blackjack’ Brown passed away on Friday night.

Brown had been involved in the pro wrestling business for decades, dating back to the days of newsletters, fanzines and Madison Square Garden WWWF programs. Additionally, he wrote columns for the Chicago Sun-Times and the New York Daily News‘ “Slammer” column. He also had a 900 phone line for wrestling news before the internet came about.

Following the news of Brown’s passing, Taz, Tommy Dreamer, Big Vito, The Blue Meanie, Justin Roberts and others took to Twitter to react. You can check out some of their tweets below:

Blackjack Brown helped a lot of people in the business & was a great human which is rare in wrestling. He never asked for anything, except how could he help. I was lucky to reconnect with him when @JustinRoberts called him as we were looking for Owen Hart pix. RIP Blackjack Brown https://t.co/cx8apcCxU5 pic.twitter.com/tz4Gq4BvF3

Sad to hear about the passing of Blackjack Brown. He was always so supportive of ECW, ROH, indie wrestling in the NY Daily News. Every time I saw him he had a smile on his face. RIP

Many fans might not know BlackJack Brown but he was very important in the biz behind closed doors…trust me. He was ALWAYS positive & always busting chops! Just a super guy! He was very instrumental in helping me behind the scenes early in my wrestling career. RIP Brother

Saddened to learn of the passing of Blackjack Brown. He was not only a wrestling photographer but an asset to wrestling in so many ways. Rest In Peace my friend!!

Just read BlackJack Brown passed away. As a young and upcoming wrestler he helped put me on the map. Saw him a few months ago. Thank you always my brother. A true gentleman and lover of the sport of Pro Wrestling. Remembering the good times right now. @apter1wrestling pic.twitter.com/YdbFUHG73c

The post The Wrestling World Reacts To The Passing Of David ‘Blackjack’ Brown appeared first on WorldNewsEra.