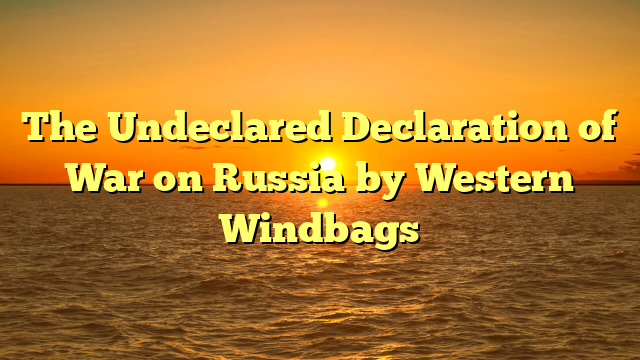 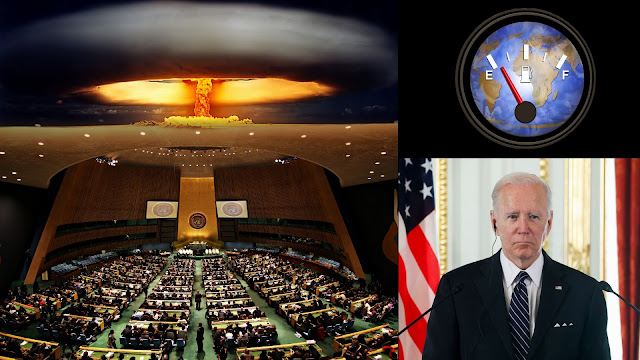 (This Essay was Published and shared on Global Research)
By: Stewart Brennan

As the western proxy war with Russia in Ukraine begins turning in favor of the Donetsk & Lugansk Peoples Republics [01], the western cartel (i.e.; the U.S., E.U., U.K. & Commonwealth nations ++) are continuing to ramp up their war rhetoric and economic sanctions on Russia while sending vast amounts of military weapons to the Ukrainian military.

Meanwhile, every single government that continues to support the illegitimate evolved western backed coup government in Ukraine and their all-out sanctions war on Russia, now have bigger things to worry about which comes at the expense of their own economies as panic ensues regarding the fallout of their supply lines, food, energy, security, and runaway inflation that is gathering momentum while they blame Russia for their own short sightedness. (See Here [02], Here [03], Here [04], Here [05] and Here [06])

I suppose its easier to blame Russia than to shoulder the blame on themselves, considering that rising public discontent due to these economic realities will eventually come back to bite them in the a$$. And yes, the thought of economic uprisings throughout the European Union is not far from reality as we continue down the road of high energy costs and inflation.

The stark reality is, that those who govern us in the western nations are solely to blame for unleashing the proverbial four horsemen of the apocalypse in their belligerent quest to control global economics since the fall of the Soviet Union in 1991.

Now, in 2022, experts from around the world are sounding the alarm bells of economic disaster, famine, disease, war and widespread death while the same coalition of monsters, US, UK and EU wage a proxy war on Russia through Ukraine with no signs of ending anytime soon.

War on Russia and China

How far will the western pariahs go in bringing us closer to WWIII? 40 billion US dollars now approved and earmarked for Ukraine to wage war on Russia [07] is a huge step in that direction.

The USA and its European vassals have also continued their isolation of and economic war on Russia while the U.S. military continues to occupy Europe via NATO [08] with over 140,000 + troops spread out across the continent running joint military exercises on the Russian border.

Finland and Sweden who were once neutral countries have made formal applications to join NATO [09] causing another uptick in tensions between the west and Russia.

Although, two members of NATO (Turkey and Croatia) have publicly stated that they do not approve the Nordic states inclusion into NATO, (See Here [10] and Here [11]) it is believed that the Americans will eventually find some form of deviant compromise to get them to change their minds and approve Finland and Sweden’s inclusion into the NATO gang.

Every step the US & EU makes, brings us closer to war and economic collapse.

You can be sure the western economic cartel of nations led by the U.S. military won’t lie down and accept the economic losses that they inflicted on themselves over the past 20 to 30 years in their resource and sanction wars. Collapse is now knocking in the USA, UK and Europe, hence, their current level of insanity and baited plans that continue against economically independent oil producing nations like Russia, rather than accepting them as equals or even business partners.

Since the USA started the 2nd cold war in South Ossetia against Russia in 2008, almost everything that doesn’t go the west’s way is blamed on Russia…somehow the west has a “🤡 Pox” upon them as they begin losing ground in their battle of horse shoes and hand grenades…and NOW, those that handle U.S. President Joe Biden have given him the nod to threaten China by saying that Washington is willing to use military force to defend Taiwan [12] if the Chinese try to take Taiwan by force.

It appears that America’s agreement to China’s “one China policy” is mere rhetoric and does not apply as the Chinese may have believed. Is anyone surprised by Joe Biden recent declaration? I mean, was President Brandon prompted to say it, or was that his dementia speaking what was always unspoken? What do you think China’s response [13] will be? You can be sure they won’t sit on their hands as this subject makes them crazy, so a more rigid position against the global NATO powers will be forth coming.

I use the term “Global NATO powers” because the USA always speaks in gang talk. NATO is a “You fight me you fight my gang” kind of group and so we can expect more of this alignment against China and Russia going forward which includes the regional U.S. occupied powers of Japan and South Korea.

Since the first cold war against the Soviet Union shortly after World War II, the U.S. superpower and leader of the “free World?”, has threatened weaker, non-aligned nations economically and militarily if they or their European vassal’s corporations, did not get what they wanted in terms of resource extraction, this is especially true when it comes to energy resources. All of which has been conveniently labeled throughout the years in their war-like press conferences as, “threats to THEIR Economic Interests”.

However, in 2022, the global American bully is no longer a leader of anything, with the exception of hubris and a gang of impoverished paper wind bags. The leaders of Germany, France, Britain, Poland, Norway, Canada and many others in the NATO circus are militarily small and depend solely on the American Military to do their bidding. All of which has been extremely provocative to the levels of insanity.

After all, reading the same US teleprompter rhetoric as president Joe does, makes their nations threats towards nuclear powered Russia laughable but scary at the same time. The threat of war does not inspire confidence in paving a way back from the economic and long-term damage they are causing…

The term “impoverished paper windbags” applies especially to petty dictators like Canada’s Justin Trudeau who clearly demonstrated that he’s lost his marbles when he turned on his own people with the war measures act during peaceful protests. A brutal action which is the stuff that dictators do to their own people. I mean seriously, is this how we, “Build back Better”?

But, Canada’s pip-squeak leader aside, Britain’s Boris Johnson certainly leads the contest as the hot air king of the century with his delusional perception that there is still a powerful British economic and military Empire intact to wage war on powerful nations that don’t comply with British government dictates. That delusion is already coming home to roost as Briton stares full-on economic hardship in the face. (See Here [14] and Here [15])

On this serious note, it’s important to say that if western governments with clowns like Boris Johnson and Joe Biden are not forced to come to their senses soon, the consequences for the people of our nations will be disastrous and will heap misery on endless generations to come, if indeed we are to survive that long.

The British, American’s and the NATO gang, are far behind the Russians in military technology, while China has also surpassed them all technologically. So why open a suicidal two-front war?

The NATO gang, with its incompetent U.S. leader, are famished economic skeletons that have dwindling support of their own people at home. People are growing more-angry and impatient with their governments by the day. Populations tend to get that way after having discovered that they’ve been lied to, have their freedoms taken away, and face a growing systemic totalitarian governance while their bankrupt economies plunge into the abyss of inflation and scarcity. History provides many great examples of what comes next.

Although we do live in the age of the Internet it is also the age of censorship and mass propaganda campaigns made to confuse people about what is really going on. However, poverty always has a way of opening eyes…

The rapid decline of the U.S. global hegemon is on an economic and military war footing around the world with the global population caught in the middle. Poverty, the high cost of Energy and runaway inflation are now rearing their heads everywhere and so the prospect of military conflict looms as the ongoing economic war with Russia and China continues on two fronts [16]. War is no longer just a possible distant threat, it’s already here as the economic wars on both China and Russia have shown. How far will the western pariahs go?

If depopulation is the objective as United Nations agenda 2030 states, then we are at the cusp of that depopulation right now with one long winter away from a major die-off as the web of poverty that follows economic collapse will be enough to achieve their goals.

It should be abundantly clear that the disease obsessed, windbag politicians of the west have made everyone pay for their insane decisions, the consequences of which are still unfolding.

How much longer will we allow their insanity to continue? 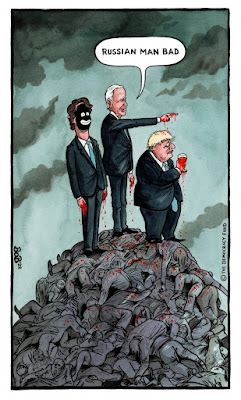 Stewart Brennan is a Geo-political and economic analyst, activist, blogger and author. He’s worked in the Aviation, Packaging, Transportation and Logistics Industries and is the author of “The Activist Poet”, two books of political activism and poetry. (See Here and Here) He’s also the author of several blogs including World United News and World United Music and a contributor on Global Research.

[01] New Coalition of the Willing for Retreating Ukrainian Forces
[02] Exploding prices, energy and aviation crisis: What will the blowback be from anti-Russia sanctions?
[03] Global economy in worst shape since WWII — IMF
[04] Fuel poverty to hit British households, energy chief warns
[05] Global food catastrophe imminent – The Economist
[06] France starts handing out food stamps – media
[07] Biden signs $40 billion Ukraine aid package
[08] Plan for US troops in Europe revealed
[09] Sweden and Finland’s leaders are taking their people down a dangerous road
[10] Finland and Sweden can’t join NATO until Turkey’s concerns are met – Ankara
[11] Another NATO leader voices opposition to Sweden and Finland
[12] US Ready to use Force to Defend Taiwan
[13] China hits back at US over Taiwan
[14] UK sees highest inflation in 30 years
[15] Britons told to get ready for a ‘truly horrific’ winter
[16] Top US General warns of conflict between great powers