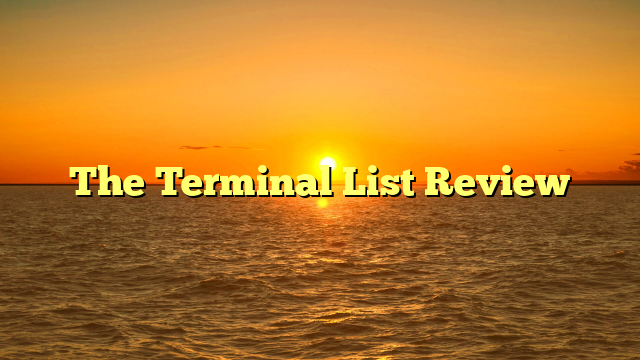 A Navy SEAL is the only survivor of what appears to be an ambush but his memory of the incident is different to what the experts say happened.

I love the fact that we live in an era of television where the small box now has the power to draw big name stars to its product, but that it is also a time where producers and directors seem to want to make each episode of a television show feel like you a feature film.

The latest offering from Prime Video, The Terminal List, certainly ticks both of these boxes. This feels like someone has taken an episode of NCIS and infused it with the action and budget of Liam Neeson’s Taken franchise… and I’ve got to say that this is the perfect mix for me.

Based on a novel by Jack Carr The Terminal List opens with decorated NAVY Seal James Reece (Chris Pratt – Jurassic World) leading an attack to bring down a notorious chemical warfare expert. The whole mission goes horribly wrong and only Reece and one other soldier survive, Boozer (Jared Shaw – The Tomorrow War)… or at least that is how Reece remembers it.

I saw that because once Reece gets back to the USA he is told that Boozer actually killed himself two days previously, something that is news to Reece who had a beer with him the night before. Then the audio of the actual attack seems to go against Reece’s account of the events and what he remembers happening.

Soon everyone around him is saying that Reece’s PTSD is causing him to have issues with his brain while he becomes convinced that the hierarchy above him are out to get him. He turns to his best friend, a man he considers his brother, Ben Edwards (Taylor Kitsch – Friday Night Lights) and dogged journalist Katie Buranek (Constance Wu – Crazy Rich Asians). Soon as Reece’s bid to seek out the truth intensifies the body count begins to rise and he finds himself a wanted felon suspected of multiple murders.

I will admit that I am junkie for these kinds of shows. The fact that I can sit down and watch shows like Jack Ryan and Jack Reacher where it feels like every episode is an action film is some kind of utopia for me. The same can be said for The Terminal List. It didn’t take long for this series to have me salivating over it – the moment that the screenwriters delivered the twist of Reece’s best mate Boozer killing himself when Reece clearly remembers seeing him the night before I was hooked.

There was another event that drew me in even more, but I can’t talk about that here because it would be a major spoiler. Let’s just say that the writing and directing of the show is so good that you don’t see it coming and the result hits you a John Reece butt of the gun punch to your face. It changes everything with the series and certainly raises the stakes with the story at hand.

I found The Terminal List so captivating that there is no way that you could just sit down and watch one episode. I love the fact that it has been written so that every episode finishes with a cliff-hanger, although given my need to binge watch the series episode after episode I can safely say that my sleep patterns were not a fan of it… but that does give a testament to just how well this show is written.

I’ll admit that I did go into the show wondering how believable Chris Pratt would be in a dramatic role and how believable he would be as a NAVY Seal, but I need not have worried because this is perhaps the series that shows us just how far Pratt has come with his acting. His performance here is well and truly beyond what we have ever seen him do in the Marvel or Jurassic World franchises. Whether it be a fast paced action sequence or a scene of real emotion as his character is put through emotional hell he delivers perfectly.

He is well supported by Taylor Kitsch who I still feel is one of the Hollywood’s most under-rated actors. His performance here hails back to the real dramatic skills that he had to show in Friday Night Lights and to me he plays one of the most interesting characters in The Terminal List.

I found The Terminal List to have a little bit of everything for its audience. In some parts it is a well written emotional drama, it depicts political spin in a serious yet scathing manner but best of all as an audience it constantly has you guessing whether Reece is the right or whether or not everything that is happening is a figment of his imagination.

With the right mix of intense action and all the suspense of a good crime thriller this is one series that needs to be on your ‘To Watch’ list.