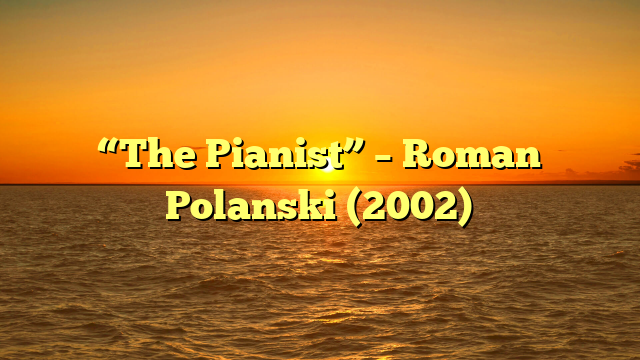 The Pianist (2002), the story of a Polish concert pianist’s harrowing experiences during the German Nazi occupation of Warsaw in World War II, has been perhaps famed film 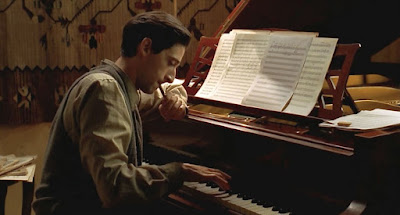 director Roman Polanski’s most lauded work [1,2,3,4,5,6,7].  It won the Cannes Film Festival’s Palme d’Or, and it was nominated for seven U.S. Oscars, winning three of them (for Best Director, Best Adapted Screenplay, and Best Actor).  The film also won the British Academy of Film and Television Arts (BAFTA) Awards for Best Film and Best Direction, and it won seven French Césars (the French national film awards), including those for Best Picture, Best Director, and Best Actor.  In addition, the Internet Movie Database (IMDb) currently has The Pianist ranked 34th on its list of all-time greatest films [8].  So we are dealing here with a film that may be headed for status as a classic.

The story of The Pianist is based on the experiences of a real person, Wladyslaw Szpilman, who was a young Jewish pianist living in Warsaw when the Nazis attacked and invaded the city in 1939.  In fact Ronald Harwood’s screenplay for the film was adapted from Szpilman’s personal memoir, Smierc Miasta. Pamietniki Wladyslawa Szpilmana 1939–1945 (Death of a City: Memoirs of Wladyslaw Szpilman 1939–1945), which first appeared in Polish in 1946.  A significant additional background feature that undoubtedly had further impact on the telling of this tale was Roman Polanski’s own personal experience as a young Jewish boy who somehow managed to escape from the Nazi Krakow Ghetto during the war.  On account of this background, The Pianist may be one of Polanski’s most personally felt film accounts. 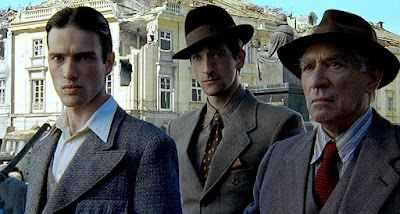 The film begins in 1939 with Wladyslaw Szpilman (played by Adrien Brody) performing a piano piece on-the-air at a Warsaw radio station.  Just then the building is subject to a cannon fire attack by the invading German army.  Everyone flees except Szpilman, who continues playing on the piano.  But finally, with the cannon fire now destroying the wall of the studio Szpilman is in, he is forced to face reality and flee, himself.  This hesitancy here on the part of Szpilman to shift his focus and react to the threats around him will be a metaphor that is repeated throughout the story.

Szpilman belonged to a well-off Jewish family, and Jews had long been well-treated in Poland.  But the invading German army are shown to be almost uniformly ruthless and cruel – and they are particularly vicious towards Jews.  They seem to shoot and kill civilians on the street just out of whim – and then they laugh about it.  The people are powerless to respond.  Soon the Szpilman family is moved, along with all other Jews, to the walled-off and encapsulating Warsaw Ghetto.

In 1942 Szpilman and his family are to be transported to the Treblinka extermination camp when an acquaintance who is collaborating with the police recognizes Wladyslaw and pulls him away just as he is about to be forced into a departing train car.  In the subsequent confusion, Wladyslaw manages to escape and find a temporary hiding place in the city.  This is just one of the many out-of-the blue strokes of good fortune in the tale that save Wladyslaw from imminent annihilation. 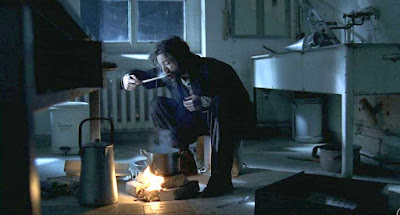 Over the next few years Wladyslaw is compelled to move from one hastily-found hiding place to another just before he is about to be exposed to the authorities.  Sometimes he is helped by non-Jewish friends that he encounters, but most of the time he finds himself alone in abandoned buildings and without food.  During this time, he sometimes looks out through the window of his room to see activities of the failed Warsaw Ghetto Uprising (1943) and the Warsaw Uprising (1944), both of which are cruelly crushed by the Nazi authorities.  Ultimately, it appears that the whole city of Warsaw is destroyed.  And always the savagery of the German military is on full display.

Over the course of these years, the fugitive Wladyslaw has great difficulty finding any food in the abandoned buildings that he finds to hide in, and he is always on the brink of starvation.  So he becomes more and more emaciated.  It is said that the actor who played the part of Wladyslaw Szpilman, Adrien Brody, who was already slim, lost thirty pounds so that he could present a realistic emaciated physiognomy for this part of his role. 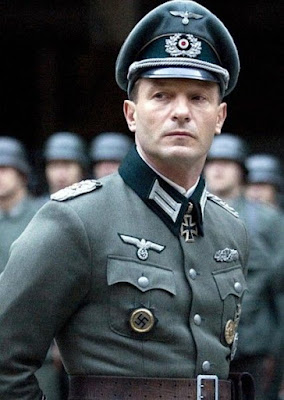 Eventually while trying to open a can of pickles he has found, Wladyslaw is finally discovered by a German military officer. Captain Wilm Hosenfeld (Thomas Kretschmann).  When Wladyslaw tells the man that he is a pianist, the skeptical Hosenfeld demands that Wladyslaw demonstrate his prowess on a piano located in the apartment they find themselves in.  So Wladyslaw plays a Chopin piece for him, and that stirs the sympathies in Capt. Hosenfeld, who agrees to hide Wladyslaw in the attic and secretly supply him food on a regular basis.  In 1945 with the German army now retreating, Hosenfeld comes to Wladyslaw before departing and gives him his army overcoat to keep warm.  (This German military attire would later cause problems for Wladyslaw when the allied forces arrive.)  Note that Wilm Hosenfeld is just about the only German in the film who is presented sympathetically as a humane person.

At the close of the film and with the war over, a formally-attired Wladyslaw is shown playing the piano with orchestral accompaniment at a posh recital hall.  For Wladyslaw, at least, life has regained its former beauty.

Altogether, The Pianist is a polished and fascinating work, with excellent production values featuring the cinematography of Pawel Edelman and the film editing of Hervé de Luze.  The music includes a number of melodious pieces written by famed Polish classical composer Frederic Chopin.  And director Roman Polanski has gone to great lengths to conjure up an atmospheric setting that evokes the ravages of a war-torn city of that time.  In addition the acting of protagonist Adrien Brody as Wladyslaw Szpilman is particularly notable, because, even though he doesn’t have a lot of spoken dialogue lines to speak, he conveys the increasing angst of a man constantly faced with life-threatening circumstances. 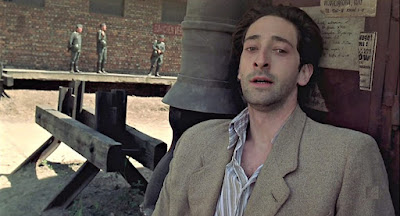 Nevertheless, and despite these undeniable virtues, I think The Pianist is not a great movie – it is a very good film, but not a great one.  The problem here is the absence of a compelling narrative structure to the events that are covered in the film.  For me the best films are those that portray the protagonist(s) engaged in some metaphorical “journey” for which they have some options concerning which “paths” they may choose to take.  I have remarked on this theme before, notably in connection with my review of Nomadland (2020) [9]:

“Almost all films (as well as dramas, stories, and novels) have a narrative that provides a structure for the events depicted.  The metastructure of these narratives is often characterized metaphorically as a journey.  There are one or more protagonists on such a ‘journey’ who are struggling to reach a desired ‘destination’, and there are usually other agents along the way who assist or stand in the way of progress.  Much has been written about the narrative-as-journey metaphor [10,11,12,13,14], notably the more formalized characterization of it known as the ‘hero’s journey’ [15] that was popularized by Joseph Campbell [16].” 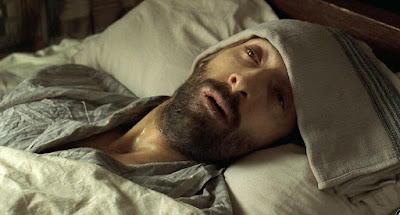 In the story of The Pianist, however, our protagonist, Wladyslaw, is relatively passive.  Things just happen to him, and he is never shown to be in any situations where he can exercise any agency, where he can choose one among several optional “paths” to take.  All we see is a perpetual victim who manages to survive one catastrophic life-threatening situation after another mainly by pure luck.  Wladyslaw’s adversaries are cruel and, at bottom, inscrutable.  They are like dark, unfathomable forces beyond his and our comprehension.  All Wladyslaw can do is helplessly react and try to hide.  This character of a darkened world with more or less unfathomable adversaries has been seen in other Polanski films (e.g. Rosemary’s Baby (1968) and Chinatown (1974)) and may be something of a pattern for him.

Of course, Polanski could have added some narrative elements to The Pianist that would have made Wladyslaw’s experiences more of an agency-oriented journey (if not a “hero’s journey”), but that would have compromised the historical authenticity of Wladyslaw’s tale.  What Polanski did do was insert a couple of narrative elements that were presumably intended to add some characterological depth to the Wladyslaw character. 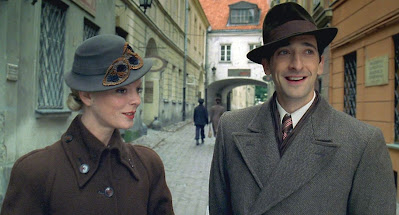 One concerned a couple of sequences involving some flirtatious encounters Wladyslaw had with an attractive young woman, Dorota (Emilia Fox).  But these encounters don’t lead anywhere.  Another inserted narrative element was Wladyslaw’s aforementioned encounters with the taciturn German Captain Wilm Hosenfeld.  But while these encounters with Hosenfeld were among the most interesting human interactions in the film, they represented an isolated occurrence and failed to give us a feeling for the earlier parts of Wladyslaw’s quest.  So the two narrative insertions did not fulfill my desire for narrative material that would flesh out Wladyslaw’s mental journey.

Nevertheless, The Pianist does feature a meaningful and heartfelt message that is a key to the film and must not be overlooked – it is one that is concerned with a fundamental aspect of human nature.  Despite the vast differences that stretch across humanity with respect to language, education, abilities, customs, norms, and culture, there is something that we all share, and that is the capability to have a direct aesthetic experience in response to something we see or hear (or even taste) in the world.  An example might be something like seeing a beautiful flower or waterfall or hearing beautiful music.  These aesthetic experiences are immediate and intuitive, and they do not require cogitation or thinking about what is being experienced [17].  Thus they are universally available and open to everyone, regardless of one’s background.  This means that, despite their hugely discordant backgrounds, a Jewish musical artist like the pianist Wladyslaw Szpilman and a German Nazi military officer like Wilm Hosenfeld can share direct aesthetic experiences, such as the Chopin musical piece that Szpilman plays for Hosenfeld, experiences that offer opportunities for bonding and that can ultimately open the door to shared understanding. 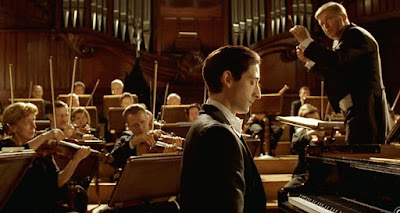 This was the message that Szpilman and Polanski offered to the viewer – that even amidst the most horrific atrocity-filled conflicts, shared aesthetic experiences can offer an opening toward salvation.
★★★½