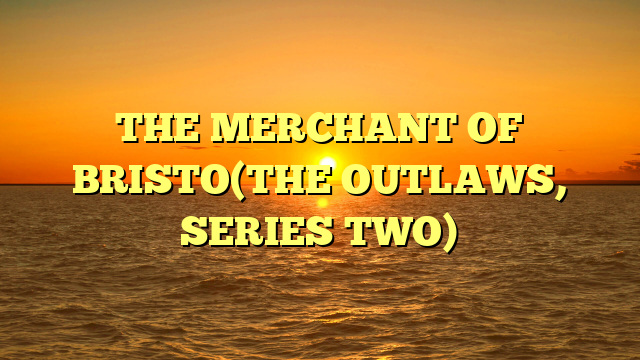 Whether it is ‘Breaking Bad,’ ‘Better Call Saul‘ or ‘Your Honor,’ it seems some of us can’t get enough of dramas about people who should be law abiding citizens engaging in dodgy criminal behaviour.

If done well, the audience goes along with these anti-heroes and their questionable antics as the story turns into a very bumpy ride.

But if we are to buy into these characters, we have to be convinced that they are capable of even the most outrageous criminal behaviour.

Series one of Stephen Merchant’s BBC1 and Amazon Prime comedy drama ‘The Outlaws’ surfaced last November, bringing together a disparate group of low level offenders in Bristol in a tale about drug gangs and dodgy money. 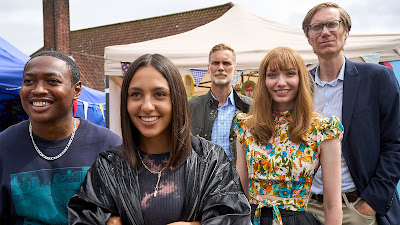 The group comprised of Merchant’s lonely, bumbling solicitor, Greg who got caught in his car with a prostitute, Christopher Walken’s seventysomething fraudster Frank who was fresh from a spell in prison for passing dodgy checks and Eleanor Tomlinson’s Lady Gabby, a social media influencer with a wild drug habit and an even wilder temper.

It also included Clare Perkins’ serial civil rights protester Myrna who was wrestling with her guilt over the death of a police officer, Darren Boyd’s right wing, middle aged white businessman John who had a conviction for speeding, Rhianne Barreto’s grade A student and shoplifter Rani and Gamba Cole’s Ben, a young man from a broken home who got into trouble while trying to look after his sister Aiyana Goodfellow’s Esme.

Thrown together in a community service program under the supervision of Jessica Gunning’s Diane who aspired to be a Community Police Officer, the gang was tasked with revitalising a derelict community centre.

But when Ben, trying to keep Esme away from a drugs gang, and Rani got involved with Charles Babaloa’s dealer Christian, it set in train a series of mishaps involving stolen drug money and a nasty London gangland figure, Claes Bang’s The Dean. 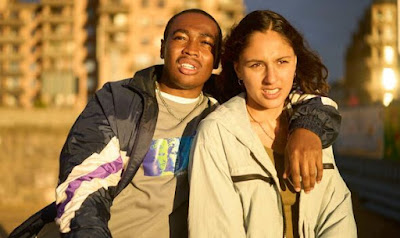 Ben is living with his sister in the family flat and is in a tentative relationship with Rani who he hopes to persuade to move with him to Weston-Super-Mare to open a beach side Carribbean food outlet.

Rani is still resisting her mum Nina Wadia’s Shanthi and her Polish dad, Gyuri Sarossy’s Jerzy’s pressure to apply for an Oxbridge university.

Lady Gabby continues to live the high life as a social media influencer, surrounded by hangers on. 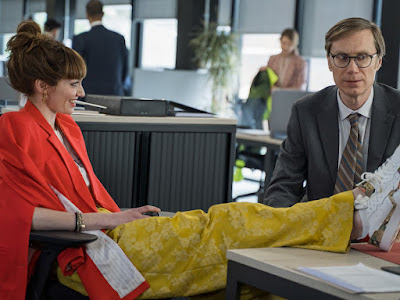 She fluffs an endorsement of a Sodastream machine because she is still taking copious amounts of cocaine and is prone to temper tantrums.

Greg remains in the law firm, where his obnoxious colleague Tom Hanson’s Spencer Fitzwilliam is in possession of material he can use to blackmail him.

He also gets tongue tied in the presence of a colleague he fancies, Amanda Drew’s Ruth.

Myrna’s Bristol Justice Collective campaign group is thriving but she has become wary of a colleague, Lois Chimimba’s Claire who she thinks is trying to usurp her. 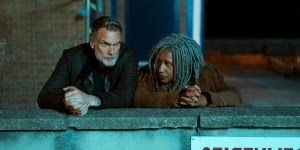 John is jolted when he is sacked from his family firm by his father, Ian McElhinney’s John Sr who insists it’s only a business decision and not personal.

He sees it is an opportunity for his son to pull himself up by his boot straps and make something of himself but John is stunned and struggles to find a new job while his marriage goes stale.

With his ex-wife in a nursing home, Frank has become increasingly ashamed of how he neglected her and his family in the past.

Now no longer restricted by an ankle tag, he wants to do right by his once estranged daughter, Dolly Wells’ Margaret and her two children, Guillermo Bedward’s Tom and Isla Gie’s Holly. 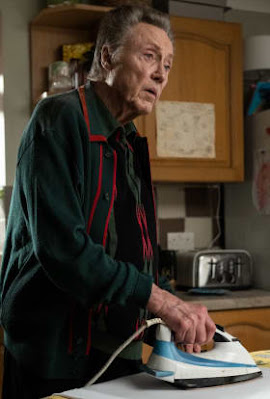 All of the group’s problems are overshadowed, however, when The Dean turns up in Bristol, determined to recover his missing money.

Grabbing Rani, Ben and his drug dealer Christian, he threatens to have them killed.

Even though some of her fellow offenders having spent some of his ill gotten cash, Rani brokers a deal with The Dean that they will pay him back with interest over eight weeks while laundering the money with the help of Greg.

With Christian due to go to jail and The Dean’s death threat hanging over them, she ropes in her fellow offenders – with the exception of Lady Gabby – and hits upon the idea of running Christian’s drug business for eight weeks to raise the cash they need. 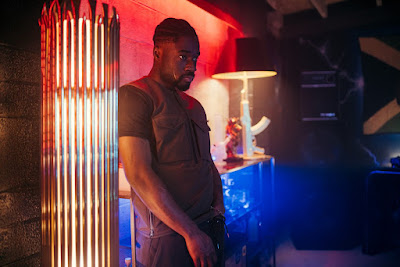 Targeting students, nightclub patrons and other potential clients by text, the group start to market the gear they sell as coffee, with Greg laundering the money they raise through Lady Gabby’s account and the Bristol Justice Collective.

Lady Gabby, meanwhile, is blissfully unaware of the threat from The Dean and what her fellow offenders are doing but is struggling to shake off her own addiction to drugs and alcohol and with the realisation that the hangers on are not true friends.

The police are also hovering.

Following intelligence received from an informant, Grace Calder’s Sergeant Haines and Kojo Kamara’s DS Selforth are both trying to work out who is running Christian’s drug business while he is in ja and how the operation is linked to The Dean. 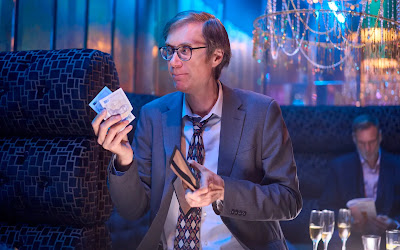 As they carry out their surveillance of drug dealers on council estates, they come close to exposing Rani and the gang’s links to Christian.

Will Sergeant Haines and DS Selforth be able to piece together the connections to Christian and The Dean?

Will Lady Gabby and the Bristol Justice Collective also twig how they are being used to launder the money the gang is raising?

Will the gang’s conscience about raising money through the sale of drugs get the better of them? 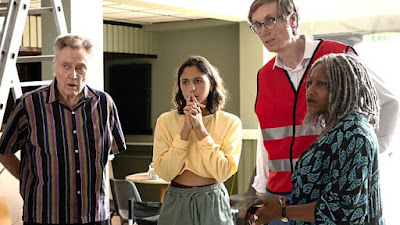 Will they fail and The Dean finally get to bare his teeth?

Series one of ‘The Outlaws’ was a mildly amusing show but it lacked big belly laughs or any dramatic heft.

The second series, unfortunately, suffers from the same problem.

Series two’s biggest weakness is that the gang’s conversion to successful drug dealers neither convinces nor is it dark enough. 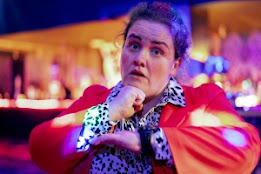 It’s so bubble wrapped, they might as well actually be running a coffee business that couriers lattes and mochas around Bristol than cocaine.

There’s no depth to the scripts by Merchant, Nathaniel Price, Nikita Lalwani, Claire Downes and Irish film and TV director John Butler nor is there any real sense of how conflicted the gang are.

Unlike ‘Breaking Bad,’ ‘Better Call Saul’ or ‘Your Honor,’ we never get to see the darkest consequences of the criminality they are engaged in.

When we do see a client availing of the gang’s text service, it is Greg’s buffoonish work colleague Spencer snorting lines of coke before he is robbed in his home. 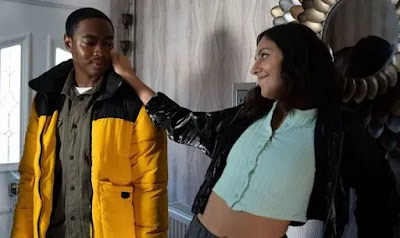 However there is a skittishness to how this incident is portrayed.

An attempt by Merchant and his writers to give Rani more of an edge by showing she has a natural flair and taste for running a drug operation doesn’t quite work – partly because of the casting.

Rhianne Barreto struggles to go dark and she isn’t helped by scripts that seem too afraid to go there, just in case it jars with Merchant’s need for gauche physical comedy and snappy one liners.

In the directors chair, Butler and Alicia MacDonald never manage to find the right tone for the show and the cast flounders. 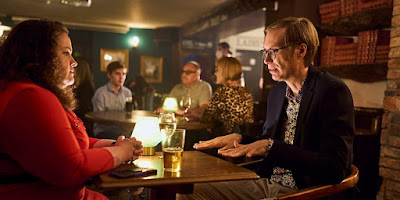 Merchant goofs around even during the more dramatic bits, as does Gunning who seems to have been given a brief to have the same sort of misplaced confidence he displayed in Ricky Gervais’ ‘Extras’.

Along with Barreto, Cole and Perkins also fail to strike the right balance between light and dark.

Tomlinson spends most of her time in the six episodes  moping about her addiction problems and her lack of real friends, while Boyd is saddled with a similar problem as John wallows in middle aged, privileged white guy self pity.

Walken’s colossal talent is wasted, as his old rogue role goes AWOL for a few episodes while Frank frets about his relationship with his family. 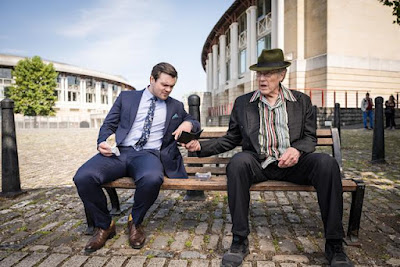 There’s also a bit of an over-reliance in trying to get Walken in scenes where he can dance.

Claes Bang turns in a stock performance as a London gangster and just goes through the motions – although you suspect he is being held back from bringing the worst traits of The Dean to the small screen.

Calder and Kamara are reduced to unsatisfying bumbling detective roles, while Wadia, Sarossy, McElhinney, Wells, Goodfellow, Hanson and Guillermo Bedward feel like they are just there to nudge the plot very slowly along – making even less of an impact than they did in the first series.

If there is a character, though, who best sums up the problem with ‘The Outlaws,’ it is Charles Babaloa’s Christian. 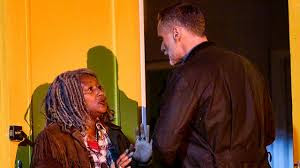 Thrown into prison for much of the second series, Merchant and his writers want to engage more sympathy for him – explaining how he became a drug dealer.

But they don’t give Babaloa the material he needs to properly explore whether Christian can reform.

Instead, all he is left with is a rather underwhelming role that only scratches an interesting surface.

If, as seems likely, ‘The Outlaws’ gets a third outing, it needs to be much braver and go much darker.

Merchant’s show needs to go beyond the surface and explore the complexity of its characters as well as the consequences of their actions instead of going for easy gags.