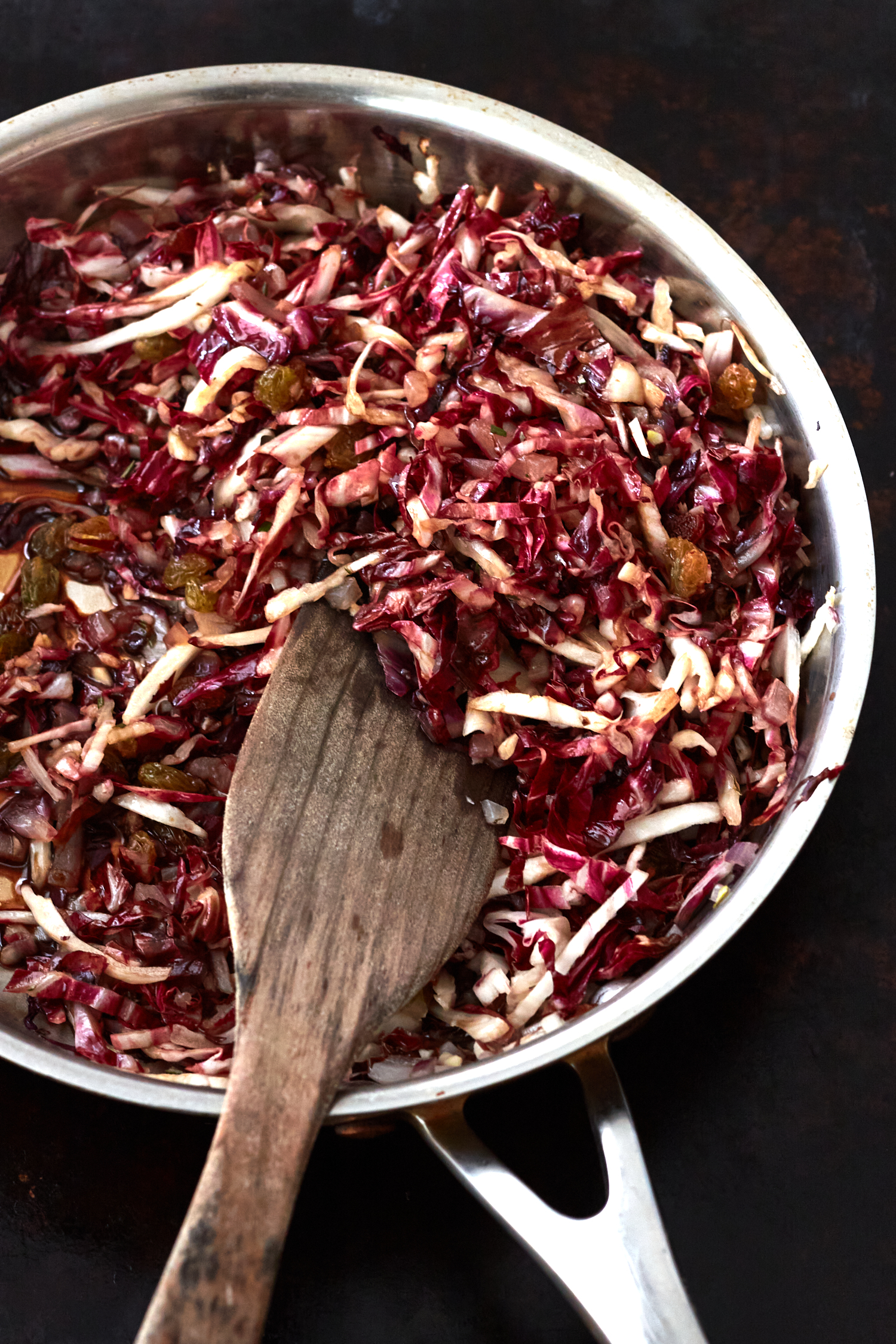 The other day a neighbor asked me how often I cook. I think he was curious to know if I cook everyday. I told him I cook most days, and most of the meals most days. While this might have kicked off visions of elaborate brunch buffets, or of me standing over simmering pots for hours on end, it usually means I’m doing something simple like reheating a leftover pot of soup for lunch. Or pouring some muesli from a jar into a bowl of yogurt before adding a kiss of something special. But that’s not how I ended up making this magnificent cabbage salad.

A few times a week I cook something completely new. Sometimes it’s my own idea, other times the recipe comes from elsewhere. That’s how we ended up here. I came across a Warm Red Cabbage Salad with Dried Fruit and Feta in the Complete Tassajara Cookbook I bought a few weeks back. I liked the idea of a warm winter salad – sweet and salty, rich with color, texture, and flavor and was excited to give it a try. 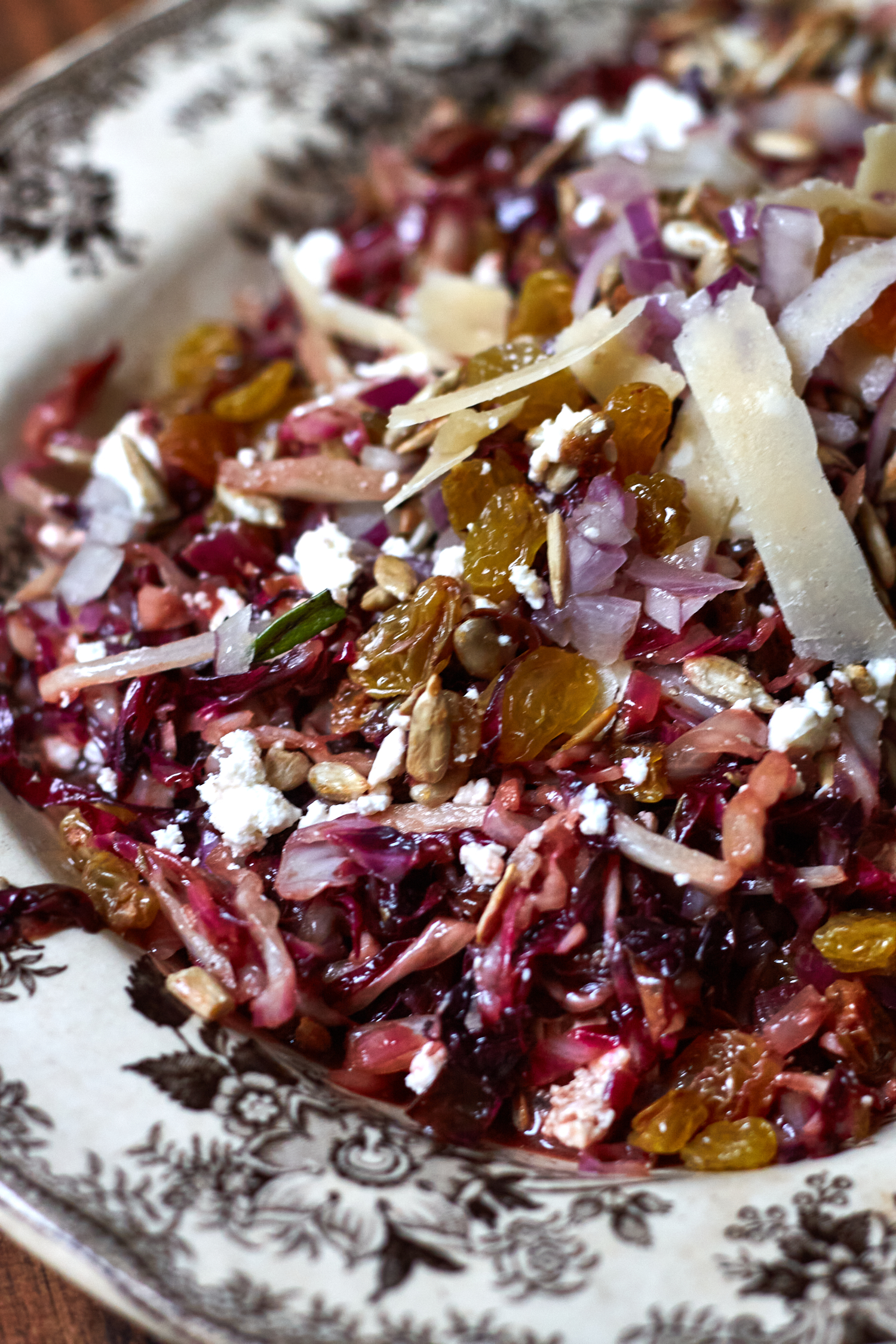 This salad is has a number of components. You start by making some sugar-crusted sunflower seeds for crunch. Beyond that, it’s basically a skillet saute with a short list of components that sing together – rosemary, garlic, vinegar cheese and dried fruit. It’s so good.

I used the Tassajara recipe as a jumping off point, tweaking it to my preferences. Cooking the cabbage uncovered, and for less time than the recipe called for, retains a bit of structure. I also used considerably smaller amounts of cheese and fruit and generally trusted my own instincts and tastes along the way. You can use my version of it as your own jumping off point, and then play around with it to suit your tastes as well. 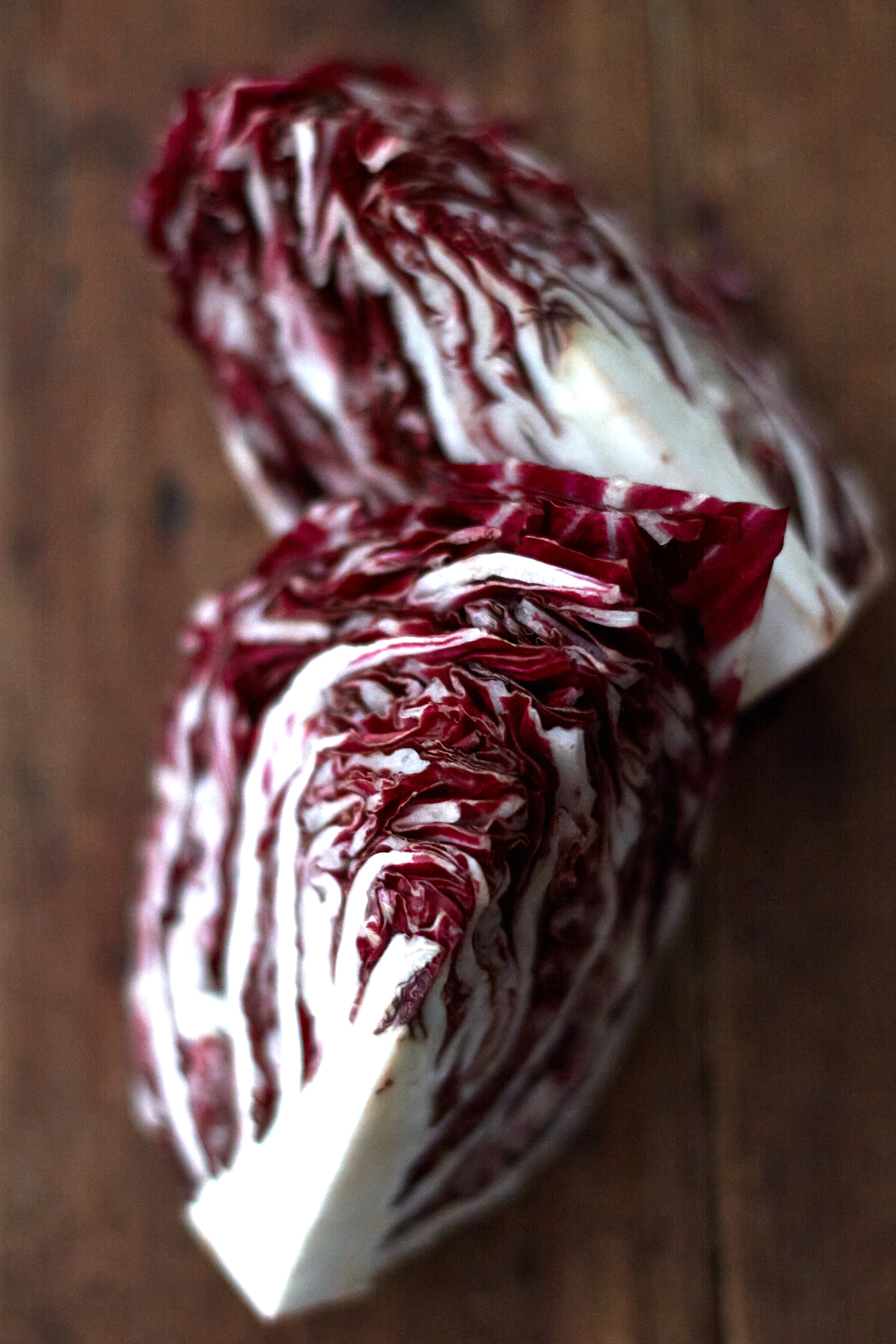 Some things I thought about along the way – I used golden raisins here, but I imagine any number of dried fruits would work nicely – dates, dried figs or persimmons. A few toasted walnuts or hazelnuts tossed in the pan at the last minute might be a welcome way to up the crunch factor. There can never be too much crunch. 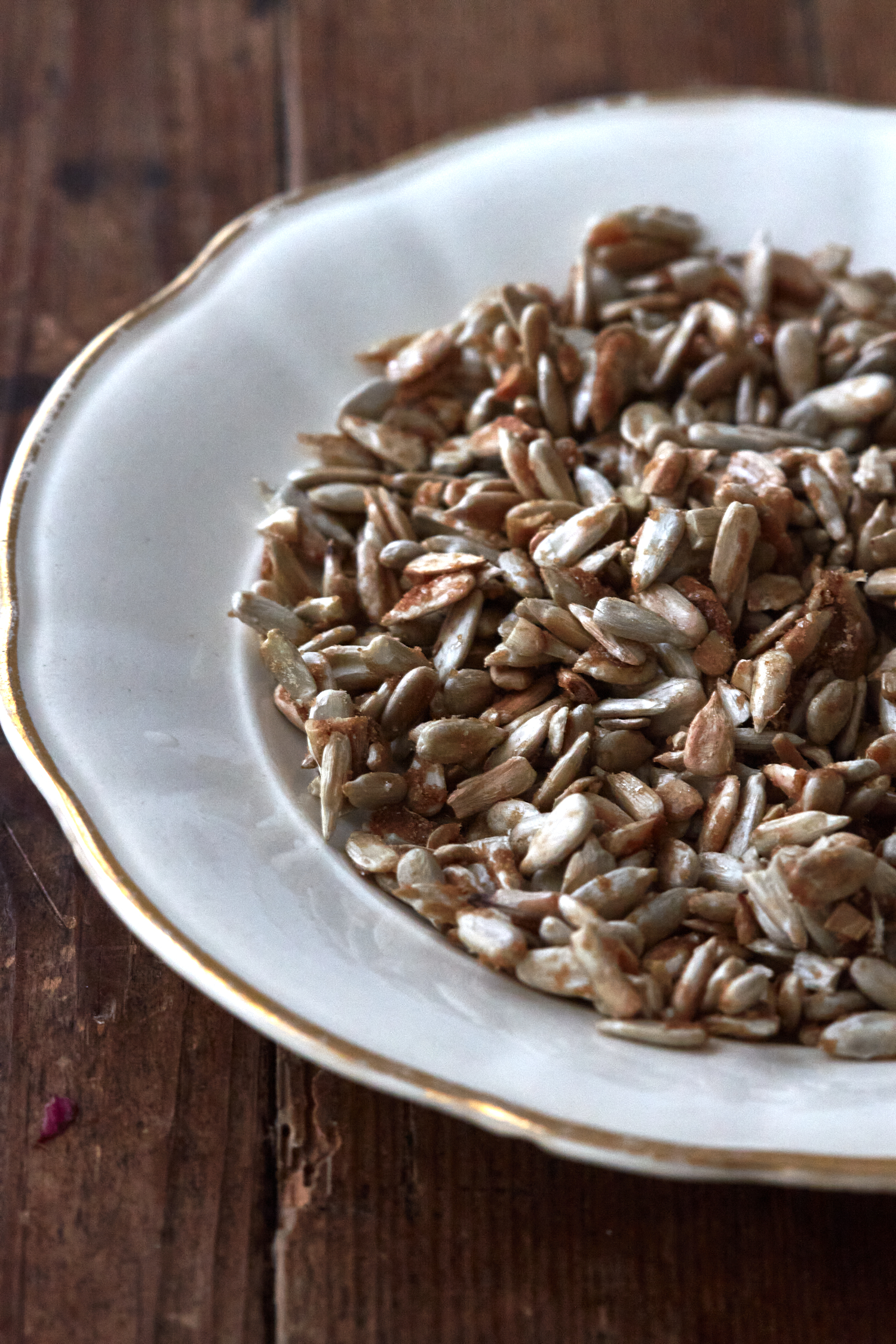 This salad is great as a stand-alone. It’s also perfect on top of a bowl of risotto or polenta. I’ve put a bit on a slice of hot nettle pizza before. And it’s nice as a filling for a piadine along with some extra cheese. You might think about using it as the finishing touch on a savory spinach tart or mix it into a quiche filling (after letting it cool). A recipe like this one can launch you in many different directions so have fun with it. There are a lot of ideas on the comments & some make a meal of it by adding a poached egg on top. Perfect. 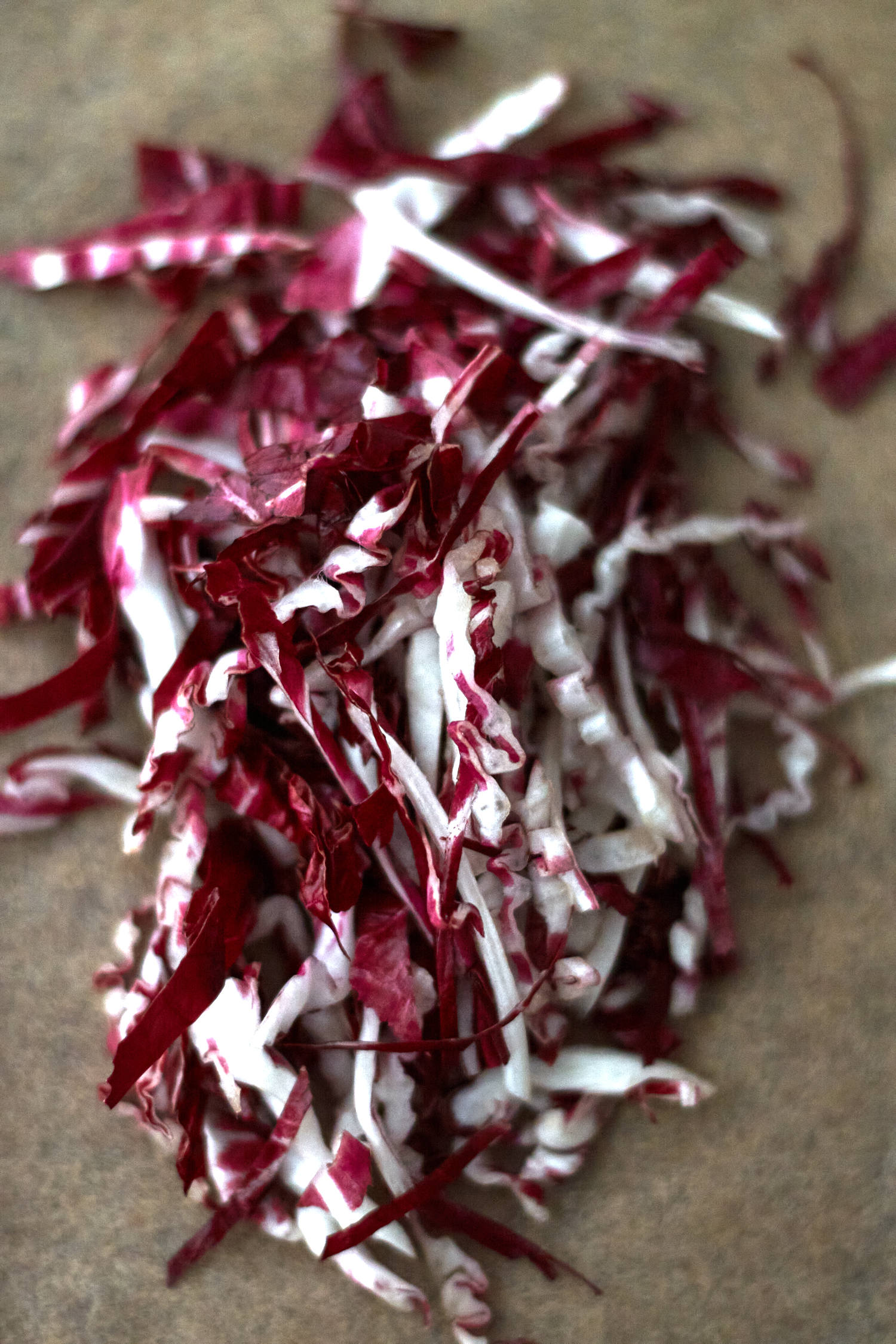 So, discovering recipes like this is part of the magic for me. When I think about how often I cook, I naturally think about why I rarely get tired of cooking. It’s because I find the task endlessly challenging and continually inspiring. A rhythm has emerged through it all – it goes something like this: old, new, me, you. Meaning – I cook an old favorite one night, next I might explore a technique or region that is entirely new to me, then maybe I’ll try out an idea of my own, and then a recipe I’ve learned about in a book, magazine, website, or from a friend – like this one.

And I have to say, it’s rhythm that works for me. Despite the hours I spend cooking, I still enjoy pulling my apron over my head, tying the knot behind my back, turning the knob on the stove and hearing the whoosh of the flame catch.

Cabbage is a forever favorite ingredient to cook with. It lasts longer than you’d believe in the refrigerator and plays nice with others. it’s equally at home in dumpling fillings, salads, slaws, soups and stir-fries. If you’re looking for more inspiration, browse the cabbage recipes and pay particular attention to these favorites: red pozole, spicy sesame coleslaw and vegan fish tacos.