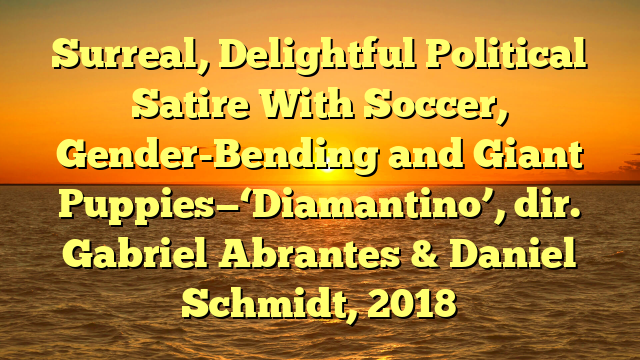 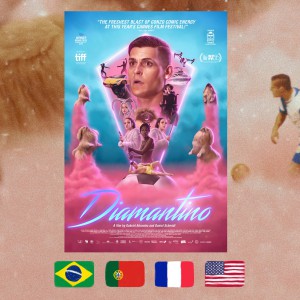 The end of a soccer legend’s career makes him an easy target for Portuguese nationalists, opportunism, and greed—but will his kind heart show him the way to love and truth? 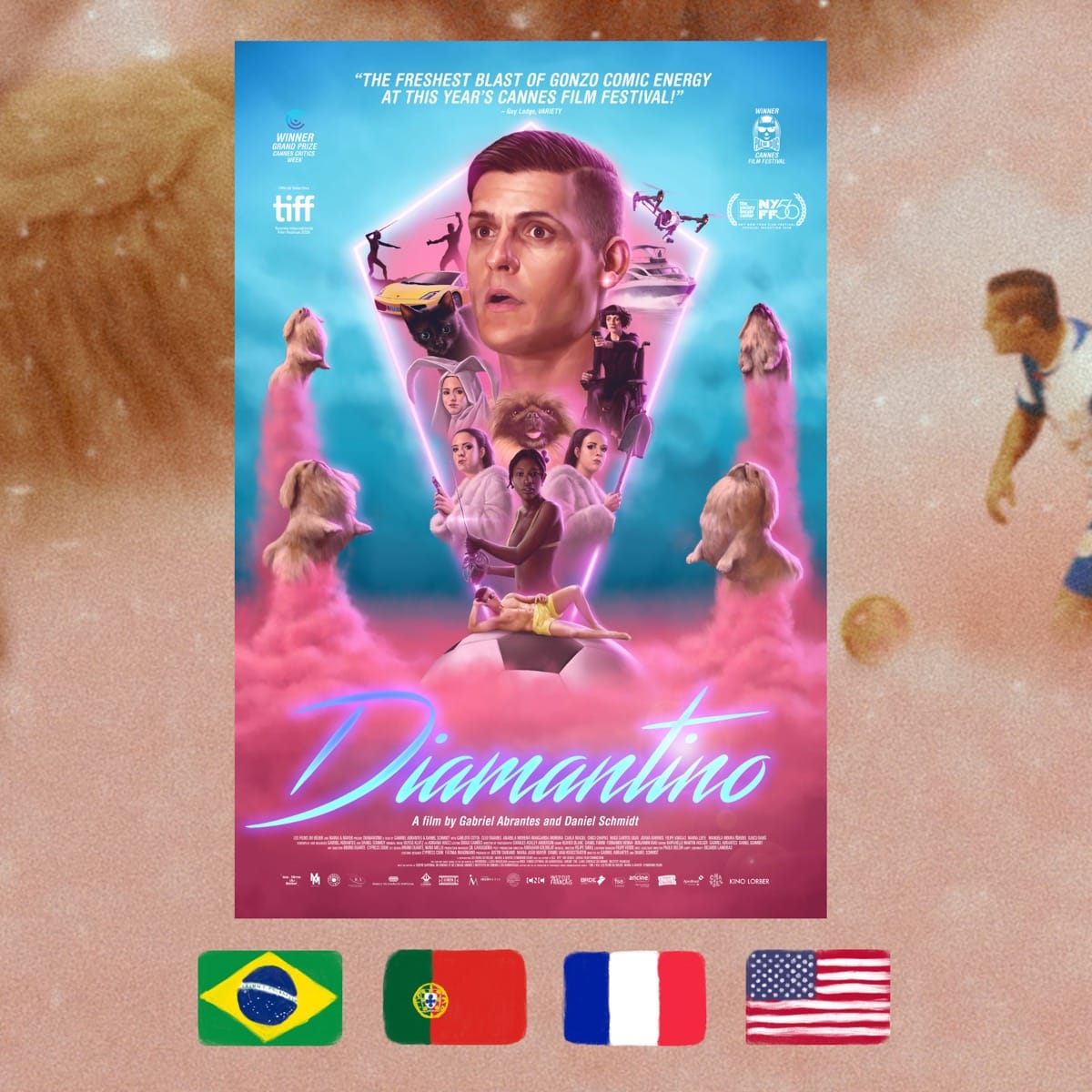 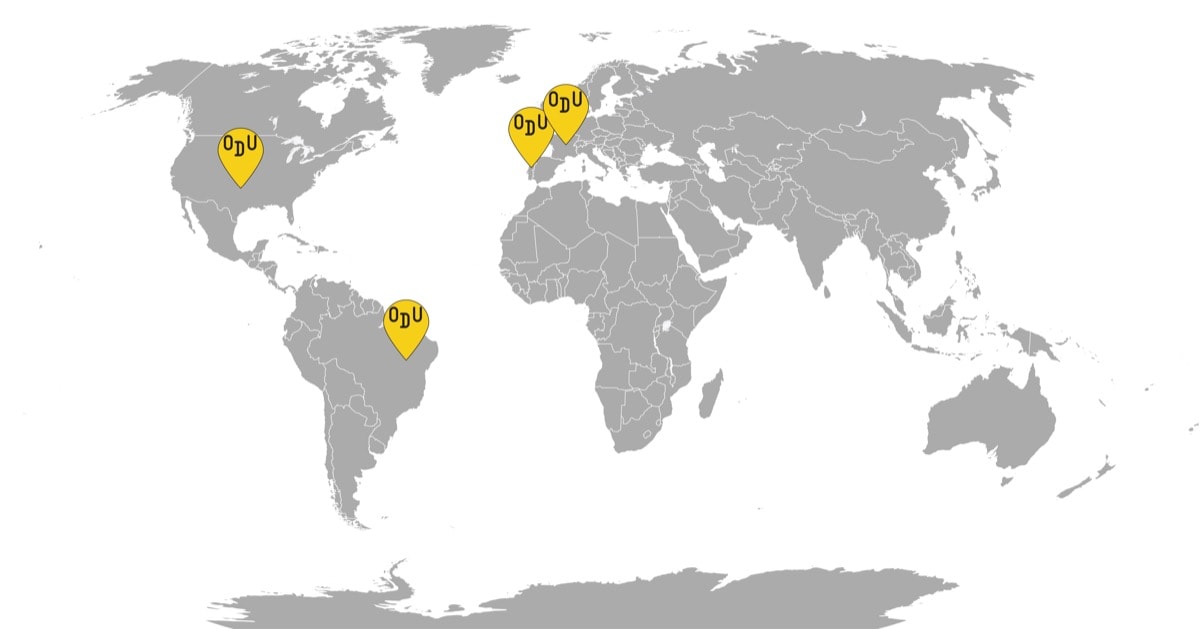 FROM PORTUGAL, FRANCE, BRAZIL and USA

WHAT IT’S ABOUT: Portuguese soccer superstar Diamantino seems to have it all. He’s rich, handsome, unmatched in his skills on the field—and has a kind heart, too. However, when Diamantino learns about the existence of refugees, the perfect little world which he inhabits starts to crumble. His poor performance at the World Cup makes Diamantino a disgrace. Affected by being the butt of all jokes and the loss of his beloved father, Diamantino decides to retire from soccer and vows to adopt a refugee child. However, this goes against the interests of his greedy twin-sisters, Sonia, and Natasha. They make a shady but lucrative deal behind Diamantino’s back, which will make the study of Diamantino’s genius possible but might cost him his life. When a female intelligence officer Aisha pretending to be a refugee boy Rahim infiltrates the family mansion to investigate Diamantino for money laundering, our hero seems to be surrounded from all sides. Will his kind heart and aspiration for true love save him from the danger?

WHO MADE IT: Portuguese Gabriel Abrantes and American Daniel Schmidt often collaborate, although they also work separately, and it’s their work as a pair that’s best known around the world. The 2010 short “A History of Mutual Respect” and the 2011 hour-long “Palaces of Pity” are their best-known, shrouding Portugal’s nationalist history in the kitschy contemporary subject matter. “Diamantino,” which the two co-wrote and co-directed, is their biggest project to date, which has brought the duo an array of awards, including the Critics’ Week Grand Prize at Cannes, as well as the Palm Dog for the fluffy puppies helping Diamantino to score. Since the release, Abrantes, the more prodigious of the two, has also released a short film, “The Marvelous Misadventures of the Stone Lady,” about an exhibit from the Louvres discovering the injustices of contemporary life.

Abrantes and Schmidt also did the film’s editing alongside the French editor Raphaëlle Martin-Holger, who also worked on “Made In Bangladesh.”

Carloto Cotta, who appears as Diamantino, is recognizably based on Cristiano Ronaldo, his masculinity as if dipped in candy and interestingly challenging the gender norms towards the film’s second half. Cotta had previously starred in Abrantes’s collaboration with Ben Rivers, “The Hunchback,” in a less handsome iteration.

Young actor of Cape Verdean ancestry Cleo Tavares plays Aisha/Rahim, able to pull off chemistry with Cotta both as Diamantino’s son and female lover. Twin sisters Anabela and Margarida Moreira, who have their two separate thriving film careers, provide some fascinating physical comedy as fairy tale evil sisters. Writer and actor Joana Barrios, who starred in Abrantes’s interpretation of Brancusi, “A Brief History of Princess X,” appears as the paraplegic minister, and Manuela Moura Guedes, a TV presenter and singer, makes an appearance as a TV host.

WHY DO WE CARE: The soccer industry, like many other industries that deal with raw talent coming from very young people, is famous for exploiting the gifts of its brightest stars while they’re ripe for the plucking but not providing them with the tools to lead a functional life afterward. The recent passing of Diego Maradona, an extremely talented individual who came to prominence and wealth from a humble childhood in a shantytown, is one of the most prominent examples of that. Never losing sight of his working-class roots, Maradona had evolved politics, and yet, a tumultuous history of substance abuse, violence, and many subsequent health issues.

“Diamantino” offers a very interesting interpretation of this theme. For the Portuguese right-wingers and his sisters alike, Diamantino is not a human being, but a source of unmatched talent and capital, financial and political, that can be exploited to advantage. Sonya and Natasha need him to become filthy rich; the government needs the country’s biggest star to be a poster boy for their white supremacist, neocolonial project. No one is interested in Diamantino’s agency or humanity.

His father, Chico, the only person in the family who really cared for Diamantino, it seems, was a man of humble beginnings and a religious background, who managed to bring his son up as an individual with a propensity for empathy but not always a language to express it. After the father’s demise, the pure-hearted Diamantino is left to figure out things for his own. However, his empathy doesn’t always work to his advantage because of his lack of ability to critically approach situations. This, in turn, does not get explored enough towards the end of the film, when some disturbing revelations of a personal nature are wrapped up neatly into a happy outcome. But what the film does show quite effectively is how goodwill is being weaponized for political gain and how breaking oneself free from this exploitation almost becomes a more difficult task than feeling empathy in the first place.

WHY YOU NEED TO WATCH: Bright campy allegories too often don’t have much “real meat” for someone who wants something other than aesthetic pleasure. Meanwhile, films centered around the world’s political issues tend to fail by being either too performatively woke or by sacrificing the entertainment for the sake of ideology. “Diamantino” is very successful in that it both tackles some vital topics but also allows the viewer to have some fun and derive pleasure from its stunning visuals and deliciously crafted scenes. John Waters himself would be proud of “Diamantino’s” marriage between vision and intent.

The refugee crisis, neoliberal nationalism, surveillance technologies, unethical medical experimentation, and the pursuit of singularity are all concerns of the plot concealed beneath the bubble gum fog of Diamantino’s existence, peeled away layer by layer as the plot thickens.

Throughout the film’s progression, Diamantino makes the way from innocence to experience. When we start, his world is simple, well-mapped territory, where victory means visions of giant fluffy puppies, and pleasure means crepes with Nutella and Bongo juice. When we get to the end, Diamantino is not the blissful but likable idiot he used to be—but he’s also not a useful idiot anymore, either. His path to experience, where refugees exist, people can hurt each other, and actions have consequences, is the most simplistic of a hero’s journeys that cinema had seen lately, and that’s why it works so well. Because beneath the harsh awakening of a soccer star lie the genuine complications that even way more nuanced, involved individuals never get to untangle throughout their intricately organized lives, even when they spend them engaged in philanthropy and charity or being “woke.”

The film’s central theme, of how society approaches genius in the capitalist framework, is an anti-thesis of traditional superhero narratives. In them, an ordinary person acquires a superpower through a mutation or something of the sort and with that breaks out of their middling mold, often losing the humanity in the process. For Diamantino, the journey begins from the heights of achievement, and the evil scientists and right-wing pundits alike want to get to the bottom of what happened earlier, which mutation caused it. However, the endpoint of Diamantino’s journey is something fundamental and human, where the extraordinary is sacrificed for the good. And that becomes a transgression more potent than anything else, as the film’s elaborate histrionics and gender-bending aesthetics wrap up in a sweet, soothing finale.

“Diamantino” is a subtle, yet loud, intelligent but also delightfully silly film that took a lot of talent to make, both from the brilliant duo of Abrantes and Schmidt and from the cast having a ball with the material. The film merges camp aesthetics and fantasy with real life concerns in a bright, approachable, and wildly entertaining way, becoming an effective image of our society in a nutshell. And even as it bites off quite a lot, it doesn’t try to do the unthinkable and offer solutions for everything under the sun. However, it solves the problems for Diamantino himself, and that’s satisfying enough.