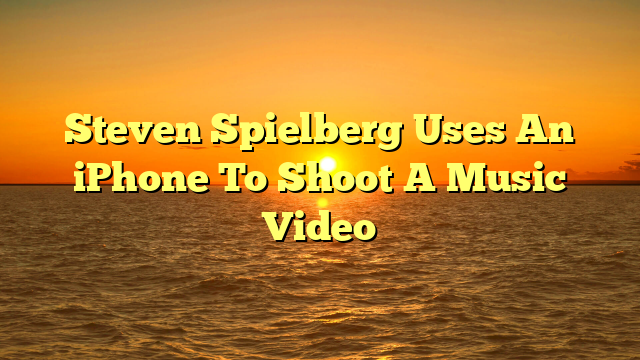 Yes that’s right, Steven Spielberg, the director behind over 33 movies including ​​Indiana Jones, Jurassic Park, ET, Schindler’s List and Jaws, has filmed a one-shot music video on his iPhone for Marcus Mumford.

Spielberg has been an influential filmmaker for more than fifty years – making his first movie called Duel in 1971. Earlier this month, he was shooting a music video for Mumford and decided to use his iPhone to shoot it. In doing this he follows quite a few other filmmakers who’ve use iPhones for various shoots including Steven Soderbergh, Michel Gondry and Zack Snyder.

The music video Spielberg shot is for Marcus Mumford’s single – Cannibal. It’s not the first music video shot using an iPhone. The video for Lady Gaga’s song – Stupid Love – was shot on an iPhone 11 Pro back in 2020.

Mumford wrote about the shoot in a tweet, saying: “On Sunday 3rd July in a high school gym in New York, Steven Spielberg directed his first music video, in one shot, on his phone. Kate Capshaw was the almighty dolly grip.”

As you can see from the video above, the result is a 4-minute black-and-white video of Mumford singing in a high school gym, all filmed in one shot. In the tweet Mumford posted, Spielberg can be seen in a rolling chair with his jeans rolled up, filming with his iPhone. So far, there’s no confirmation of which model iPhone it was so this is still anyone’s guess.

In Mumford’s tweet, Spielberg’s wife – Kate Capshaw – is shown behind Spielberg’s chair, rolling him around. When you watch the video, you can see why she was doing this and it delivers an impressive effect.

For more from Women Love Tech about iPhones, visit here.