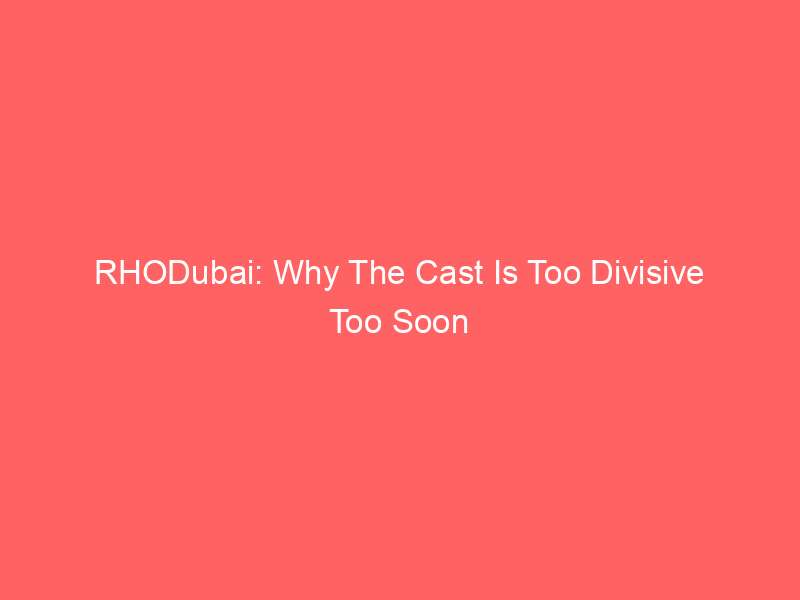 Fans are excited about the RHODubai franchise, but so far there has been mostly fighting among the cast. Fans want to see the housewives have fun.

Bravo fans were excited when the network announced The Real Housewives of Dubai would be joining the franchise, but now that the show is well underway, the cast’s divisive drama is becoming hard to watch. RHODubai promised to be an exciting mix of wealthy ex-pats living among Emiratis. Fans were particularly delighted to learn that former Ladies of London star Caroline Stanbury would be joining the cast.

As RHODubai debuted, it was hard to keep track of the housewives’ alliances. Caroline Brooks seemed to be tight with Lesa Milan and Nina Ali, but recent drama has Brooks and Lesa feuding. Brooks also got her feathers ruffled when Sara Al Madani tried to give parenting advice, which caused the single mother to see red. Stanbury and Chanel Ayan started out on the wrong foot and just when RHODubai fans thought they would become friends, things went left when Chanel and Stanbury started throwing shade at each other again.

While The Real Housewives fans like watching the shows for the drama, they also enjoy watching genuine friendships between the cast members. However, hardly anyone seems to like each other and there have only been squabbles between the ladies during what were supposed to be fun events. When Nina invited the housewives to her husband’s business partner Bijan’s birthday party, Stanbury became cross when her husband Sergio Carrallo started talking to Lesa. She then told Sergio that Lesa could suck his d***, which stunned the other cast members. Following the incident, Lesa tried to have a fun day skiing with the other housewives, but Stanbury refused to change out of her ski clothes and participate.

Just recently, Brooks told Page Six that Chanel has a “brain capacity of a 5 year old.” In the same interview, Stanbury accused Lesa of trying to cause problems between the two Carolines’ friendship. So far, the RHODubai cast seems to have a couple of strong friendships, with the rest of the housewives at odds with each other. With such a divisive cast, fans are already getting tired of the constant bickering. Viewers also love watching housewives have fun and let loose during cast trips. However, an RHODubai cast vacation sounds like a lot of fighting and very little fun.

RHODubai fans were expecting to see the glamorous castmates living it up in an exotic location. However, with so many feuds going on, the show feels more about the housewives one-upping each other. Stanbury’s dazzling engagement party in the desert was marred by Chanel arriving in a white ensemble meant to outshine her nemesis. When Stanbury accused Chanel of looking like a bride, the model later snarkily told the cameras that the Londonite was “underdressed.” The constant backstabbing on the show is getting tiresome, and fans are ready for some fun on The Real Housewives of Dubai.

Next: RHODubai: Why Nina Ali Was The Perfect Housewife To Cast


Jessica Choi is a senior writer for Screen Rant’s Reality Television department and has been part of the team since November 2021. As an avid watcher of reality television, SR gives Jessica a creative outlet to write about all things related to The Challenge and The Real Housewives. The Below Deck franchise, Summer House, and Vanderpump Rules are also among Jessica’s favorites shows to watch and she recently had the pleasure of interviewing a few of the Southern Charm cast members.

A former New Yorker, Jessica is now based in its neighboring state, New Jersey. She is a graduate of Queens College and has a BA in English and Elementary Education. As a self-described word nerd, Jessica’s favorite board games are Scrabble and Scattegories – however, don’t ask her to play Monopoly. When she’s not catching up on the latest reality television drama, Jessica can be found creating new designs for her Etsy shop or reading dystopian novels.

The post RHODubai: Why The Cast Is Too Divisive Too Soon appeared first on WorldNewsEra.