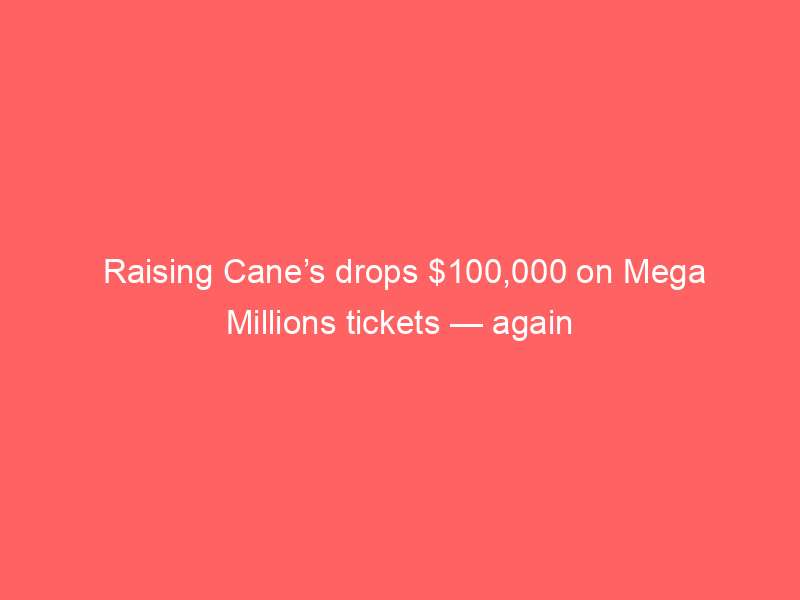 Though the probability of hitting the Mega Millions jackpot is notoriously lousy, the chief executives of Raising Cane’s are hedging their bets after buying lottery tickets for all 50,000 of their fast-food employees — for the second time in a week.

The company’s widely publicized first attempt at a win cost about $100,000 but wasn’t a success; no winners were announced Tuesday. But now that the prize has reached $1.1 billion — the second-largest in Mega Millions history — the leaders of the restaurant chain known for its chicken fingers have dropped an extra $100,000 for a fresh round of tickets ahead of Friday night’s drawing.

“Our crew members were so stoked the last time,” co-CEO AJ Kumaran told The Washington Post. “So we decided to try our luck again. And now we’re all just excited, waiting and crossing our fingers for a win.”

The jackpot has a cash-payout option of $648.2 million. If a ticket purchased by Raising Cane’s is a winner, the CEOs would split the sum evenly among their employees, meaning workers would receive nearly $13,000 each — a welcomed extra bit of cash amid the uncertainty of a shifting labor market, inflation and fears of a recession.

“Look, I hear from our crew members all the time, and things are really tough out there,” Kumaran said. “Whether they’re pumping gas or buying groceries, they’re feeling it and it’s hard. So this was an opportunity to have fun but at the same time, hopefully make a little bit of extra money for our people.”

Yet some have questioned the executives’ decision to throw more money at a game with minuscule chances of winning.

“You spent $100,000 on tickets and you lost, and you’re going to do it again? Why not give the money, give $200,000 to your employees?” CNN’s John Berman asked Kumaran during an interview Wednesday.

A quiz about your lousy chances of winning Mega Millions

Kumaran responded that buying the lottery tickets was “really more than about money.” The decision to divvy up the potential winnings reflects “taking care of each other [and] standing by each other as a family,” he said.

He told The Post that the idea of buying the lotto tickets really came down to “doing the right thing” for employees — and having a bit of fun at it.

“I don’t think of it as $100,000. It’s really $2 per crew member,” he said. “And if you think about it that way, it’s just a couple of bucks. They work very hard every day, and we’re doing this for them to have fun and test their luck. So I feel good about doing it.”

Kumaran also pointed to the $200 million in raises the company has paid its employees over the past two years. Raising Cane’s announced last year it would increase wages by about 15 percent for most employees.

The lottery idea started last Thursday, when Mega Millions announced its jackpot had swelled to one of the largest in the game’s history. That’s when Kumaran proposed having Raising Cane’s purchase the tickets. The company’s general counsel, however, was less than thrilled with the idea, he said.

Undeterred, Kumaran tapped his co-CEO and founder, Todd Graves, to finance the tickets out of his own pocket. “We thought, ‘Okay let’s do it as soon as possible because how hard can it be to print 50,000 tickets?’”

As it turns out, pretty difficult. Between getting a hold of the cash needed from four different banks and hitting up two 7-Eleven convenience stores in Dallas to print the tickets, the plan turned into a 10-hour operation on Monday.

He munched on a hot dog while the orange-and-white tickets were slowly printed. Twice, the machine had to be refilled — something that usually happens “every two months or so,” Kumaran said the gas station’s manager remarked. Meanwhile, other customers were complaining about the machine being taken hostage.

The hustle, however, was to no avail — though it did help Kumaran figure out a way to streamline the process for his next attempt on Wednesday. That day, instead of going around town with stacks of money, he was able to wire transfer the $100,000 to 7-Eleven. The eight-hour wait to print the tickets was still the same, nonetheless.

On Friday evening, a small crew of Raising Cane’s employees will scan all 50,000 tickets to see if any are able to break Mega Millions’ streak of 29 consecutive drawings without a winner — a long-awaited rollover that has inspired both “jackpot chasers” and serious gamblers to throw down their money.

Only four jackpots have been hit this year, with the last one — worth some $20 million — being won April 15 in Tennessee.

The odds of winning big Friday are roughly 1 in 303 million — the probabilities of having a toilet-related injury or being named a saint are significantly higher.