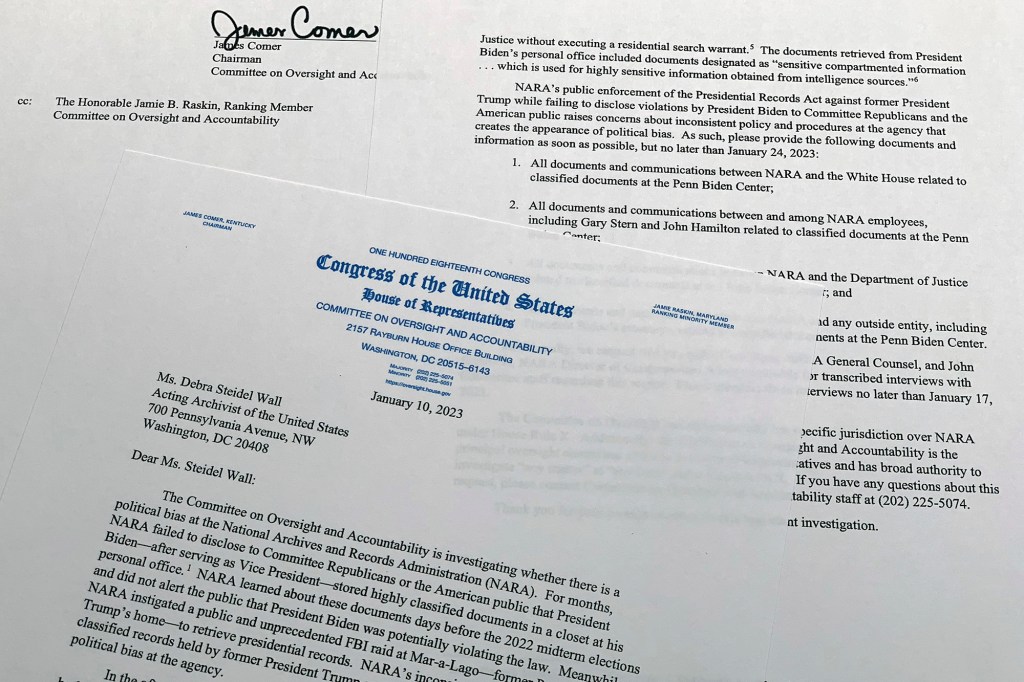 The Ivy League think tank where lawyers found classified materials linked to the Obama White House is a patronage mill for the Biden administration, raising suspicions among critics that its establishment attracted tens of millions in donations from anonymous Chinese donors.

The Department of Justice is currently probing how “a small number” of classified documents from President Biden’s years as vice president ended up at the Washington, DC, think tank that bears his name, the White House confirmed Monday. A second batch of papers were found at an additional location, it was reported Wednesday.

The University of Pennsylvania received more than $30 million from Chinese donors shortly after the Penn Biden Center for Diplomacy and Global Engagement, which functioned as an office for Joe Biden before he was elected president, was announced in 2017, according to public records.

“The Penn Biden Center is a dark money, revolving door nightmare where foreign competitors like China donated millions of dollars to the university so that they could have access to future high ranking officials,” said Tom Anderson, director of the Government Integrity Project at the Virginia-based National Legal and Policy Center.

The University of Pennsylvania raked in a total of $54.6 million from 2014 through June 2019 in donations from China, including $23.1 million in anonymous gifts starting in 2016, according to public records.

Most of the anonymous donations came after the university officially announced in February 2017 that it would create the academic center named for Biden, whose term as vice president under Barack Obama had just ended. In addition to leading the think tank, Biden was also named a professor at the school.

The Ivy League institution received $15.8 million in anonymous Chinese gifts in 2017 and one $14.5 million donation in May 2018 — three months after the center opened — records show.

“The Penn Biden Center has never solicited or received any gifts from any Chinese or other foreign entity,” said a spokesman for the University of Pennsylvania. “In fact, the University has never solicited any gifts for the Center. Since its inception in 2017 there have been three unsolicited gifts (from two donors) which combined total $1,100. Both donors are Americans. One hundred percent of the budget for the Penn Biden Center comes from university funds.”

The Center does not list any of its fellows or administrators on its web site, and does not have separate financial filings. It operates under the auspices of the University of Pennsylvania with a mission of engaging “fellow citizens in shaping this world, while ensuring the gains of global engagement are widely shared,” according to its website.

Meanwhile, former fellows and administrators of the Penn Biden Center now have key positions in the Biden administration.

Michael Carpenter, the former managing director of the Penn Biden Center, was named the US ambassador to the Organization for Security and Cooperation in Europe, based in Vienna, in 2021. Secretary of State Anthony Blinken also briefly served as director of the think tank before joining the Biden administration in January 2021. Before that, Blinken was a policy advisor for President Biden’s 2020 campaign.

Juan Sebastian Gonzalez, a senior fellow at the center from April 2018 to September 2020, is currently special assistant to the president and the National Security Director for the Western Hemisphere at the White House, according to his LinkedIn page.

The sensitive material at the center was discovered by Biden’s personal lawyers on Nov. 2, 2022, while they “were packing files housed in a locked closet to prepare to vacate office space,” according to a statement from Richard Sauber, special counsel to the president.

After Joe Biden was elected president in 2020, the center said it would operate “completely independent of the Biden administration.”

Other Ivy League colleges have raked in Chinese money, including Harvard, which got $75 million during the 2014-2019 period, and Yale, which received $43.5 million, records show.

The Education Department opened investigations in 2020 into whether Harvard and Yale were meeting reporting requirements for foreign cash.

The post Penn Biden Center where classified papers were found is a ‘dark money nightmare’ appeared first on WorldNewsEra.