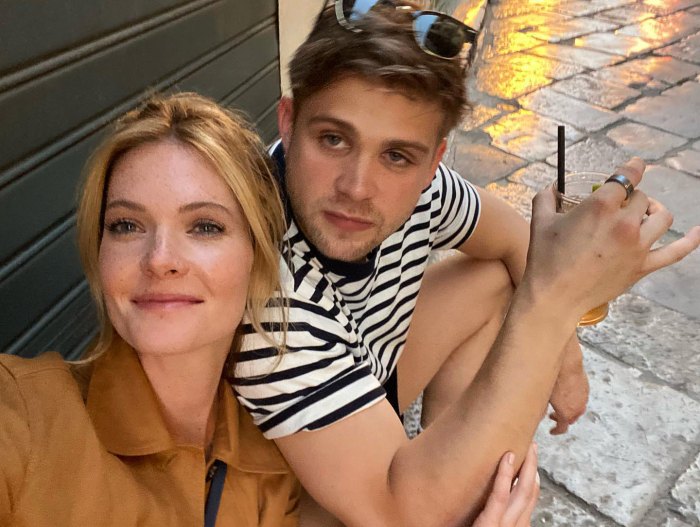 Finding love in Sicily? White Lotus stars Meghann Fahy and Leo Woodall have sparked romance rumors since season 2 of the HBO show premiered — but their recent social media activity has only added fuel to the fire.

“Sizzley Sicily,” Fahy, 32, wrote via Instagram on Monday, December 19, alongside a carousel of images from her time in Italy filming the hit series. While the Bold Type star highlighted most of the cast in her stills, Woodall, 26, made the most appearances — including in a sweet snap of the twosome.

In the selfie, Fahy can be seen smiling with her hands on the Cherry actor’s arm while he looks into the camera and sips on a cocktail. Other photos feature Woodall smoking a cigarette and laying on cobblestones to capture his own picture of the Lost Valentine star.

The England native, for his part, commented on the post with a bomb and a seashell emoji.

Fahy and Woodall starred as Daphne and Jack in season 2 of the White Lotus, which premiered in October. The anthology series, which was created by Mike White, is a sharp social satire that follows a group of wealthy resort guests who unleash their worst and most privileged impulses while on holiday.

Monday’s Instagram upload is just the latest in a series of flirty exchanges via social media between Woodall and Fahy. In September, the Vampire Academy actor shared a series of Polaroids alongside a caption that read, “That’s amore.” The first pic showed Woodall and Fahy seemingly getting cozy in a mirror selfie. The second snap, which was of multiple cast members together at dinner, featured the Nomad star with his finger in the Massachusetts native’s mouth.

“I love you! I love these! I love you!” Fahy commented on the post, to which Woodall replied, “Love you right back.”

Less than a month later, the Holby City alum shared a solo shot of himself via Instagram. “The sweatshirt also Leo for president,” Fahy commented at the time.

The pair made headlines again in November when Woodall uploaded a still of himself in character on the White Lotus set, to which Fahy commented, “There he IS.” When the Lost Valentine actress shared a video of herself singing “O, Holy Night” that same month, Woodall asked, “Can you do a Christmas album please cheers.” Fahy, for her part, responded to the request, saying, “Literally anything for you.”

Days later, she uploaded a series of snaps alongside a caption that read, “And thank you @elleuk I love the UK and I love all of the Elles!!!” Woodall, meanwhile, took to the comment section to let the Just Add Romance star know that “UK loves you back.”

During an interview with Variety in December, Fahy revealed that she and Woodall — along with costar Theo James — were the “life of the party” while on set.

Prior to her rumored romance with Woodall, Fay’s last public relationship was with actor Billy Magnussen. The pair started dating in 2017 but called it quits three years later.