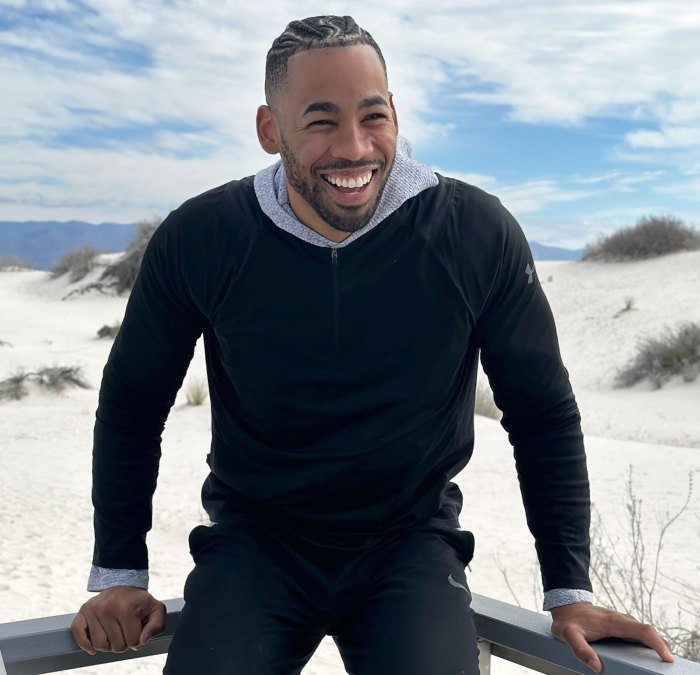 Off the market! Mike Johnson is happily dating a mystery woman after connecting through a mutual friend.

“Absolutely [I’m dating],” the Bachelorette alum, 34, revealed during an appearance on the Wednesday, December 21, episode of the “Click Bait” podcast after host Joe Amabile asked if Johnson had a girlfriend.

While Johnson refused to share his love’s identity, he offered a few tidbits about their early romance.

While their connection didn’t pan out, Johnson’s mystery lady still thought his friend was nice — before asking him to pass along her Instagram handle to share with the intimacy coach. “And then, I slid in the DMs,” the military veteran quipped.

Johnson and his partner have been exclusively dating for nearly two months after “talking” for six months.

“You guys are basically married! When are you going to tell us her name?” fellow podcast guest Gabby Windey, who split from fiancé Erich Schwer earlier this year, jokingly teased Johnson.

Johnson notably blushed after Windey, 31, and podcast cohost Natasha Parker teased him, and revealed that the new couple will “probably” celebrate his birthday and New Year’s Eve together.

The Texas native, who rose to fame as one of Hannah Brown’s Bachelorette suitors in season 15, was briefly linked to Meghan King in September when they were spotted enjoying a cozy night out at a Las Vegas strip club. The twosome then made their red carpet debut at the iHeartRadio music festival later that month.

“It was a blind date, but then it turned into a real date. So, then I get back to Saint Louis and I feel bad so I FaceTime him,” the Real Housewives of Orange County alum, 38, recalled during the October 4 episode of her “Intimate Knowledge” podcast. “I’m like, ‘Mike, I just wanted to tell you that I really enjoyed my weekend with you. I feel like it did start as this blind date, but I do have an honest connection with you and I am sorry if you ever felt emasculated. I have to reach out to tell you what I felt was real.’”

After Johnson and King’s nights out, the Bachelor Nation star eventually told her via text message that he wanted them to be “strictly friends” moving forward.

“I felt bad, like I was using him. Because I was. And he was fine and everyone is fine. So, I need to get over it,” the Missouri native — who shares three children with ex-husband Jim Edmonds — said on her podcast at the time.

The Making the Love You Want author has not further spoken out about his past connection with King, though he had been candid about finding love.

“You just got to throw yourself out there because if you don’t throw yourself out there, then you’re just going to be sitting in the house all day every day,” Johnson said during a May 2021 episode of his “Talking It Out” podcast, which wrapped earlier this year. “I don’t have none of these dating apps. I just have Instagram and on Instagram, it goes down in the DMs. … To the one percent [of people] I do respond to where I’m like, ‘Let’s see where it can go from here,’ I let it be known up front, ‘This is what it is. I will not blast your information. Don’t blast my information.’ That’s all I can do, though.”

The financial advisor has taken that mindset into his new relationship. “I’ve dated post-show and no one knew about it because I wouldn’t allow that question,” Johnson said on Wednesday. “It’s almost like ‘damned if you do, damned if you don’t.’ … I want to protect her [from social media comments], but at the same time, it’s definitely gonna happen, like, I’m happy.”

The post Off the Market! Bachelor Nation’s Mike Johnson Reveals He Has a New GF appeared first on WorldNewsEra.