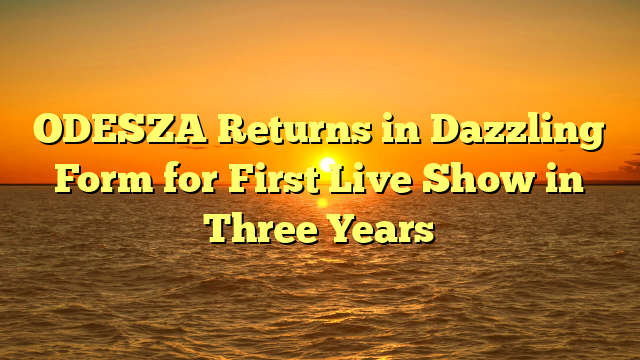 The duo, Harrison Mills and Clayton Knight, released their new LP, The Last Goodbye, on July 22, kicking off their tour a week later with a sold-out, three-night run at Climate Pledge that continues Saturday (July 30) and Sunday (July 31.) The tour will then extend across North America this summer with an amphitheater run. But with Friday night marking ODESZA’s return to live music, anticipation was extremely high, and Billboard was there to witness it.

At 5:30 p.m. on the hot and sunny Friday, fans adorned in ODESZA merch gathered around the edges of Climate Pledge Arena, the world’s first zero-carbon arena, in wild anticipation of ODESZA’s impending return. Venue doors opened at 6 p.m., with fans flowing in from all sides of the arena. Many immediately got in lines at the various merch booths and some ran to get food and drinks, while groups of friends reunited in the aisles. All together, the inside of the arena turned into an ODESZA-themed convention, with LED screens showing various animation renders done by the the duo’s Foreign Family Collective team setting the mood.

People began to find their seating around the arena, with the floor a little less than half-full at 7:20 p.m., when Foreign Family Collective signee Ford began his set with “Craving” from his 2018 album (The) Evening. It was an apt welcome to an amazing night of music and spectacle, with the artist warmly greeted the crowd, saying this was his first time performing in an arena and that he was excited he was to be opening for ODESZA for the next three nights. He played a remix of “Flashing Lights,” which got some heads bobbing, and then “Living, Breathing,” one of his faster-paced songs. He ended his set with “Bedford Falls,” a track laden with calm drum beats and lo-fi inspiration.

Sylvan Esso was next on the night’s lineup and began playing at exactly 8:11 p.m. Amelia Meath, the duo’s singer, carried the performance with her crisp, powerful vocals that sounded extremely pleasant blasting out of the arena speakers. Nick Sanborn, the duo’s producer, laid the foundation of dancey beats and modular sounding notes to cohesively bind with Meath’s vocal prowess. As the end of their set neared, fans began to return from food and drink runs, last-minute bathroom adventures and merch hauls to get to their spots for the main event.

Nearing their scheduled start time of 9:25 p.m., all seating areas of the arena quickly filled up, and the floor that was still relatively empty at break was now packed to the brim — but from the center toward the back of this area, there was still plenty of room to move and dance. (This writer was given a heads-up about being in the center for the first three songs, a pro tip that should be taken into consideration for other concertgoers.) Then all the lights went dark, with the crowd shouting ecstatically and fans who were sitting down standing up to join in the cheering.

Seconds after hitting 9:25 p.m., the stage slowly came to life. The ODESZA ​​icosahedron logo illuminated as “This Version of You” began playing. Fans were shouting and cheering, and chills were felt as Julianna Barwick’s meditative introduction from the song welcomed all into a positive mindset and deeper thought. Her voice on the arena speakers was calming, yet strong and confident. As the song built, you could feel the electricity in the air as people emotionally prepared themselves for an hour-and-a-half-long musical adventure.

The duo then played a new song, “Behind the Sun” — which sounds like classic ODESZA — with explosive pyrotechnics pairing beautifully with the song’s drop. The sample of Iranian artist Simin Gharem’s song “Sib” combined beautifully with the percussive and bass-heavy work, showing off their expertise in finding samples that work so well in their music. It wouldn’t be an ODESZA show without hearing coveted VIP versions of original tracks, which included “All We Need,” “Something About You” (mashed up with “Love Letter”), “Memories That You Call” and a surprising D’n’B VIP mix of “Falls” that worked incredibly well.

While the duo’s previous tours have nearly mythic status among fans, ODESZA’s visuals Friday night absolutely floored the crowd and certainly compared to, and in many instances topped, what they’ve done in previous shows, exploring different themes in vivid ways. Their visuals also took a darker turn, with frames of an android-looking figure clothed in gold running against a strong current and navigating through an apocalyptic wasteland, while “Keep Moving” from ODESZA side project Bronson played. There was also a demonic wolf trying to tear itself out of the screen, and during “Loyal,” a barrage of arrows hit the screen followed by a skeletal knight menacingly walking through a field.

There were a few crowd shout-outs as well, with Mills saying, “It’s so good to be back. We’re so glad to be playing in our hometown again.” The classic “Lemme see you one more time!” from Mills also got the audience shouting, dancing and forgetting struggles and tough times, even if temporarily. The fans were an important part of why the spectacle felt so big and all-encompassing. Everywhere you looked, there were smiles, people were in awe at the visuals and production and strangers acted like friends. (Special shout-out to the Foreign Family Collective Discord community members, as they offered helpful tips and awesome recommendations for folks visiting Seattle for the shows, and welcomed many new fans of ODESZA this weekend.)

The guys brought out singer Noami Wild for “Higher Ground” and “Better Now” (which originally featured MARO) and Charlie Houston for “Wide Awake.” Wild looked comfortable on stage, and it was in fact comforting to see her perform live again after her run on the A Moment Apart Tour. Keen listeners seemed to have caught on, but almost every new song they played Friday night was layered subtly with songs from past albums, marking this tour as a celebration of not only the new album, but the entire ODESZA catalog.

The ODESZA drumline, also back for this tour, deserves its own praise, as they are a wonderful act on their own. They were surgically precise with their movements and completely in sync with each other, and their presence dominated the arena whenever they performed a solo. The trumpet players stood on their raised platforms, creating a pleasant symmetry on either side of the duo, their sound echoing vibrantly throughout. After a short transition through faded lights, a drummer and bass guitarist took the stage for the encore, “The Last Goodbye.” It culminated in a flurry of magical confetti where fans grabbed at pieces of icosahedron-labeled paper as the on-screen visuals depicted the same figure from the opening segment touching and rippling the screen, which quickly dissipated into darkness.

Mills and Knight, alongside all the musicians and drumline, gave one final bow while a harmonic version of “Light of Day” played in the background.

The first night of a series of three sold-out shows at Climate Pledge Arena was a resounding success. While the direction of their music has definitely shifted, it blends the emotive and electronic nature of past albums with a deeply introspective look into the adventure ODESZA has taken from their 2012 debut, In Return, to today. After a decade of the group, Friday night proved that one thing remains true — ODESZA  is meant to be seen, and heard, live.