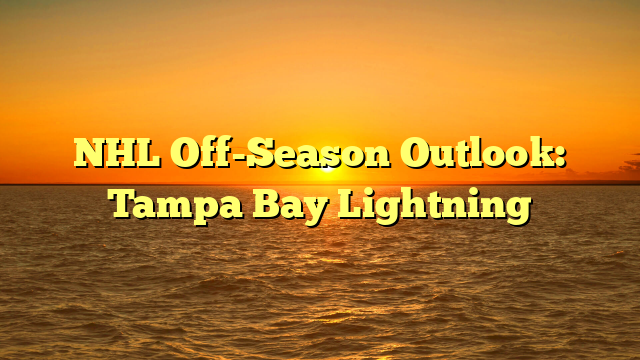 This is the newest file in THN.com’s series of analyses of each NHL team`s off-season moves. Today, we’re examining the Tampa Bay Lightning..

What Tampa Bay Has: As smart and talented a group of players as there is in the game; a world-class goaltender in Andrei Vasilevskiy; a perennial Norris Trophy frontrunner in Victor Hedman; arguably the best GM/head coach combination in Julien BriseBois and Jon Cooper; bona fide high-pressure producers in Nikita Kucherov, Steven Stamkos, Alex Killorn, Brayden Point; an injection of (relative) youth in forwards Brandon Hagel and Nick Paul;

What’s Realistic For Tampa Bay Next Season: There were doubters last season that the Lightning would once again be a Stanley Cup frontrunner, but the Bolts put those fears to rest with another incredibly resilient post-season run that only ended at the hands of the equally-skilled Colorado Avalanche. Once again, Tampa Bay’s impeccably-balanced lineup shook off playoff series deficits and otherwise excellent opponents en route to come within only two wins of their third consecutive Cup victory – a titanic achievement in any NHL era, but especially in the salary cap era. The system is constructed to constantly chip away at every successful franchise’s core, which makes it all the more incredible GM Julien BriseBois consistently found new faces – last year, it was forwards Corey Perry, Nick Paul and Brandon Hagel – who fit in seamlessly.

Yes, the Lightning have lost a few key veterans this summer – clutch winger Ondrej Palat signed as an unrestricted free agent with New Jersey, while veteran blueliner Ryan McDonagh was traded to Nashville – but is anyone really prepared to count them out this coming season? They shouldn’t be, when Tampa Bay has arguably the top goalie on the planet in Andrei Vasilevsky. He was their saving grace against Toronto in the first round, the key reason they steamrolled the mighty Florida Panthers in Round Two, and central to their Eastern Conference Final win over Igor Shesterkin and the New York Rangers. Some players earn more money than Vasilevskiy’s $9.5 million annual salary that you’d call overpaid – achoo, Sergei Bobrovsky, achoo – but Vasilevskiy is worth every penny and then some. And he’s still only 28 years old. So long as he’s on his game, the Bolts are a threat to win every game they play.

It’s going to be tougher for the Lightning to stay atop the NHL food chain going forward – next summer, KIllorn and Perry will be UFAs, and youngsters Cal Foote, Ross Colton and Philippe Myers will be restricted free agents, and BriseBois will have just $3.7 million in cap space to fill in his roster holes – but if any team in the sport has earned the benefit of the doubt they’ll remain in Cup contention, it’s Tampa Bay. They’re running out of top draft picks – they don’t have their first-round pick in either of the next two drafts, and also don’t have their second-rounder in 2023 – but that’s a future problem.

At the moment, all the Lightning want to do is win, and they’ve got more than enough skill and experience to get the job done yet again. You can bet against them, but you’ll do so at your own peril.