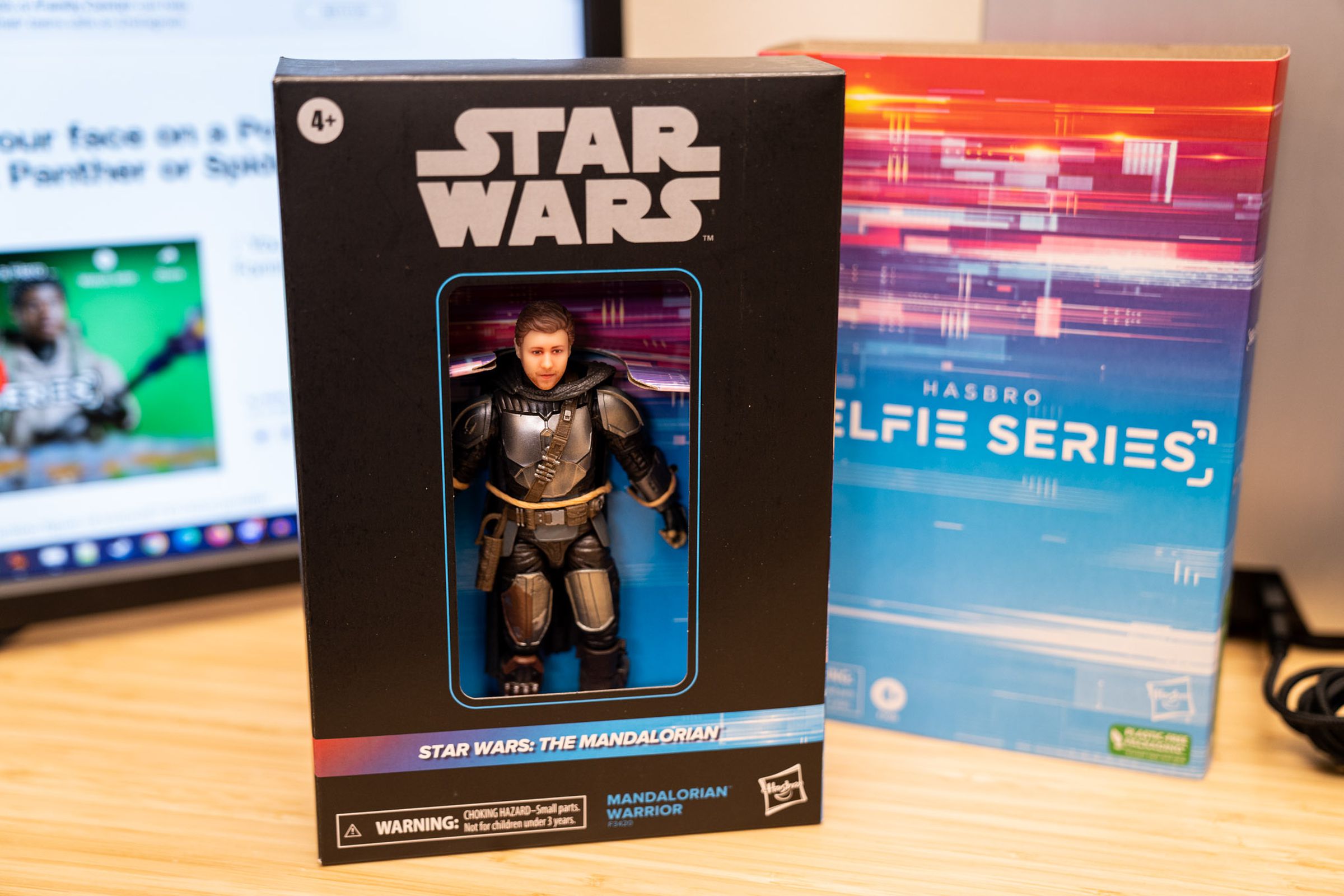 Remember when Hasbro announced it’d let you put your 3D-printed face on a fully licensed Star Wars, Marvel, Ghostbusters, G.I. Joe, or Power Rangers action figure for $60 plus tax? Well, my Hasbro Selfie Series figure just arrived this week — and while it’s not a perfect resemblance, I’m still kind of blown away. This might be the perfect last-minute gift for a fan for reasons I’ll soon explain.

But first, let me show you Mini Mandalorian Sean so you can judge for yourself.

While I really wish it came with the Mandalorian’s trademark helmet, the articulation and detailing here is definitely not bad for the price. You get his shiny Beskar armor, the Mudhorn signet, a stretchy shoulder belt and pistol pouch, lots of greebles poking through various parts of his ensemble, and enough joints to pose him almost any way you’d like.

In fact, I think his body is harvested directly from Hasbro’s Star Wars The Black Series figure lineup because the sculpt, blaster rifle, pistol, and jetpack accessories look identical to this one that retails for $20–30. In fact, I just so happen to have the earlier version of that figure, pre-Beskar armor, to compare with:

I just wish this one had a removable helmet to complete the ensemble — and so I could surprise people by revealing that the Mandalorian has always secretly been me.

Unfortunately, I don’t think just pulling off a helmet would clue people in! “That looks like you… a little bit,” says my wife. When I ask my three-year-old if it looks like someone she knows, she grins but can’t figure it out. (She’s been able to pick me out of a photograph for quite some time now.)

“From some angles it really does look like you,” says my colleague Mitchell Clark, who has only met me once in person. I agree, but I can’t tell if he’s damning with faint praise!

My wife and I agree that the biggest problem is the jaw. I simply don’t have an egg-shaped face with a pointy chin. I have a round face, and I’m proud of it. I was a little worried this might happen because the Hasbro app couldn’t seem to decide on my face shape. After a pretty rudimentary “scan” that basically just had me turn my head for a few selfies, it initially showed me the egg — but once I got to the 3D model, it seemed to have rounded out my face, and I assumed everything was okay:

But it still gives me a fun uncanny feeling, and I do like the way the head looks otherwise. I expected to see some telltale signs that it was 3D printed, but I can’t really make them out without a magnifying glass. Kudos to Hasbro’s 3D printing partner Formlabs for that.

One last annoyance: you have to choose the hair and beard style yourself, as they’re not part of the scan, and it’s difficult to get a good match. I couldn’t get the hair and beard the same color, which feels like a weird problem, and it’s surprisingly difficult to estimate how much facial hair your figure will end up with. See the Power Ranger below? I picked a very light beard, but it looks thick and bushy. With the Mandalorian, I tried to compensate by going even lighter — but the result is so much lighter than I was imagining.

Would I have been satisfied with my $70 purchase (after tax and shipping)? I’m on the fence, but I would have loved to receive it as a gift — and I’m happy to say Hasbro is making that part easy.

Instead of creepily trying to surprise them with a mini-me based on pics you upload without permission, you can leave it all in their hands come Christmas Day. You just buy a digital code, help your friend or family member download the app, let them decide whether they want to send scans of their face across the internet, and pick their own hero and hairstyle. Hasbro says you’ll get automatically refunded in 45 days if they don’t go through with it.

Here’s the full set of options as of today:

And in case you’re wondering about your giftee’s face data, we already asked about that: “The scan will be stored only for 60 days from ship date at which point it is deleted. It is not used by Hasbro in any way except for if a replacement needs to be issued within the 60-day window from ship date. The scan will not be used for advertising or marketing or sold to anyone,” spokesperson Meredith Chiricosta told us in July.

If you bought one of these figures, I’d be eager to see how closely it resembles you! And as a bonus for reading this far, I’ll leave you with some alternate reality Spider-Verse versions of me.

The post Need a last-minute gift? Hasbro made me into a Star Wars action figure appeared first on WorldNewsEra.