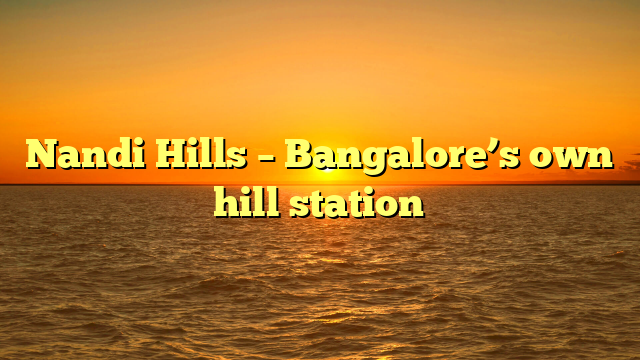 Nandi Hills, also known as Nandidurg or “Nandi Betta” is an ancient hill fortress situated in the Chikkabalapur district of Karnataka. Located near the town of Nandi, It is believed to be a place of origin for the Arkavathy River. Some breathtaking scenery, rare flora, cool fresh air and peace, make the hills the perfect place for a day holiday from Bangalore. The best time to enjoy the beauty of this scenic place is early mornings. Although you can visit the hills at any time of the year. The Nandi Hills are also a haven for adventure freaks. The mild ascent to the hilltop can be an exciting opportunity for cyclists to cherish a challenging ride to and around the hills.

Nandi Hills – Ascent to the top

Nandi hills are a picturesque region just outside the city limits of Bangalore. The surroundings are dotted with sloping green hills and miles of semi forest land inhabited by wildlife and migratory birds. Some of the common birds sighted are Asian Paradise Flycatchers, Bulbuls, Tawny Eagles, Blue Capped Rock Thrush and Puff Throated Babblers. Adventure & Fitness enthusiasts prefer the ascent on sports bikes or by trekking up the hill by the road. The hills are dotted with many temples and forts ideal for a weekend getaway from Bangalore. Watching the sunrise offers a glimpse of the mesmerizing beauty of Nandi hills and can be an exhilarating experience. 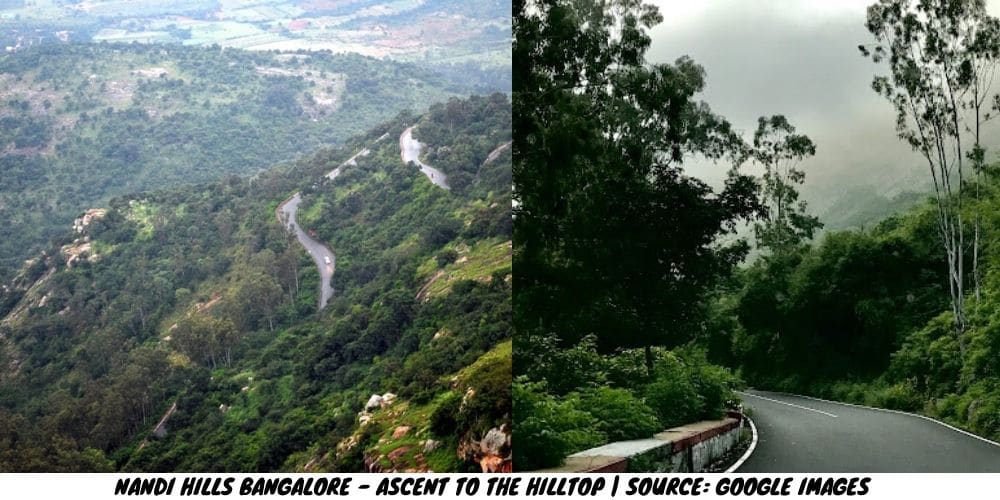 Visitors to Nandi hills are greeted with a wide arched entrance, part of an elaborate fort built atop the hill by Tipu Sultan.

A well-maintained garden atop the hill is an ideal place to spend quality time with family and friends. The elaborate gardens are enclosed within the walls of the Nandi Fort covering an area of 90 acres. Many migratory birds, monkeys and macaques visit the hills regularly. Visitors are requested to be careful with monkeys eager to get a quick bite of fruits or snacks. 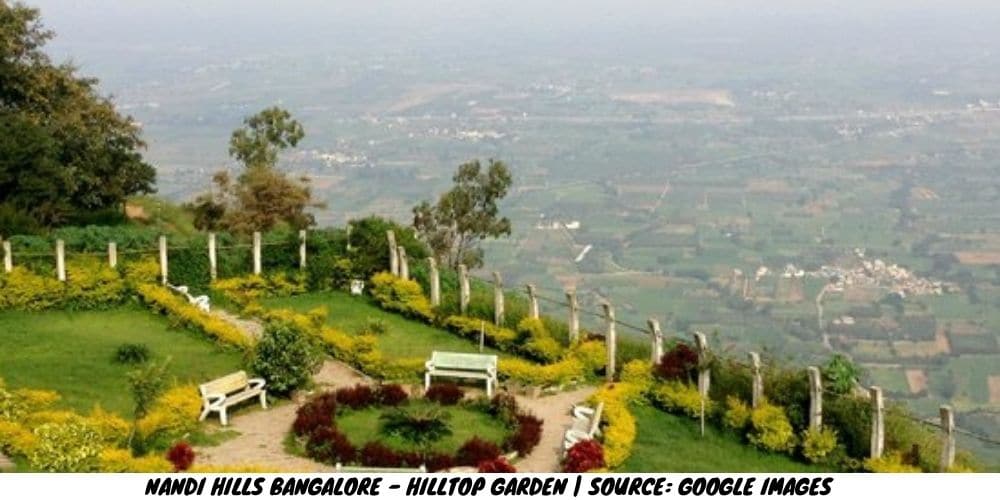 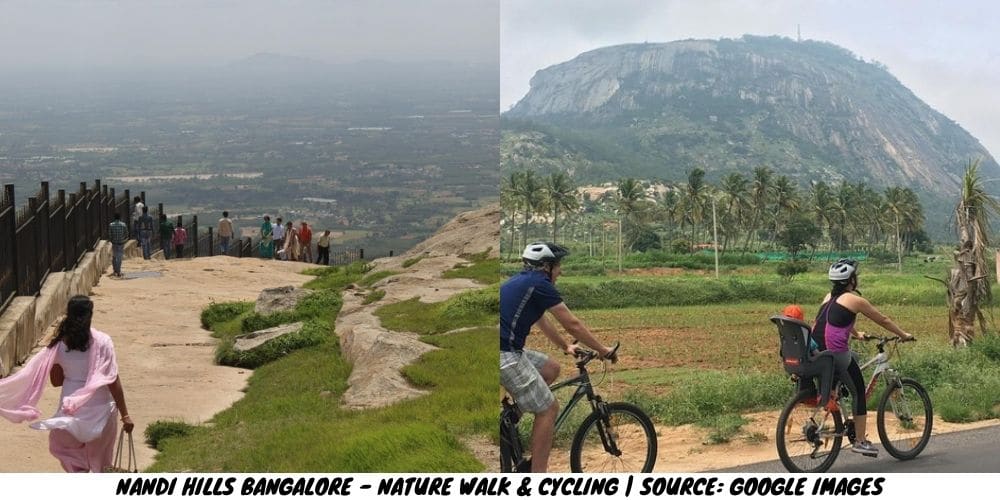 Top 10 tourist places in and near Nandi Hills

Devanahalli fort found along the Bangalore-Hyderabad National highway can be a first pitstop, if on a day tour to Nandi Hills. Devanahalli dates back to the 15th century when a group of refugees from Kanchipuram settled in the area. Chief among them was Malle Byre Gowda from the Morasu Wokkalu family, who settled in a village named Ahuti, now known as Avathi. 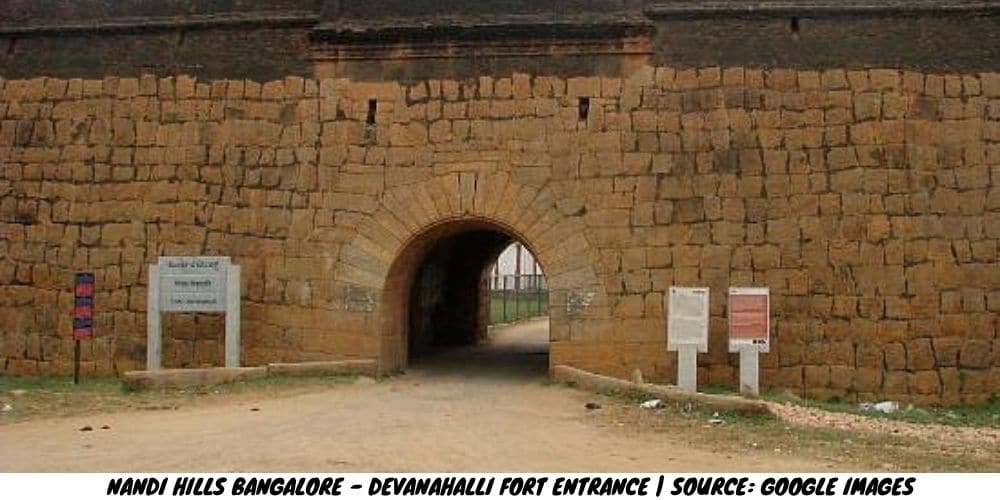 Devanahalli Fort was built by Chieftain Malle Byre Gowda, a mud fort then under the aegis of the Vijayanagara Empire. The Fort switched hands to Hyder Ali, who reconstructed it to an extensive monument in stone. A placard from the Archaeological Survey of India declares the fort to be a protected monument.  The small town is also the birthplace of Tipu Sultan, popularly known as the “Tiger of Mysore”. A small memorial is erected on the southwest side of the Devanahalli fort complex, stating that Tipu Sultan was born here in 1751. 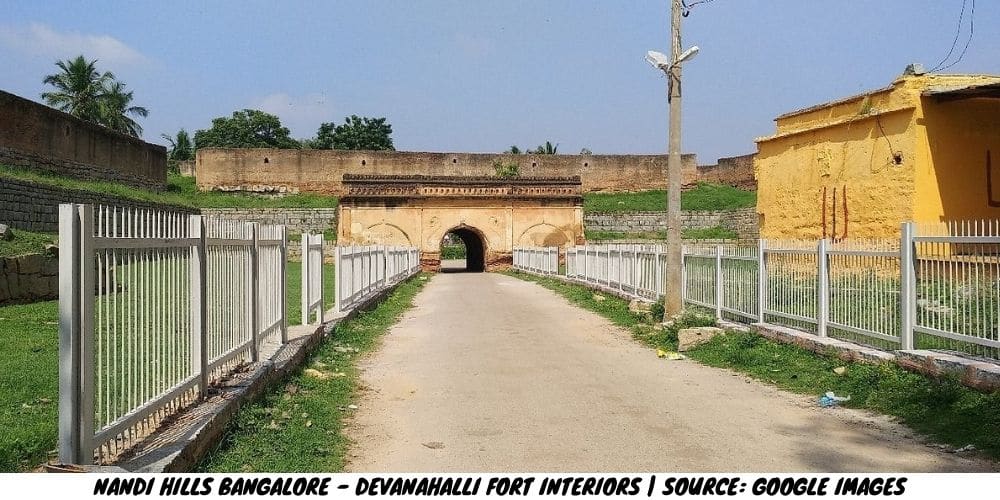 Devanahalli Fort was built over 20 acres, fortified by solid masonry and 12 semi-circular bastions situated at regular intervals. These bastions acted as gun points to protect the fort from enemy attacks.  The homes where Tipu & Hyder Ali lived are also preserved here. It is also home to the Venugopalaswamy temple which is decorated with beautiful statues. The sculptures and intricate carvings are exquisite comparable to the temples of Belur and Halebid. 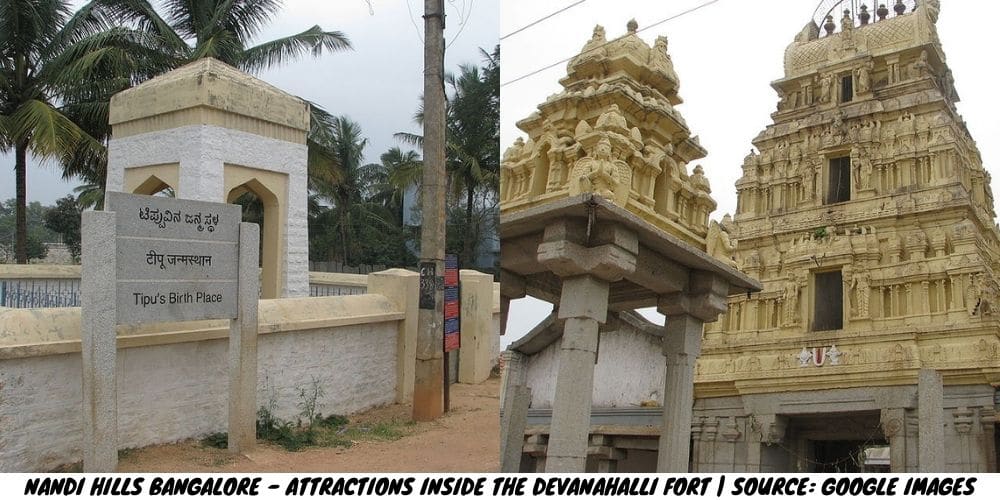 The outskirts of Bangalore offer a salubrious climate, fertile land, good rainfall ideal for growing grapes. A visit to the Grover Zampa Vineyards near Nandi hills adds a Mediterranean touch to a day out from Bangalore.  Grover Zampa is spread over 410 acres nestled in the foothills of Nandi hills. The vineyard is 920 meters above sea level is ideal for growing the highest quality grapes for wine production. 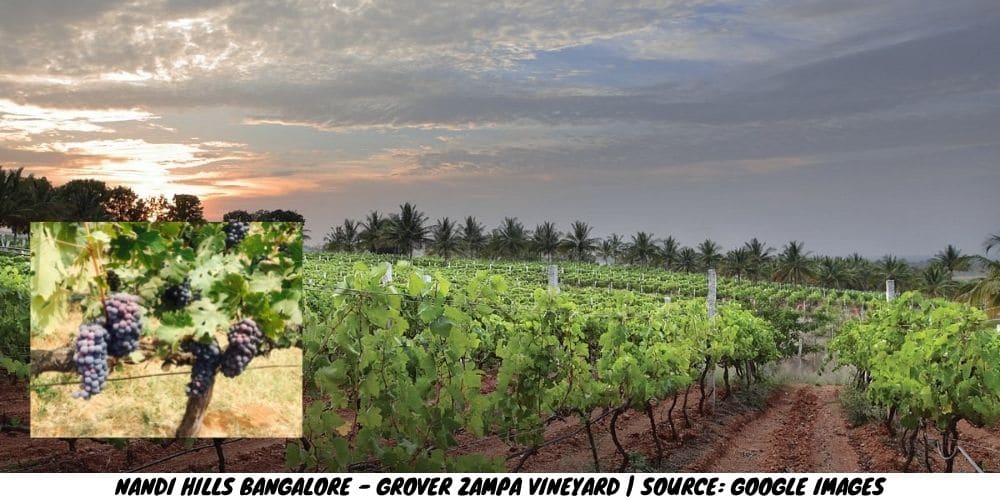 A typical tour of the vineyard offers a sneak peek into the fine art of winemaking. An elaborate barrel room showcases the fine art of crushing, filtering, fermenting and barreling the grapes to produce the finest wines in South India.

A guided tour will help visitors better understand the crafting or budding of the grape plants, cultivation, harvesting, processing and harvesting of grapes. The wines produced here age in imported oak barrels to produce premium varieties of wine like La Reserve and the Vijay Amritraj Reserve Collection. 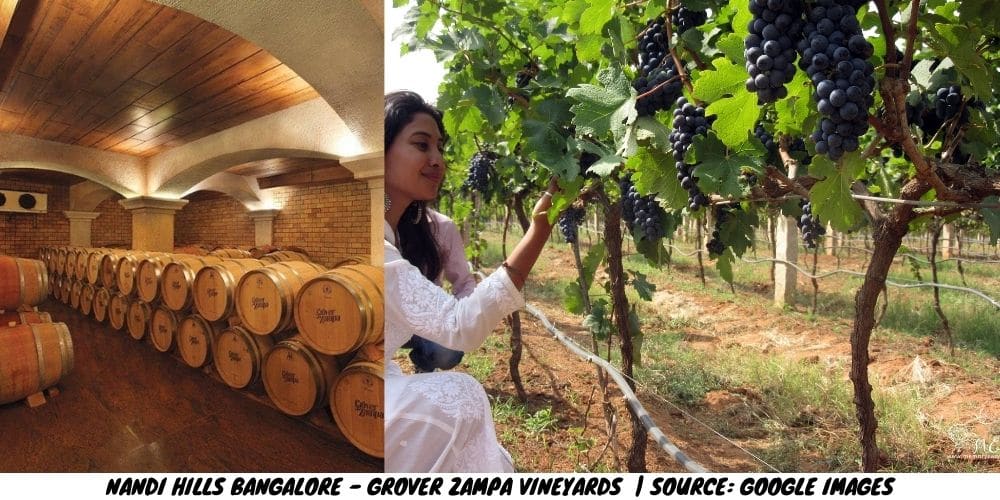 The quaint town of Muddenahalli is famous as it is the birthplace of Sir M Vishveshwaraya. The ancestral home and museum built to preserve his legacy attract tourists who will reminiscent the lives and achievements of this distinguished engineer and the architect of modern Karnataka. He was honoured with the Bharat Ratna in 1955 for his significant contribution to nation-building. 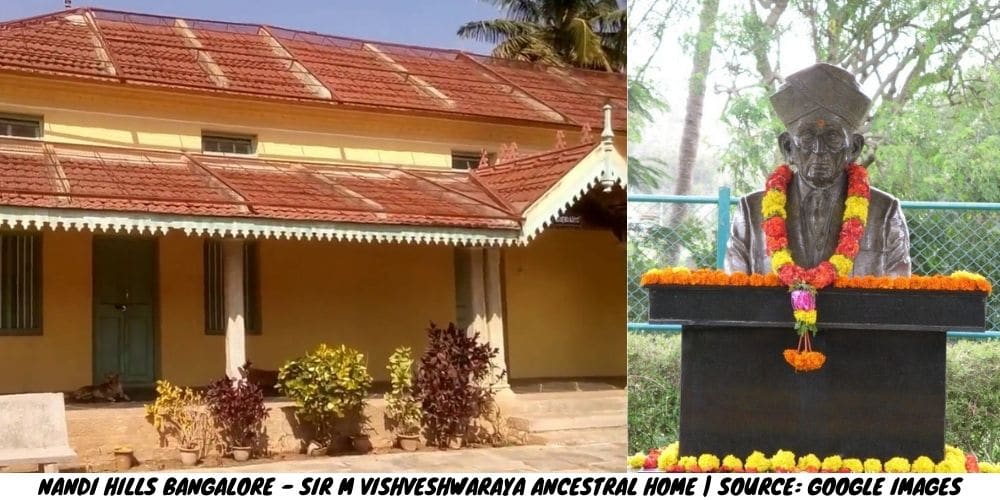 Sir MV as he is fondly remembered lived an inspirational life, having done distinguished public service. Sir MV was known for his sincerity, time management, diligence and dedication to a cause. His love for the Kannada language is well known. Vishveshwaraya most distinguished accomplishment was being the chief architect of the Krishnaraja Sagar (KRS) Dam. It was the largest reservoir in Asia when it was built. A scale model of the KRS dam can be found at the Sir MV memorial.

Tourists to his modest ancestral home showcase the many awards, titles that were bestowed upon him. Sir MV’s personal belongings like spectacles, cups, dictionaries, pens, visiting cards, and a grand durbar dress is sure to catch the attention of any visitor to Muddenahalli.

Learn more about Bangalore the Silicon Valley of India here 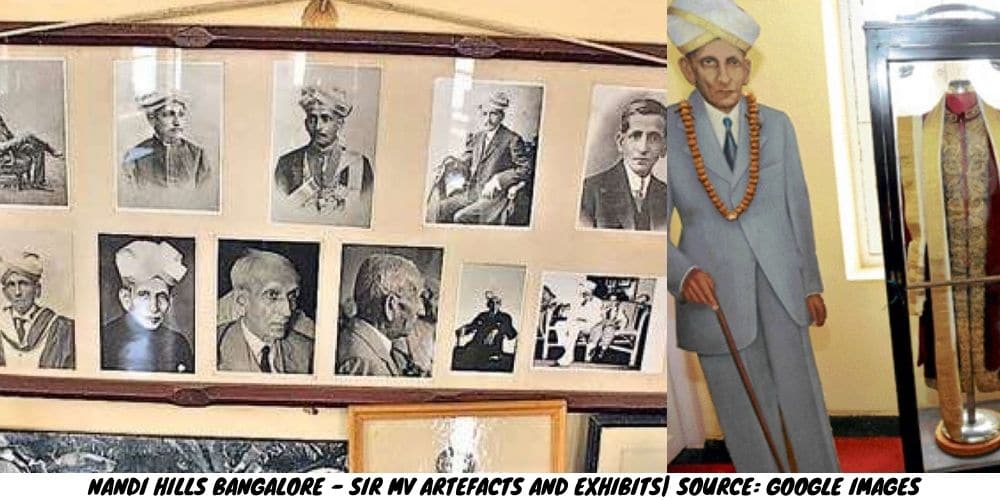 Bhoga Nandeeshwara temple is a 9th-century temple complex dedicated to Lord Shiva. Situated at the base of the Nandi Hills, the temple comes under the protection of the Archaeological Survey of India. The temple is known for its intricate carvings, while elaborate sculptures add to the grandeur of the temple complex. 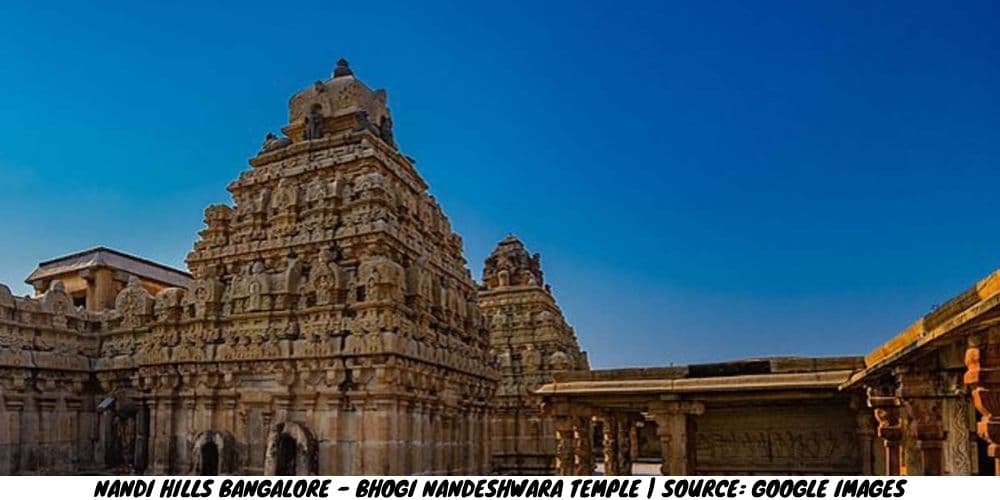 It is a twin temple complex consisting of the Bhoganandishwara and Arunachaleswara temples. The inscriptions and artwork depict aspects of Shaivism and Vaishnavism with sculptures of Durga, Lakshmi, Narasimha and Vishnu found here. An intricately carved sabha-mandapa (assembly hall) adds to the grandeur of the temple complex. Tourists can make a pilgrimage to this unique Dravidian style temple and welcomes tourists from all faiths. 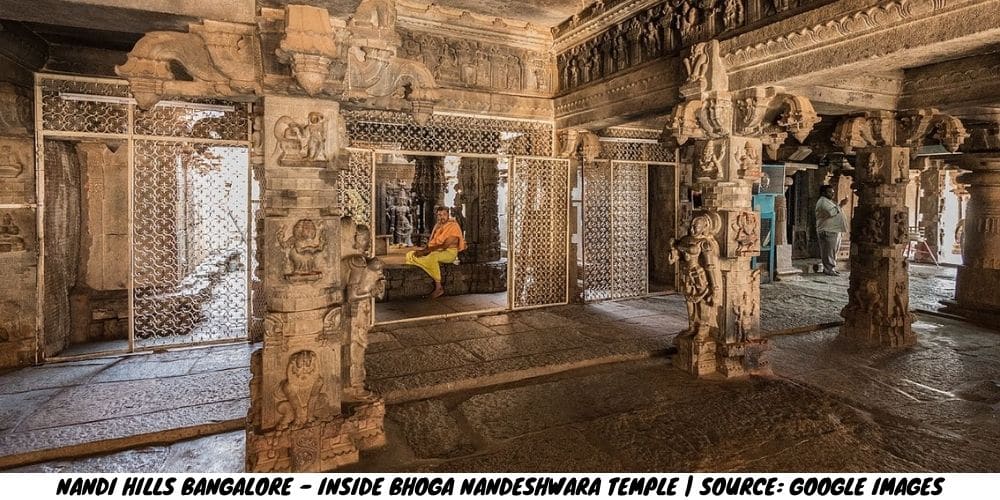 Brahmashram is a cave near the Nandi hills, formed by natural boulders over time. Sage Ramakrishna Paramahamsa performed meditation here as it acted as a perfect place for those seeking silence and solitude. Brahmashram is surrounded by lush greenery; its tranquil surroundings draw visitors in the hundreds every day. 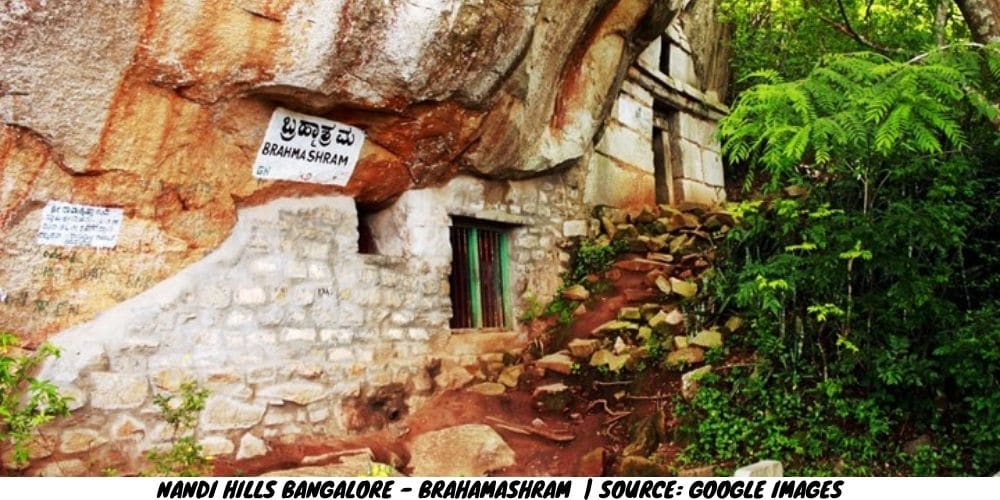 Tipu’s Drop is one of the many tourist attractions near Nandi Hills. It is located on a hillock 600m from the ground and is close to the Yoga Nandeeshwara temple. The scenic place has a bloody past, as it being a point where Tipu Sultan would order prisoners to be pushed off the cliff for crimes committed. Many people have committed suicide or accidentally fallen from here, adds to the enigma of the tourist place. 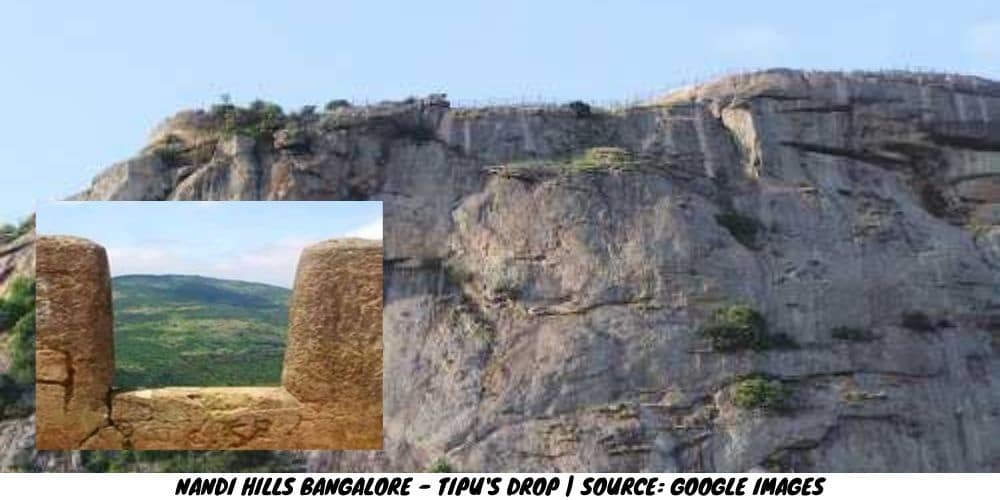 Plans are afoot to construct an iron grilled wall 450 m in length to prevent accidental deaths. Tipu’s Drop is being beautified with plants like Cyprus and magnolia to attract more visitors. An exclusive parking area and a sprinkler system are in the works to enhance it as a tourist attraction.

The dilapidated remains of the Tipu’s summer residence inside the Nandi Fort, offer a rare glimpse of the times of Tipu Sultan. This monument constructed in wood has brilliantly carved arches, pillars, painted walls and ceilings. This princely home is in a state of degradation due to inadequate maintenance. The antiques found here are unique to the architecture of the late 17th century. Tipu’s residence was named “Tashk-e-Jannat” meaning “The Envy of Heaven” by Tipu Sultan himself. 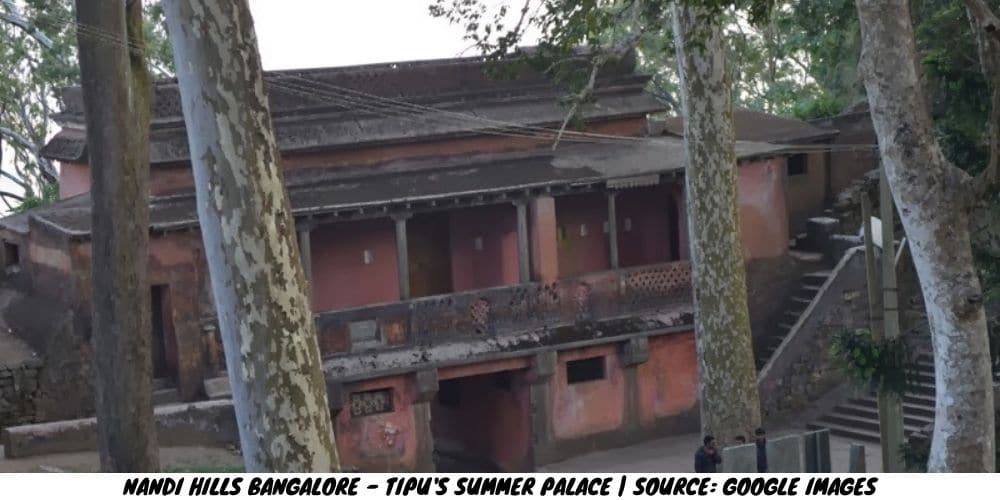 Skandagiri, also known as Kalavara Durga is a hill town just 70 km from Bangalore in the Chikkaballapur district. Skandagiri is one of the tourist places to visit near Bangalore that can be done on a shoe string budget. It is at an elevation of 1450 meters and is close to the Nandi Hills. Skandagiri is a hangout for trekkers and adventure lovers. A night trek and camping for the night beside a bonfire on the hilltop is a favorite activity among thrill addicts. 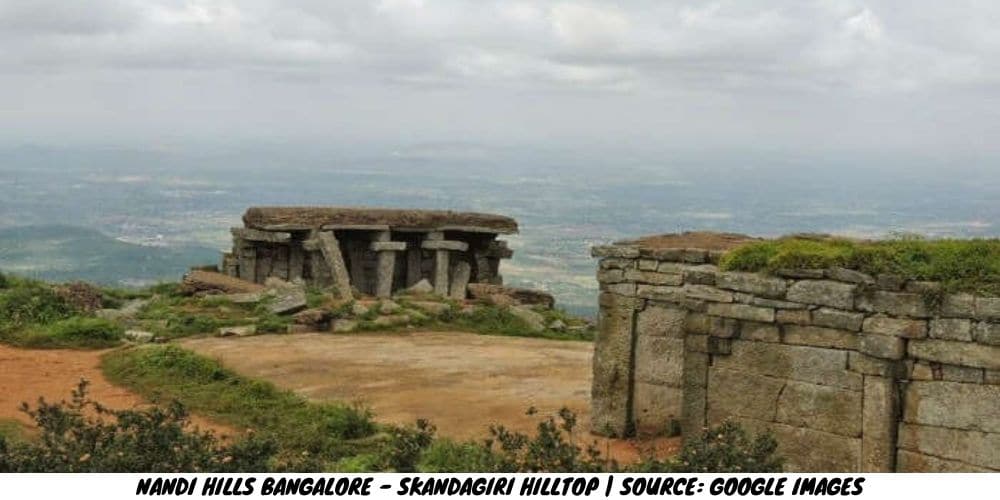 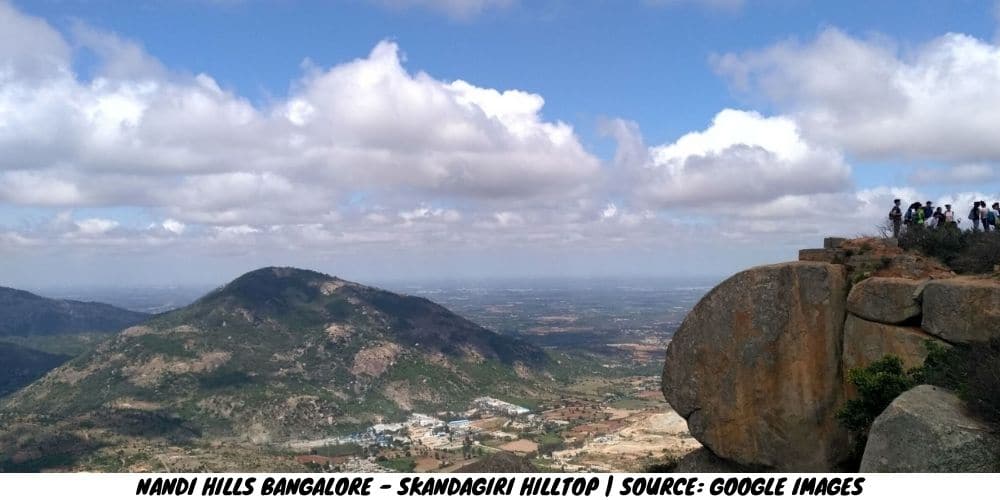 The natural landscape on the top of the hill is pleasant and breezy. The best time to plan a trip is from November to March. The 10 km trek is only for the physically and mentally fit and must be attempted, with adequate planning. Tourists should carry sufficient water, comfortable clothes, and shoes to make the ascent easy.

Amrita Sarovar in Nandi hills is a beautifully crafted water body and a prime source of drinking water in the area. The perennial springs that feed the lake look spectacular and beautiful in the moonlight. The site is also known as the “Lake of Ambrosia” or the “The Lake of Nectar”. It is ideal because of the calm and serene surroundings. 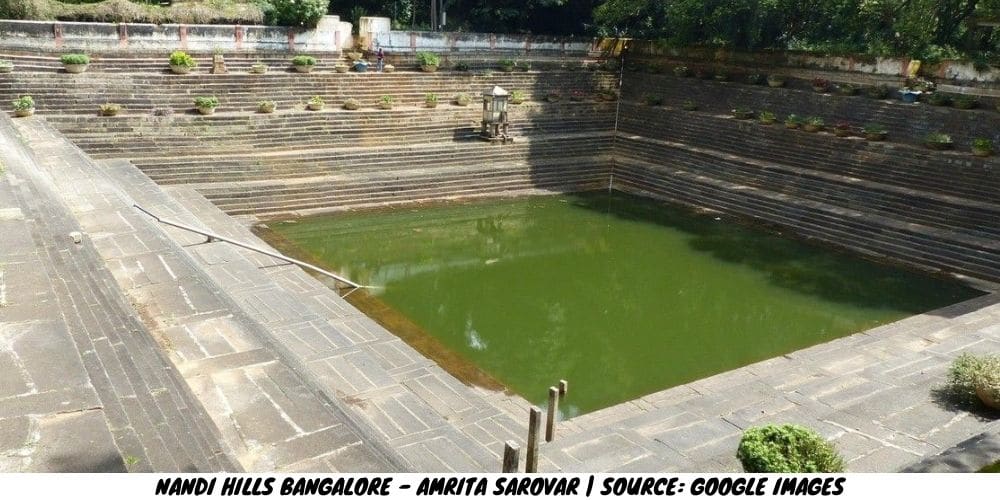 Bangalore has earned a reputation of becoming a hub of innovation in healthcare, biotech and software services. One beneficiary is the booming demand for medical tourism. The city enjoys a salubrious climate with lush greenery, parks and streets lined with trees. 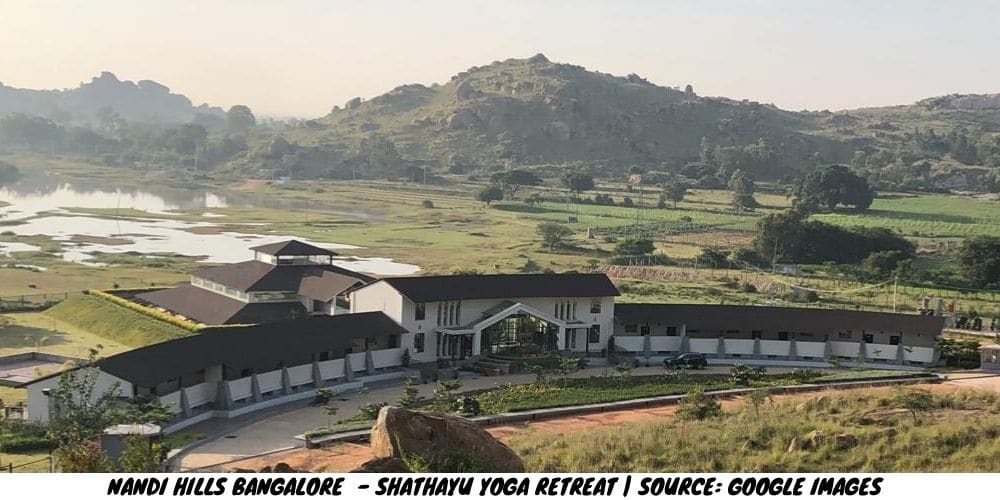 Shathayu Ayurveda Retreat is one such premier healthcare resort located away from the hustle and bustle of the Bangalore Metropolis, just 10 km from the Bengaluru International Airport. It provides holistic wellness services that take care of the mental, physical, spiritual, social, and lifestyle aspects of customers staying at the centre.  Our wellness programs are designed with over 120 years of ayurvedic practice passed down through five generations. 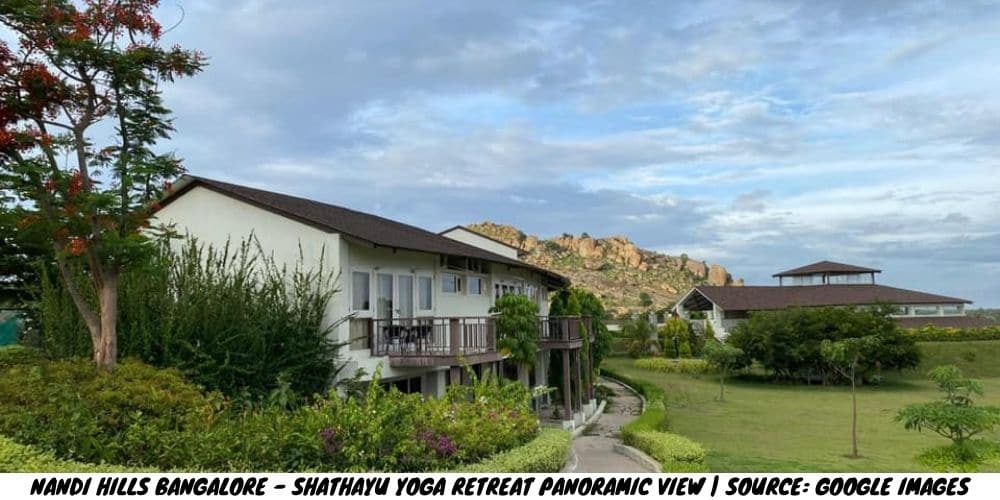 The Ayurvedic retreat centre is surrounded by hillocks on three sides with a perennial lake on the other offering side, offering a perfect ambience to recharge, recuperate and reenergize.  We customize our wellness programs to suit the specific needs of the customer.  Shathayu specializes in weight management, detoxification, pain management and de-addiction. Learn more about our parent company Shathayu Ayurveda here 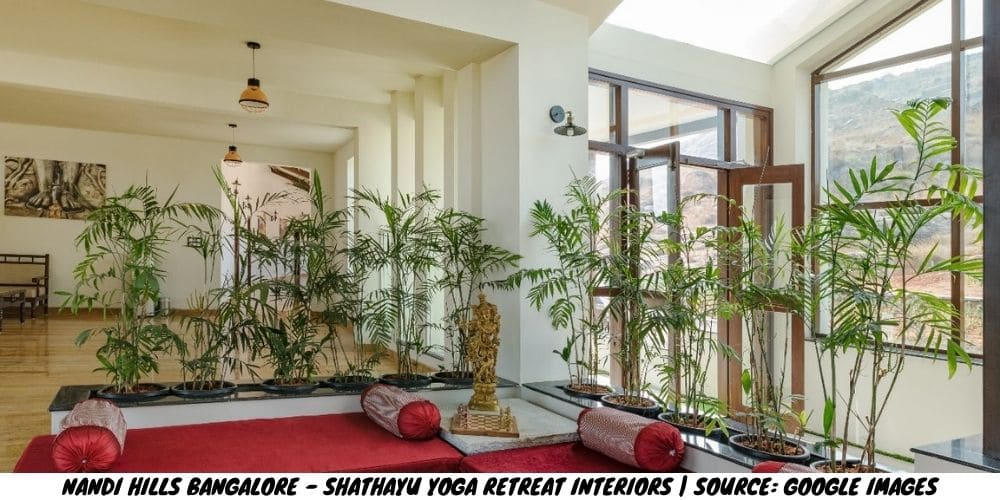 A delightful visit to Bangalore’s own hill station awaits one and all.

A visit to the Shathayu Ayurveda Retreat will offer tourists a unique opportunity to plan a fantastic holiday for two days and one night near Nandi Hills. A well-planned tour will give the dual benefits of visiting a hill station while taking full advantage of staying at an Ayurveda retreat that offers therapies for the body, mind, and soul.