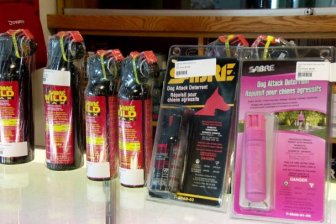 A holiday shift for a Manitoba retail employee ended with quite the sting.

“It just fully burnt the side of my face,” Marc St. Mars said.

Shortly after he arrived at work at a Unicity Mall store on Monday, St. Mars noticed two masked individuals piling up merchandise.

He went to talk to them as they bypassed the till and headed straight to the exit.

“I got closer to them to get their attention and without any warning or anything — they didn’t say anything to me — I got a face full of bear mace,” St. Mars said.

Other employees helped St. Mars get to an eyewash station and police were called.

The suspected shoplifters also pepper-sprayed an employee at a business across the street the same day.

“We’ve certainly seen an increase in the past year, over the past five years in the use of bear spray in criminal offences,” Winnipeg Police Service public information officer Claude Chancy said.

Winnipeg Police Service say there have been 889 crimes involving burning liquid as a primary weapon from January to September of this year.

That’s a 43-per cent increase from the same period last year and more than double the amount in 2016.

“There’s a lot of factors that come into play,” Chancy said. “Definitely the accessibility of the product is a major factor. I know there is provincial legislation being looked at right now.”

Manitoba’s justice minister, Kelvin Goertzen, told the federal government changes need to be made to the Criminal Code.

He wants to see modified bear spray classified as a prohibited weapon.

“There’s no legitimate purpose to camouflage it or to alter it,” Goertzen said. “There you’re clearly trying to prevent somebody from seeing that you have it and to use it in some way that is harmful to people.”

This wasn’t the first threatening incident St. Mars has had at work. But he hopes new regulations would prevent another like this.

“It shouldn’t be as accessible as it is,” St. Mars said.