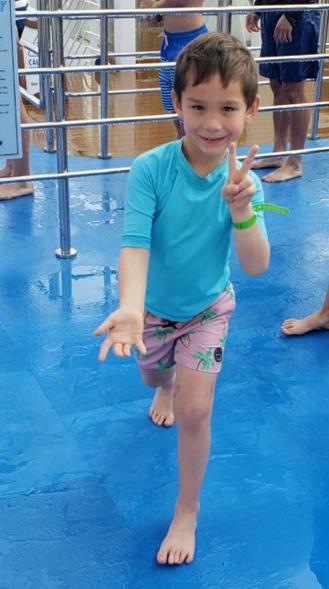 The 5-year-old boy who was swept away by “raging floodwaters” in California was still missing Tuesday, authorities said.

Officials deployed both water and air rescue teams to search for the boy, identified as Kyle Doan, who was with his mother Monday when they became stranded in the flooding near Paso Robles.

Rescuers spent five hours looking for the kindergartener Monday, but were forced to call off the search because of the extreme weather conditions that have already killed at least 14.

Kyle and his mother were on their way to his school when their truck became stranded just before 8 a.m. Bystanders were able to pull the boy’s mother from the car, but Kyle was swept out by the “raging floodwaters” and carried downstream, police said. Officials theorize he was likely taken into a river.

So far, the only sign rescuers have found of the boy is his shoe.

Kyle, who has short dirty blond hair and hazel eyes, was last seen wearing a black puffer jacket with a red liner, blue jeans and blue and gray Nike tennis shoes. He is 4 feet tall and weighs 52 pounds.

Police said looking for the boy remains their top priority.

“The water level is high and continues to be fast moving. The public is strongly cautioned not to conduct self-initiated searches and put themselves in harms way and become a victim requiring resources that would otherwise be used for searching.”

The stormy weather has downed trees, created sinkholes and triggered mudslides across the state, and dumped up to 14 inches of rain in some areas.

Forecasters expect the rain to continue through Tuesday.