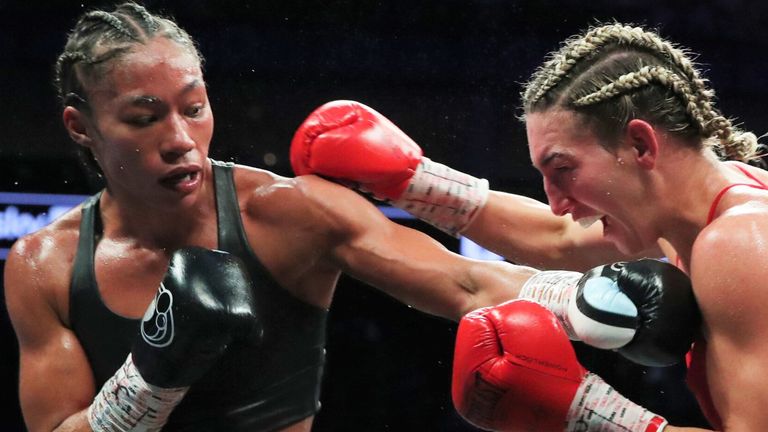 Mikaela Mayer has targeted a fight with Katie Taylor in 2023 after confirming she will move up to lightweight for her next fight, which could be announced next week.

The American told Sky Sports News there remains “unfinished business” with Alycia Baumgardner, who beat her by split decision in October to unify the IBF, WBC and WBO super-featherweight titles.

But Mayer’s immediate plans are to move up a division and prove herself at lightweight so she can challenge undisputed champion Taylor.

“Katie Taylor has always been on my list. I have a lot of respect for her, she has accomplished a lot in this sport and I want to challenge myself against her.

“That’s what’s great about the women of this era, we’re willing to challenge ourselves in multiple weight divisions. We go where the big fights are.

“It would be great [to fight Taylor]. We both have proven ourselves. She’s obviously been proven for many years but I think I had a great year. I feel like I have a very strong fanbase and I think people want to see that fight. Hopefully, we can get it done.”

Mayer will enjoy Christmas with family and friends in Colorado Springs but then it is straight down to business as she prepares for her next fight.

“I start camp as soon as it’s over,” she said. “I’m still waiting on the exact fight date but the deal is about 90 per cent done.

“I’m excited to announce that, probably sometime next week.”

It is over two months since Mayer suffered her first professional defeat against Baumgardner at London’s O2 Arena.

It is a loss that still rankles but she has been frustrated in her attempts at a rematch.

“There’s unfinished business there,” said Mayer. “The rivalry is still very much alive. I feel like there is more to be done.

“There’s no secret I want my rematch with Baumgardner and I think she’d be silly not to move forward with that.

“I understand her wanting to go and fight [Hyun Mi] Choi but Choi doesn’t look like she wants to fight anytime soon. She gone and got injured, so we’ll see.

“Ultimately I want to make big fights for the fans. If she wants to be a top-notch champion, she’ll want to do the same.

“When could that rematch happen? I’m not going to sit around and wait. There are lots of big fights for me to have and other divisions for me to conquer.”