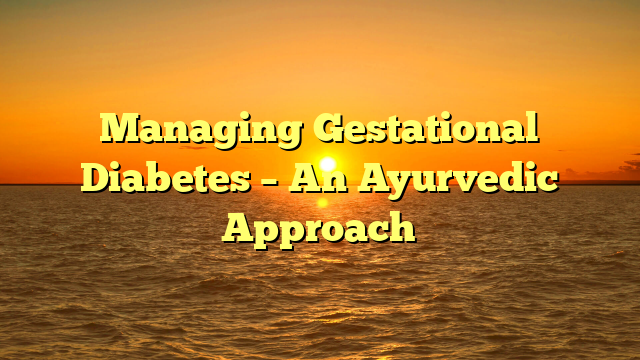 Gestational diabetes is a type metabolic dysfunction that develops in women during pregnancy. Usually diagnosed in 24th to 28th weeks of pregnancy, about 4% of pregnancies present with this complication today. Its rate is increasing lately with modern lifestyle habits and food intake patterns.

Usually, high blood sugar levels are detectable during second and third trimester of pregnancy. The women who have never had Diabetes before in life can develop it suddenly during the pregnancy. In most of the women, blood sugar levels reach normal limits after the delivery of the baby but a few women become Diabetic for the rest of their lives.

This situation should be managed urgently as it poses threats both mother and baby. E.g. Baby may develop hypo-glycemia due to the over effects of Insulin which also needs close attention and timely management. Babies sometimes also face irregular weight gain issues before birth along with a comparatively higher risk of developing obesity and diabetes in later life. On the other hand, mother can develop permanent diabetes in later life and/or might have to undergo caesarean section for baby’s birth.

Although there is no direct reference of “Gestational Diabetes” in Ayurvedic texts, there are references of Garbha Varidhi. Garbha Varidhi is a complication of Pregnancy described with women’s abdomen rising more than usual for its gestation, big size of baby (macrosomia), difficult labour and increased perspiration. Also, once Diabetes develops in gestation, it is counted as one of the Pramehas (Urinary flow problems) in Ayurveda and is named as one of the “Madhumehas” (sugar in urine) and managed likewise only. Other Madhumeha are Type 1 and Type 2 Diabetes.

During Pregnancy period, hormonal changes occur in a lady. Some of these hormones impede or dampen the effects of normal insulin produced in the body. Reason being that the excess sugar is readily available to the baby for his/her development. But this also leads to a compensatory overdrive by the body to produce a bit extra insulin for eliminating this excess sugar in blood. In some women, this compensatory insulin is not produced enough to overcome the surge of sugar in blood. This finally leads to Gestational Diabetes.

It is also thought that when a pregnant women’s body produces antibodies against her own pancreas, it causes lesser insulin release. This is also a potential cause for diabetes.

Gestational diabetes can be intelligently managed in the Ayurvedic way if one is aware of the risk factors and is willing to bring a lifestyle change including exercise and food intake as per the directions of Ayurvedic texts.

Besides other direct causes, there are certain factors which can increase the risk or are indicative of developing Gestational diabetes in pregnant women. They are:

Gestational Diabetes usually presents late in second trimester and third trimester and so detection is sometimes delayed. Once diagnosed, the treatment is aimed to keep sugar levels fasting – 90-99 mg/dl and post prandial under 120 mg/dl.

Gestational diabetes may present with one or more of these symptoms :

In classic ayurvedic scriptures, diabetes is named as one of the “Prameha”. Prameha is a broader term that encompasses all types of Pra– flow Meha– urine (Urinary Flow) diseases. Amongst these, Diabetes is subcategorized as Madhumeha where Madhu-Sweet/sugar and Meha-urine.

Diabetes and discussion of Gestational Diabetes also comes under this topic.

Garbha Varidhi is Ayurveda is to be managed with a lifestyle that help in reducing aggravated dosha- dhatus.

Now if we talk particularly about Gestational Diabetes, there is a set of instructions to deal with the situation on the basis of 3 pillars- Aahaara (Food), Vihaara (Lifestyle modifications) and Aushadha chikitsa (Medicinal Therapy). We will now discuss how these 3 steps individually and then all in unison help us manage this condition.

Even though there is a high urge of eating in Pregnancy, Ayurvedic principals of Aahaara advocate the importance of eating nutritional rich foods rather than just about anything and anytime wanted. Ayurvedic Diet that helps in the management of gestational diabetes:

Ayurveda instructs to refrain from some food items in cases of Gestational Diabetes or even for high-risk group who have a chance of developing it. These are:

Vihaara /Lifestyle Modifications For Gestational Diabetes As Per Ayurveda

Ayurveda recommends a holistic and clean lifestyle for management of Gestational Diabetes.

When performing yoga during pregnancy, the following should be kept in mind:

1) Yoga should not be practiced on an empty stomach.

2)Yoga should be practiced from 18 to 32 weeks of gestation.

3)Yoga poses involving twisting, lying on the abdomen should be avoided.

Mental and emotional stresses of pregnancy have an indirect adverse effect on uterine environment and the consisting baby. This is why importance of Meditation is evident. A healthy state of mind with a healthy body in unison result in a smooth delivery.

Yoga Aasanas / Exercises for all Trimesters of Pregnancy:

Vijaysaar is named scientifically as Pterocarpus marsupium.  The heartwood of Vijaysaar is used to make tumblers/ vessels and beakers wherein water is left overnight to have in the morning daily. Intake of this water has anti-glycaemic effects. The presence of Epicatechin in Vijaysaar has properties of enhancing Insulin production and release.  When Vijaysaar is consumed it activates the pancreatic β-cells due to the production of insulin. Also it helps in conversion of proinsulin to insulin as shown in vitro experiments now.

Guduchi or Tinospora cordifolia has anti-glycaemic properties, through which it can aid in lowering the blood sugar levels. Its crop is abundantly found in India.

Bhuiamala is an herb which belonging to the family of Euphorbiaceae which is distributed widely in hotter areas of India like Deccan and South India. Scientifically named Phyllanthus amarus, it has potent blood sugar lowering, anti-oxidant, anti-inflammatory, anti-mutagenic activities.

Tulsi or Ocimum Sanctum is widely revered in Indian households as a pious Deity.  It has many medicinal and healing properties. Tulsi is hypoglycaemic in nature and acts by improving insulin secretion and pancreatic beta ß function. It also increases the glucose intake by muscle cells. Hence Tulsi is beneficial in lowering blood sugar levels. For the method of consumption, one can chew Tulsi leaves or make Tulsi tea. Also, it can be soaked overnight in water and to be drunk in the morning empty stomach.

Amalaki, commonly known as Amla in India is found effective in the management of pancreatitis. Thus, its beneficial effects on pancreas are evident. Chromium present in Amla increases our body’s response to insulin. It can be consumed regularly in the form of amla juice, amla murabba (sweet pickle) or amla powder.

Gurmar is a magical herb which literally means “Sugar-killer” in Hindi. It has been used since ages as a remedy for treating diabetes- type 1 and type 2. It aids in reducing blood sugar by increasing the insulin levels in our body. Triterpenoid and saponins present in Gurmar are known to supress the taste of sugar on the person’s tongue. It can be consumed by mixing its powder in water 30 minutes after lunch daily.

Ashwagandha has shown benefits for gestational diabetes apart from a multitude of benefits in other disorders. Phytochemicals present in Ashwagandha help regulate secretion of insulin in Gestational and Type 2 Diabetes. It also promotes health by maintaining adequate weight and empowers with the strength which is very much required for both mother and baby during pregnancy.

In order to consume Ashwagandha, take its powder (aka Ashwagandha Churna) and mix thoroughly in milk. Have it in recommended times and dosages as per an Expert Ayurvedic practitioner’s advice only.

Neem is also a widely available herb that has anti-diabetic, anti-malarial, anti-oxidant and hepato-protective properties.

Aegle marmelos by Scientific name, this herb is also exhibits hypoglycemic activity. It is now shown to prevent peak rise in blood sugar after 1 hr of food ingestion as documented after oral glucose tolerance test.

Charatin and momordicin present in Bitter Gourd help in lowering the blood glucose. Drink bitter gourd juice every morning on an empty stomach.

Jamun seed is hypoglycaemic which means it reduces the blood sugar level. In a glass of water, add jamun seed powder and stir it well. Have this water in the morning.

Ginger is known to control not only abnormal blood sugar levels but alsoregulate insulin levels. Boil a piece of ginger with a cup of water in a saucepan. Simmer for 5 minutes and then strain. Drink this water twice a day in divided portions .

Curry leaves help in reducing blood glucose level and improves insulin sensitivity of our body. One can chew a few curry leaves or add it in your dishes.

Fenugreek is known to help in increasing glucose tolerance thus aiding lowering of blood glucose level. Soak a teaspoon full of Fenugreek seeds in water overnight and drink it in the morning on an empty stomach. One also has to chew the seeds along with it.

Moringa is a plant rich in Vit C and antioxidants that help in treatment of Diabetes (especially the diabetes acquired in later life and not congenital diabetes).

Cinnamon helps lower sugar levels by reducing the oxidative stress. In warm water add half a teaspoon of cinnamon powder and drink this daily to control blood sugar levels.

Drinking tea made up of mango leaves can aid in reducing blood sugar levels. The mango leaves should be boiled for 15 minutes and drink it on an empty stomach.

Ayurveda and its natural remedies play have an immense potential in controlling Gestational diabetes. Exercising, following a healthy daily routine and monitoring the food we eat holds a major role in controlling gestational diabetes. Ayurvedic herbs like Vijaysaar, Guduchi, Bhuiamala, Gudmaar and Tulsi can aid in this condition. Likewise, Yoga and meditation play an important role by relieving stress and making a safe environment for mother and baby both.

As they say “Let food be thy medicine and medicine be thy food “. Food is the best medicine given to mankind by the God.

Did you find this post useful? Would you like to get back to it later? Save THIS PIN below to your Pinterest Natural Living or Ayurveda board!

The post Managing Gestational Diabetes – An Ayurvedic Approach appeared first on Honey Fur For Her.