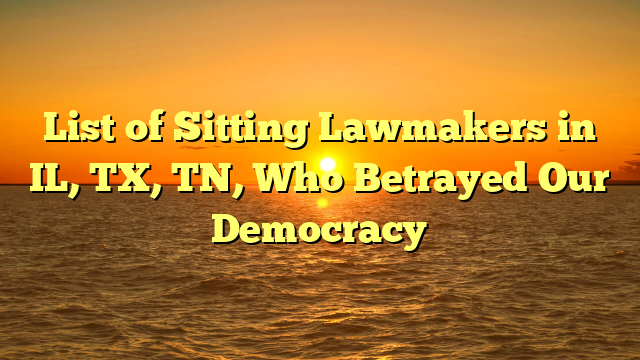 As the January 6th Commission convenes in Prime Time on Thursday evening (7/21), it is good to remember those representatives and Senators who betrayed our democratic values on January 6th. I have listed the states where I live and where my son and daughter live, as the names on the lists below do not deserve our future votes for office.

Here is an opinion reprint from “Daily Kos” that names the traitors in office.

Now that the January 6th committee has spent more than a year investigating the insurrection at the U.S. Capitol, they have unearthed evidence, in physical records and eyewitness testimony, that overwhelmingly suggests former President Donald Trump desperately schemed to retain power after losing the 2020 election and saw this plot aided or advanced by an increasingly craven series of lawmakers, lackeys, lawyers,  aides, and right-wing extremists.

Many of those lawmakers who parroted Trump’s meritless claims of voter fraud did so at relatively the same clip he did, using their sizeable platforms, power, and influence to promote conspiracy theories about the results of the election that were disproven by the nation’s Justice Department and intelligence apparatuses and dismissed by court after court and judge after judge—including those judges Trump appointed.

When Congress finally met for the joint session on Jan. 6 to count certified elector slates and Speaker of the House Nancy Pelosi gaveled in, throngs of protesters would breach Capitol police barriers just minutes later. Trump, live from the Ellipse, was finishing a speech where he urged his supporters to march on the Capitol. One line encouraging this in his draft speech, according to White House records provided to the committee by the National Archives, shows Trump ad-libbed this call to action four times on Jan. 6.

Testimony and other evidence collected by the committee indicate too that Trump initially tried to conceal a plan to march on the Capitol even as he, members of his campaign staff, and rally organizers moved full steam ahead. This detail drastically undercuts claims by Trump and his allies currently in Congress that say January 6 was a peaceful protest that spontaneously went awry.

The committee has also shown evidence of at least six Republican lawmakers seeking preemptive pardons from Trump in the wake of the insurrection. In a request spearheaded by Rep. Mo Brooks of Alabama, he went so far as to ask for a preemptive pardon for all 147 members of Congress who lodged an objection to Joe Biden’s Electoral College victory. Brooks also requested pardons for 126 Republicans who joined an amicus brief filed in Texas that sought to challenge election results in Michigan, Wisconsin, Georgia, and Pennsylvania.

Brooks has since defended his ask while simultaneously trying to distance himself from his own inflammatory remarks delivered at the Ellipse on Jan. 6.

Notably, Brooks said he was making his inquiry “pursuant to a request” from Rep. Matt Gaetz of Florida. More than six weeks after Trump finally left office, it was reported for the first time by The New York Times that Gaetz was under investigation for alleged sex trafficking and sex with a minor.

In addition to Brooks and Gaetz, Hutchinson specifically named House Republicans Scott Perry of Pennsylvania, Louie Gohmert of Texas, Andy Biggs of Arizona, and Marjorie Taylor Greene of Georgia. All have issued various denials about the pardons but remain vocal, staunch supporters of Trump and have continued, until now, to cast doubts or aspersions on the Jan. 6 committee’s work and standing.

Trump never issued the pardons and Brooks fell out of favor with him after he urged prospective voters during his failed campaign for a Senate seat to put the 2020 election “behind them.” Trump said Brooks went “woke” and endorsed his opponent.

The Senators who voted to overturn the 2020 election after the insurrection are:

House members in Texas, Illinois and Tennessee who voted to overturn the 2020 election results after the insurrection:

One additional Texas legislator on the list has subsequently died.