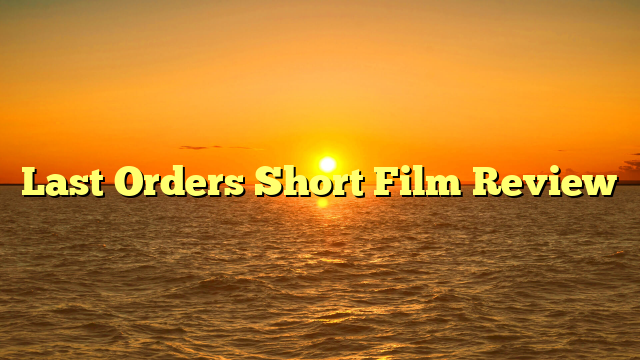 Last Orders begins in a dark and quiet London pub, this is when the benefits of lockdown really did help film makers alike as they could take advantage of fantastic locations. In this case for a horror film, a deadly silent street and pub makes for a perfect setting and feeds into the genre. The film is separated into chapters almost a retelling of the landlords past and future. As the landlord shuts the pub for the night, there is just one man sitting at the bar who later confirms that they have crossed paths before. He then disappears into the night, leaving the landlord full of questions and regrets from his past. As the story develops, the landlord must battle with the past that constantly haunts him, unable to escape.

This short has some supernatural elements to it which adds another layer to the piece. The sound kept the audience on their toes throughout, the constant dripping of the tap, the heavy thuds become heightened when coupled with the loneliness of the pub. Although the film was shot using just one location, its amazing to see what can be done with limited resources and budget. Occasionally, film makers believe the bigger the budget the greater the film. This is not the case, if you utilise a space and experiment with a variety of camera angles, sound and a good cast, there is a potential for greatness. It merely depends on whether directors are willing to put in the work and imagination to create something truly unique. Director Jon James Smith has certainly succeeded in this respect and has taken advantage of the lockdown to create Last Orders.

I think what would have helped the story was to just make the landlords past a little bit clearer to the audience, so that we can fully understand his fears and what has been taunting him as the story develops. At times this was not always obvious, so a little more detail into the main characters past would have helped. However, this horror makes for an extremely entertaining watch especially if you are an avid horror fan like me. The best horrors play on the audiences’ emotional response to certain scenes and tease you with a non-scary scene when you were expecting a jump scare or blood coming down the walls. Jon James Smith is certainly familiar with this horror technique and tantalises our horror taste buds with these kinds of shots.

Last Orders is a great film to curl up on the sofa to and hide yourself behind a blanket with its creepy characters and atmospheric sounds. This short is a great example of directors, writers, actors, film makers taking a chance and turning something, which can be considered a limitation such as lockdown, and turning it into something positive.