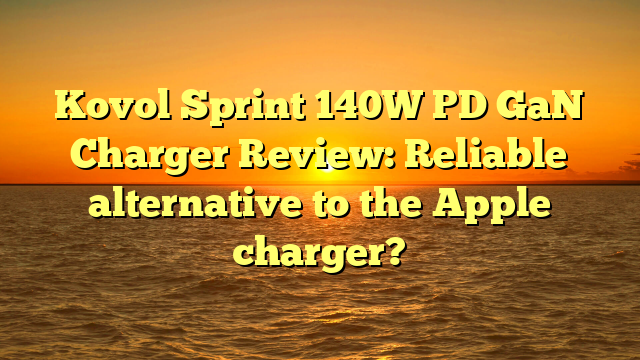 The Kovol Sprint 140W is currently the flagship device from the wall chargers series, being able to deliver a phenomenal power output, easily charging up even the larger 16-inch MacBook Pro. But, while a couple of years ago, I would have said that Kovol and other third-party charger manufacturer would have no issue dominating the market, something has changed in the last year.

Apple itself released a 140W GaN charger and it’s not that expensive. Indeed, Apple saw that they were losing in this market segment, so they finally got around and developed their own solution, which had an obvious impact on the third-party manufacturers. Was it that severe though? 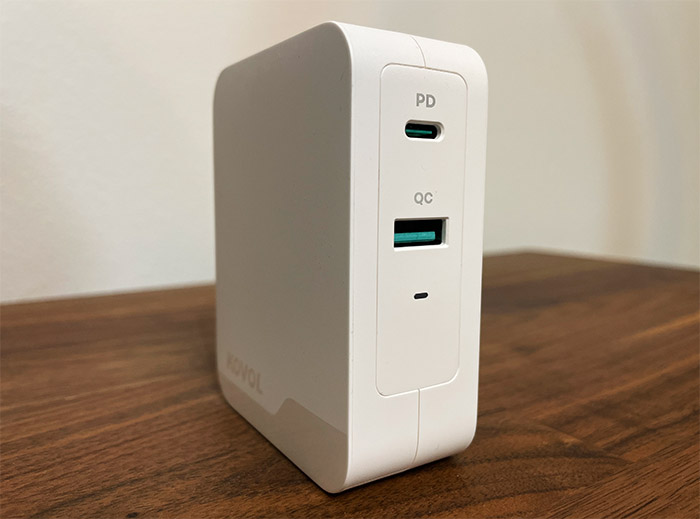 I do think that a lot of people will prefer the original charger, but the devices such as the Kovol Sprint 140W offer something that Apple does not and that’s multiple ports. And, at the moment of writing, it’s also a bit cheaper. Indeed, the Kovol Sprint 140w offers A USB-A port, besides the USB-C PD port, which is not a huge selection of ports, but still allows for two devices to be charged at the same time.
And you’d be surprised to see just how many devices still have USB-A ports in their packages (spoiler alert: most of them do).

I have mentioned several times just how compact the GaN chargers are and they have reached incredible sizes. Just have a look at the Unitek 66W – you can put several in the pocket of your jeans. As expected, the Kovol Sprint 140W, despite also using the same technology is a bit bigger, but still compact for the power output that it manages to produce. The charger measures 3.4 x 2.7 x 1.3 inches, so it’s about the same size as the Apple 140W charger.

The device is made of plastic and it’s covered by a white matte finish which retains less fingerprints than a glossy finish. Depending on the place you’re living, the plug will differ, so anything outside the US gets a large protruding plug.

In the US, the plug is retractable, so it will be a bit easier to carry around. On the opposite side of the plug, there is a small LED which stays turned on as long as the charger is connected to a power source. Above it, there are the two aforementioned ports, the USB-C at the top and the USB-A port immediately below it. The USB-C port by itself can output up to 140W to a single device, while the USB-A port can only go up to 18W. Of course, when both ports are used at the same time, the USB-C will be limited to allow the output power to flow through the USB-A port as well.

First, I checked the values that we can get with the original charger and they were somewhere in the 39W (20.28V and 1.9A amperage). Using the Kovol Sprint 140W (still with the original Apple cable), the power output moved between 52W and 57W, depending on the type of apps that I was running.

And the voltage moved between 20.05V and 20.06V (again, depending on the load on the computer), while the amperage fluctuated from 2.45A to 2.87A. It’s a very good performance and I really liked the almost clean 20V voltage.

I then switched to an iPhone 12 and using the original cable and the same original charger as before, the values were nice. The power output was on average 10W with the voltage steady at 8.93V.

Keeping the cable and the iPhone, I switched the Apple charger for the Kovol Sprint 140W GaN charger and the values were different. In a good way. The voltage was again, very close to ideal, staying steady at 9.08V, the amperage fluctuated between 1.70A to 1.90A. And, as you may anticipate from the values, the power output moved between 16W to 19W, which is almost double what the original charger can offer, so the phone should charge up faster.

What about the secondary port, the USB-A? Well, as I mentioned already, it can only go up to 18W and, to push it to the limit, I used an AGM Glory Pro smartphone that was completely drained in terms of battery. It didn’t reach 18W, but it did manage to go up to 15W with the voltage moving between 8.15V to 8.35V, so a bit less stable than the USB-C.

Obviously, I wasn’t able to push the charger to its limit with my current devices, but I hope you still got an idea of what to expect in terms of power output. And I am also sure you’re interested whether connecting and disconnecting a device will briefly disconnect the other device that’s charging, as it happens with too many chargers on the market.

The answer is no, it seems that the USB-A and the USB-C ports are on completely separate controllers. Also, I was curious whether the Kovol Sprint 140W draws some power while it’s in idle mode and it does, but a negligible amount, just to keep the LED on and the ports prepared (unlike the Hyphen-X charger). What about the heat management? I have tested a lot of GaN chargers and they all had three things in common.

First, there’s the compact size, then, there was the higher output than usual (as compared to the traditional chargers) and lastly, the heat management was phenomenal. I could push the chargers to their limit and they would barely get warm – don’t believe me, check the chargers that I tested, most have a thermal picture. So, as expected the Kovol Sprint 140W was also able to maintain a decent temperature, despite the high output (perhaps only a slightly bit warmer than other chargers).

That’s only possible due to the GaN technology which doesn’t let the heat go to waste, something that was very common with the traditional chargers. Furthermore, Kovol promises that there is surge protection in the form of the Q-Pulse technology and there is also protection against over-heating.