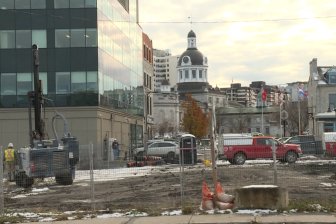 Deb Lefebvre is a board of directors member of the Registered Nurses’ Association of Ontario and says hospital staff are are under strain.

“The level of moral distress is incredibly high,” said Lefebvre.

According to Lefebvre, nurses have been under extreme pressure long before the pandemic exacerbated the strain on the health-care system in Ontario.

Lefebvre anticipates it will not get any better over the upcoming holiday season.

“The Kingston area is facing an unprecedented nursing shortage. It’s been percolating for some time,” said Lefebvre.

She says there are a number of contributing factors contributing to the staffing shortage, but says the finger can be pointed mostly at the Ford government’s appeal of Bill 124 and the effect it’s having on nurses across the province.

“This is just another level of disrespect of calling us heroes on one hand and then appealing a decision that allows nurses to negotiate,” said Lefebvre.

At Kingston Health Sciences Centre, the effects are being felt between early retirements, nurse burnout and vacation time during the holiday season.

“With every challenge that we have, if you have less urgent medical needs, consider alternate health-care resources,” said Hann.

Along with the wage cap under Bill 124 and the increase in early retirements, Lefebvre says emotional and physical burnout is taking a toll as well.

“People are feeling very anxious. Just this morning I had a nurse reach out to me who was in a full-blown anxiety attack,” said Lefebvre.

KHSC has implemented signing bonuses for newly-hired nurses and is paying premiums for those that pick up extra shifts over the holidays.

Hann says along with those incentives there are resources in place to support nurses.

“Really focusing on wellness strategies at work. There’s supports here that we provide, you know, really working with our employees,” said Hann.

Lefebvre says another important step to show support for nurses is for the provincial government to drop its appeal of the recent court decision on Bill 124 and include nurses in the decision-making process on matters that concern their careers.