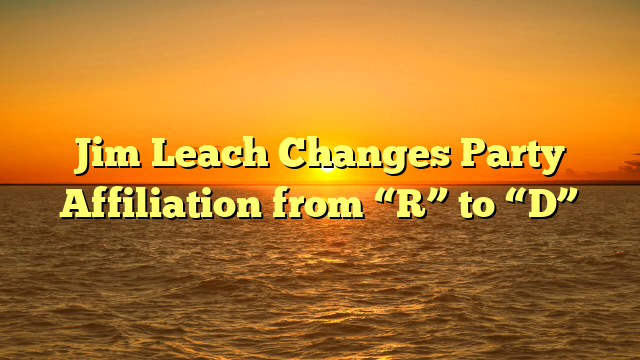 I grew up during a time when Democrats and Republicans co-existed relatively peacefully. We have the example of Al Gore’s 2000 concession speech after the Florida “hanging chad” controversy (look it up if you’re too young to remember it). My parents were best friends with Bus and Arlene Raymond of Independence, staunch Republicans, and Arlene (my godmother) was even a Republican lobbyist in Des Moines. So you’ll have to excuse me if the news that Jim Leach has left the Republican party after 30 years as a House of Representative Republican from Iowa is worth mentioning—especially when you hear his words as to why.

Also, back in 2001, on Veterans’ Day (Nov. 11th) right after 9/11, I funded a gathering called “Celebrate Citizenship,” a patriotic sing-along gathering post 9/11, with the money raised to go towards college scholarships for the children orphaned in  the World Trade Center explosion on 9/11. Whatever we raised would be matched by my parent company, Sylvan Learning Corporation.

I rented out the Pleasant Valley High School Auditorium and set up a program, which included my students reading from their essays, the Glenview Junior High School Band from East Moline, IL, (best in the state of Illinois that year by actual vote of Illinois music educators) playing for a sing-along of patriotic songs, and various speakers, which included a representative from Channel 6 (Ryan Nolan), a representative from the “Daily Dispatch” (John Marx) and, as the keynote speaker,  James Leach, then the long-time GOP House of Representative delegate from the state of Iowa. Leach served in the House of Representatives for Iowa from 1977 to 2007, thirty years. Getting him as my speaker that day was quite a coup, as he had numerous speaking engagements around the state, but he was most gracious in agreeing to come, and that, in itself, is a story I will tell on here in more detail at another time.

Jim Leach was a good guy: a moderate Republican for 30 years who lost re-election to Dave Loebsack, a Democrat, in 2006. Leach was then, and is now, a thoughtful, intelligent leader who did not just vote the party line.Leach was the John L. Weinberg Visiting Professor of Public and International Affairs at the Woodrow Wilson School of Princeton University. He also served as the interim director of the Institute of Politics at the John F. Kennedy School of Government at Harvard University from September 17, 2007, to September 1, 2008, when Bill Purcell was appointed permanent director.

Jim (James) Leach, age 79, switched his party registration from R to D to vote in the June, 2022 primary. He said the switch was prompted by a Republican Party that he described a lurching to the right and lying about the results of the 2020 election. Here, in long-time Republican James Leach’s words, are his thoughts on the present-day GOP:

“My own view is that there is no excuse whatsoever for an insurrection. And that we’re in one of the most profound challenges to American democracy ever, excepting the Civil War. Today, the Republican Party that I spent so many years with has really let the country down. And we need to have a political party that operates in a way that both parties can participate.  The Republican Party has just torn itself apart, and it’s got to pull itself together.  I’ll lean toward the Democratic party as long as excellent people are running.”

Leach went on to specifically endorse University of Iowa colleague Christina Bohannan, a law professor, running against Marianne Meeks. “This particular year could not be more appropriate for a law school professor to run. She’s intelligent and not an embarrassment to the state or anything. She’s a decent person. I just don’t see anyone standing up to Christina.” Leach also said he would support Mike Franken, a former Navy Admiral and Democrat running to unset 88-year-old Chuck Grassley. Leach cited Franken’s naval experience as a plus to Congress and took issue with Grassley’s role in ushering through conservative picks for the U.S. Supreme Court. Some have also linked Grassley to potential foreknowledge of the impending insurrection (see previous article on Weekly Wilson).

Of Admiral Franken, Leach said, “It’s really important we have some naval knowledge in the Senate which is why I was very pleased to see Admiral Franken run. Leach did not see the chances of a moderate Republican in Iowa winning as very favorable. “It would be awfully, awfully hard in the primary. A lot of Republicans would have a decent chance in the general election, but would have a really hard time, at least over the last year, in a primary.”

James Leach said, “We have an obligation to pull together and vote for anyone who has a moral capacity to lead in a credible way.”