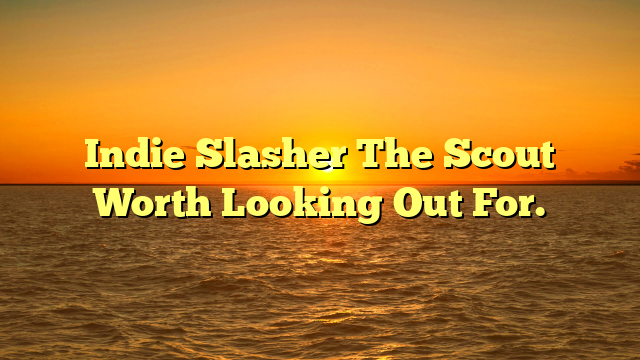 Ah yes, the never-ending sub-genre of horror that is the beloved slasher film.

It’s been done to death (ahem), but I’ve found that there is still mileage to be found here… if you find the right sources.

Bring together the tried-n-true inside jokes of low budget filmmaking, a game cast and some snappy one-liners (as well as some legit suspense) and you might just be able to pull this off.

Such is the case with the recent film from writer/director Michael Kallio (see my positive review of his previous feature, Mutant Swingers from Mars), The Scout.  The film held its World Premiere at the recent 21st Annual Screamfest in Hollywood.

A micro-budget horror/sci-fi film called “Terrestrial Evil” is underway.  It’s in pre-production and auditions are being held.  Director/writer Jeffrey Meadows (Kenneth Guertin) and his partner/producer Denise (Marla Lizbeth Perez) sit through auditions to find the best cast (and folks who can not only act, but serve on the crew as well – this is indie-filmmaking, yo!), before finding the right group.  Once the cast is chosen, additional prep continues – namely finding a cheap or free location where they can shoot their flick.  When a promising location lead mysteriously falls through, one of the cast-mates throws another option on the table… but this location is in the middle of nowhere, and it’s kinda spooky.  Oh, and did I mention that there have been some satanic ritual killings in the vicinity as of late?

Look, there is simply nothing better than “bad auditions” caught on film.  And it takes someone who has been there (on either side of the camera) to really make them shine and ring true.  Scenes out of Waiting for Guffman, The Fabulous Baker Boys or the little known 80s gem, Sing – all showcased scenes of people trying to reach for their dreams, and thus treating audiences to some terrible “auditions”.

We get a lot of that in The Scout.  One might say that there was too much.  I mean, it was all enjoyable, but there comes a point where you say, “Let’s get on with it”, story-wise.

And once the film moved on, these small trifles were left behind.

I love a good ensemble cast, and I truly enjoyed this one.  There’s not a ton of character development here, but honestly, would you expect deep family histories and intense anecdotes about growing up?  No, of course not.  And Kallio knows that’s not the type of story he’s telling here.

It’s the disparate cast of characters: the perky, obnoxious lead (Anastasia Elfman as “Patty Jane”), the hot, doofus-y leading man, Sam (Derrick Zonca), the bitchy, “Not sure why I’m here” supporting female, Jessica (Jessica Moore), the shy, “don’t put me on camera” photographer Damon (Eric Marq), as well as the aforementioned director/writer and producer.  So naturally, there will be clashing personalities, and The Scout is full of that wonderful “on set” drama.

While everyone has their moments, the standout performances come from Moore (as social media influencer Jessica) and Perez as producer Denise.  Despite the film’s overall goofiness, I found these two performances to be the most organic.  Of course, Moore is a social media influencer, so she slipped into those shoes with ease.  She’s got an “it” quality which makes the character (despite her cattiness and vapidness) a joy to watch.

As for Perez, she perfectly captures the put-upon producer, notably when her director is flirting with the potential female cast-members.  Keep an eye out for those rolled-eyes, side glances to the BTS camera.  Delicious.  Oh, poor Denise!

What makes a film like this work, is when the actors understand the tone of the story being told.  And everyone present here, gets it.  No one’s taking it too seriously, and so no one stands out as “coloring out of the lines”.  So while the cast gets credit for that, it’s also necessary to call out Kallio for getting everyone on the same page.

But there is the potential issue, which I’ve kvetched about before… this is a “found footage” film, but don’t let that turn you off.  The entire pre-production process and the location scouting is being documented by BTS filmmaker Damon.  So this all feels pretty justified.  And whether or not it was intended, I found it hysterical, that when characters asked Damon (after things start to get violent), why he’s still filming, there’s absolutely no response, no justification – which works perfectly in this film’s particular tone.  So well done on that account.  You brought it up for discussion, only to throw it down to the ground.  Brilliant.

Then again, when the film’s final revelations come to light, perhaps there was a reason that the cameras kept rolling.  Hmmm….

And another of my constant gripes, had to be set aside here as well, because it created no issue.  When characters in films chat ad nauseum about horror films or films in general – it always comes across as a a show-off by the writers/filmmakers about their vast cinematic knowledge.  But in this instance, with these particular characters, I bought it.  And the discussion of devil/Satanic movies, whilst the cast/crew is in the van – actually serves the plot and characters.  So it’s all justified, and fun.

And speaking of the van, there is a particularly suspenseful sequence on the way to the secondary location – where Denise and Jeffrey leave the van to investigate something out on that lonely, country road.  So it’s not all just laughs, horror cliché call-outs and infighting.

Look, it all comes down to this.  Was I entertained?  Absolutely.  So despite treading some familiar “stalk-n-slash” territory, The Scout is a fun, well-acted and enjoyable entry into the slasher sweepstakes.

No wider release information is yet available, but keep your eyes peeled for any updates.