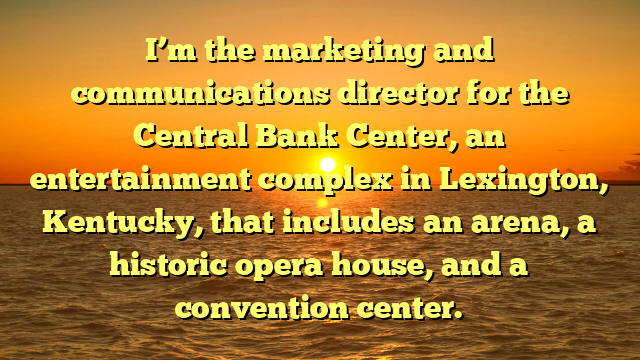 I was a journalism major in college. I thought I wanted to be a writer, but after a series of jobs doing promotions and publicity—first for the 1984 Summer Olympics in Los Angeles, then for the film industry—I realized I just do not love to write. I love to promote things that I believe in.

In California I met my first husband, who worked in the Thoroughbred horse industry. For a while we lived in Santa Barbara, and I was the film commissioner for Santa Barbara County. When our two kids were little, we moved to Lexington so my husband wouldn’t have to travel so much. The move brought me closer to my family, and I loved the idea of this new adventure: life on a beautiful horse farm, on an idyllic country road. In my mind, it was heaven. In reality, I almost went bonkers.

We were in marriage counseling, and I’ll never forget the counselor looking at me, the very first session, and saying, “You need to get a job.” He saw that I was losing my sense of power. I was dependent on my husband for everything, after having taken care of myself for so long. At the time, I did not want to hear it. But I got a part-time job in a consignment store. While I was there, I found out about a job working for the Thoroughbred Owners and Breeders Association, producing their annual fundraising dinner. I was hired to do that one event and then became their marketing manager.

After my husband and I divorced, I had a strong urge to get out of the Thoroughbred world, to let him have that corner of Lexington. Plus, I really missed working in the arts. I saw an ad in the paper for a position at the Central Bank Center (then called the Lexington Center): programming director at the opera house. I interviewed for it, but the CEO felt I was better suited for another position he had in mind, which was developing and heading up an in-house marking department. My experience in big markets, along with my connections in the community, were the right assets at the right time.

We do over 300 events a year. I love brainstorming for promotion ideas, like when P!nk came to the arena and we tried to figure out how many ways we could turn the city pink. Not everything pans out, but one spark of a good idea usually leads to an even better one.

I have a side gig, another situation where I get to be the conduit for something I believe in: I’m a stylist for a clothing line called cabi. I love the clothing itself, but I also love the selling model, which is about getting a group of women together to shop, where everyone is rooting for everyone else. It goes back to my family; I have five sisters, and our mother was a style maven. She would take us to Loehmann’s, and in that communal dressing room, all the women would end up flocking to her for advice. She had amazing taste, but she was also a great cheerleader. Joining cabi felt a little like getting my mother’s spirit back in my life, shortly after she’d passed away. The culture of the company also inspires me; it’s run by women and focused on empowering women in every aspect of their lives.