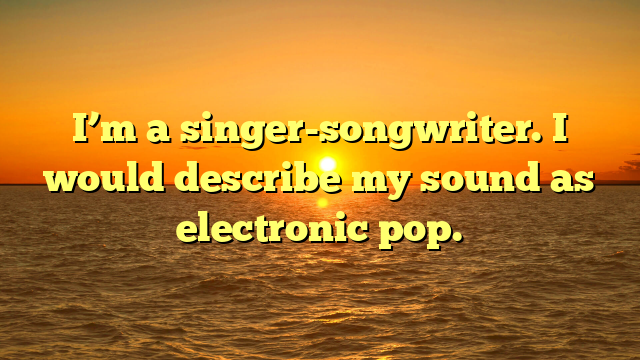 I’ve always loved performing; I attended theater school on the weekends starting at age 13. But I don’t think I considered it something I could do as a career. When I was 16, I learned about a full-time music academy about an hour away from my home. I auditioned, thinking it would be good practice, not really expecting to be accepted. But I was offered a place at the school on the spot. My parents were really supportive and looked at it as a once-in-a-lifetime opportunity for me. I spent that time in school developing my sound and exploring what kinds of messages I wanted to put out into the world.

With my songwriting, I have always aimed to dig deeper than the conventional heartbreak songs. I’m most inspired by music that has an honest and intimate feel, giving listeners the opportunity to process their own emotions. This is something I aim to replicate with my own music. I like to write about women’s issues, bringing my perspective to situations and obstacles that so many of us face but don’t necessarily talk about. I find there’s a lot of comfort in knowing other women have dealt with the same experiences.

I’ve just released my debut single, “Call It Love.” The lyrics are about this notion girls are taught from an early age, that boys pick on us because they like us. It’s a mentality that follows women to adulthood, as we convince ourselves that certain men are just playing hard to get. I know this has led me into some dangerous situations, where I’ve allowed myself to become vulnerable with people who did not have good intentions.

This song took me over a year to write. I set out to bring awareness to this destructive mentality, but at the same time I wanted the lyrics to remain somewhat ambiguous, allowing each listener to take the song and apply it to their own lives. It’s a scary thing for me, putting it out there to the whole world. My work has allowed me to become more open and honest when discussing everything I have encountered as a woman.

My main goal right now is to write great music that people love, while continuing to bring awareness and reflection to many issues that aren’t discussed as much as they should be.

The most difficult thing about being an artist is the discipline you have to have. I often find myself working from the moment I wake up until 11 p.m., and I still feel there aren’t enough hours in the day to achieve everything I want to.