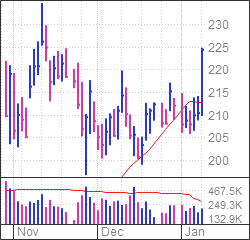 Medpace Holdings (MEDP) is Tuesday’s IBD Stock Of The Day as MEDP stock bounces off its 50-day line amid bullish fourth-quarter expectations.

Analysts expect Medpace to report double-digit sales and earnings growth for the December quarter. The company is a clinical contract resource organization, or CRO. It helps drugmakers run the clinical studies needed to gain approval for new medicines.

Strength in the quarter would suggest Medpace is still outpacing funding challenges in the biopharma segment. When it reported third-quarter earnings, the company issued a bullish outlook for 2023, calling for 18% sales growth at the midpoint of its guidance.

In the months since, however, MEDP stock trended down and then sideways. It is forming a pattern with a potential 235.82 buy point. Right now, shares are rebounding off their 50-day moving average, above a Dec. 16 high, MarketSmith.com shows. In recent days and weeks, many buy signals have quickly reversed, however, so investors should tread cautiously.

For the fourth quarter, analysts polled by FactSet expect Medpace to report adjusted earnings of $1.79 per share and $386 million in sales. Earnings would pop almost 36% and sales would jump 25%.

So far, the slowdown in funding for biotech hasn’t had an impact on the pace of clinical studies, Evercore ISI analyst Elizabeth Anderson said in a note last year to clients.

“There have not been broad delays to (studies)/work, which was a characteristic of the last downturn,” Anderson said. “Management is somewhat concerned regarding new product starts, though again management has not seen any broad-based issues on this front.”

Medpace guided to $1.68 billion to $1.74 billion in 2023 sales. Anderson says that guidance appears conservative. But MEDP stock soared almost 38% the day after the company issued its outlook. Now, analysts expect $1.69 billion in sales this year.

“Should funding levels revert to the historical trend line (example: 2021 data), management would be more optimistic on their outlook,” she said.

Medpace shares jumped 6.6% to 224.80 in afternoon trades on the stock market today.

MEDP stock has a strong Relative Strength Rating of 95 out of a best-possible 99. This puts shares in the top 5% of all stocks when it comes to 12-month performance, according to IBD Digital.

Shares also have a nearly perfect Composite Rating of 96, putting MEDP stock in the leading 4% of all stocks in terms of fundamental and technical measures.

Genetics, Alzheimer’s And AI — Why 2023 Could Be The Year For Biotech Stocks

Get Stock Ideas From IBD Experts Each Morning Before The Open

The post IBD Stock Of The Day Flashes Buy — But Tread Cautiously appeared first on WorldNewsEra.