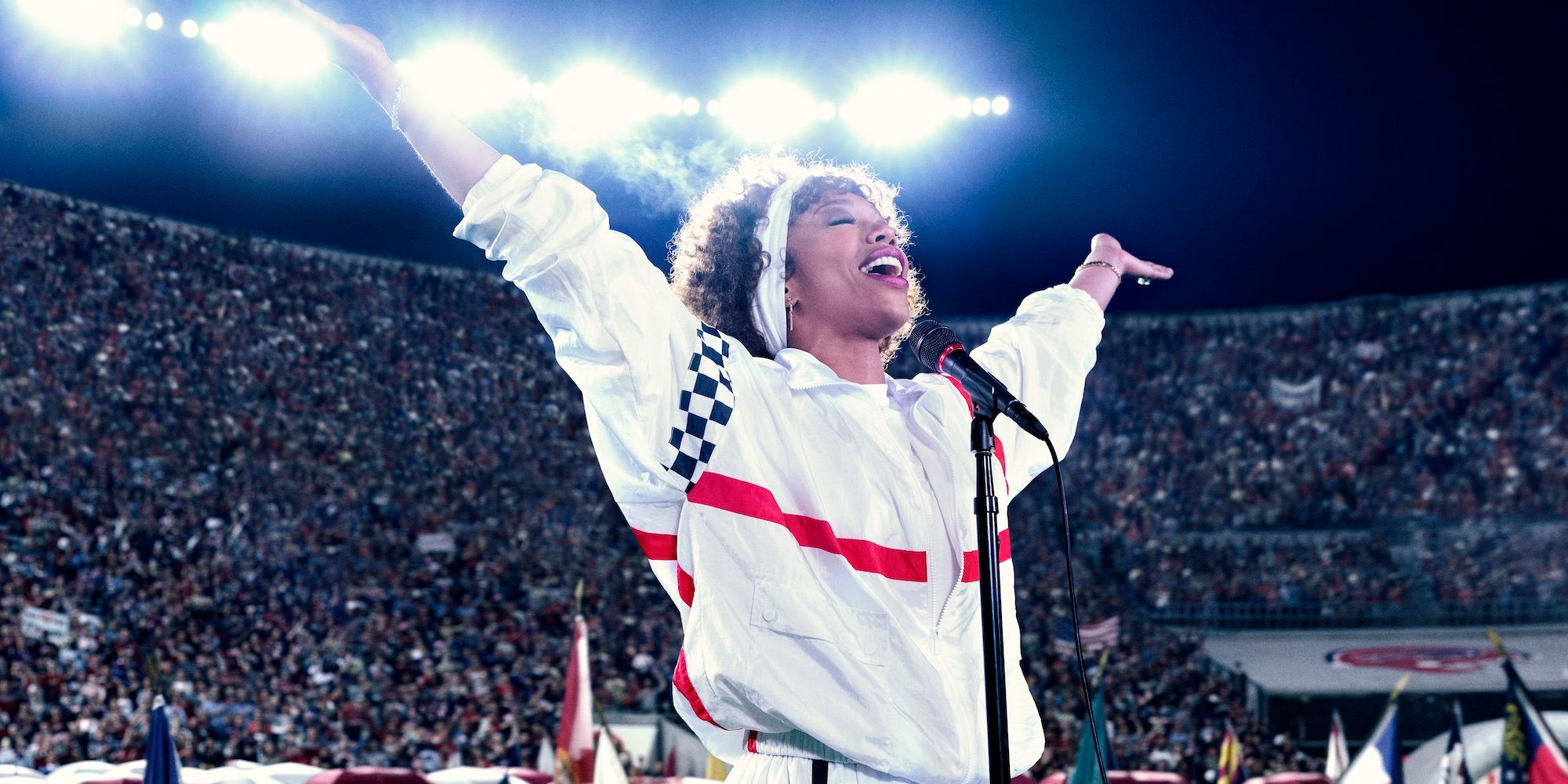 For a biopic, I Wanna Dance with Somebody follows the norms of the genre but allows Naomi Ackie to deliver a sensational performance in the process.

Nearly 11 years ago, global sensation and renowned superstar Whitney E. Houston shocked the world with her untimely death. Because of her remarkable artistry, which later deemed her “The Voice,” she’s had great influence on pop culture as it exists today. Given her celebrity, Houston’s life has been documented onscreen in a variety of projects. In 2018, Whitney, which premiered at the 2018 Cannes Film Festival, became the second of three documentaries on the star’s life. More recently, Lifetime premiered the biographical film, Whitney, which starred Yaya DaCosta as the titular character with Angela Bassett in the director’s chair. Now, Whitney Houston: I Wanna Dance with Somebody sees a chronological telling of the late singer’s rise to fame in addition to the problems she faced in the process.

Whitney Houston was a vocal powerhouse and star from the moment she entered show business. Directed by Kasi Lemmons from a script written by Academy Award nominee Anthony McCarten, who also penned the script for Bohemian Rhapsody, the film portrays the complexities of the multifaceted woman behind major hits like her rendition of Dolly Parton’s “I Will Always Love You” and “I Have Nothing.” From New Jersey choir girl to one of the best-selling and most awarded recording artists of all time, viewers can expect an inspirational and emotional journey of Whitney Houston’s trailblazing career, with great performance depictions and insight into the woman behind the voice. For a biopic, I Wanna Dance with Somebody follows the norms of the genre but allows Naomi Ackie, who stars as the late singer, to deliver a sensational performance in the process.

With so many documentaries and films before this one, I Wanna Dance with Somebody doesn’t have much else to reveal about the beloved and iconic singer that was Whitney Houston. For all intents and purposes, Lemmons’ feature acts less like a history lesson (despite its storytelling model) and more like a celebration of all that Houston was, for better or worse. Sure, McCarten’s script crams in every possible major hit and occurrence into the film, but that enables Lemmons to let loose in reminding audiences why Houston was such a star.

That said, there are some missing pieces from which the film could have benefited. Early childhood years, for example, could have impacted the story further, giving audiences insight into how Houston developed such a powerhouse voice. In lieu of featuring these elements, I Wanna Dance with Somebody relies on viewers’ existing knowledge of the superstar, only briefly giving insights into what led to her troubles. On the other hand, the reliance on her voice and less on her problems and tragedies is what makes Lemmons’ latest a fun and easy watch. It gives the audience a sense of joy, which ultimately comes off as a celebration of life instead of rehashing the intricacies of Houston’s personal struggles.

While the creative team behind I Wanna Dance with Somebody puts in very little effort to avoid being just another biopic, it is the cast that goes above and beyond to bring a picture to the big screen that is worth the watch. Naomi Ackie truly commits to delivering a performance that brings in equal amounts of laughs and tears. For viewers unfamiliar with her work, now is the time to get behind her remarkable talent. Black Lightning’s Nafessa Williams also delivers a wondrous performance as Houston’s long-time best friend Robyn Crawford. If there’s anything to take away from this story through their performances alone, it’s that everlasting friendship among women is a blessing.

In the end, Lemmons and McCarten’s chronological overview of Houston’s stardom is a fine biopic that doesn’t offer new insights — at least not to longtime fans of the singer. What it lacks in showcasing the woman behind the voice it makes up for in the depictions of some of Houston’s most recognized performances. I Wanna Dance with Somebody celebrates the star that captured the hearts of many fans around the world. And through a great performance by Ackie, this film has the ability to do the same, even if it sticks to genre rules.

I Wanna Dance with Somebody will release in theaters nationwide on December 23. The film is 146 minutes long and rated PG-13 for strong drug content, some strong language, suggestive references, and smoking.

The post I Wanna Dance With Somebody Review: Exceptional Cast Soars Above Standard Biopic appeared first on WorldNewsEra.