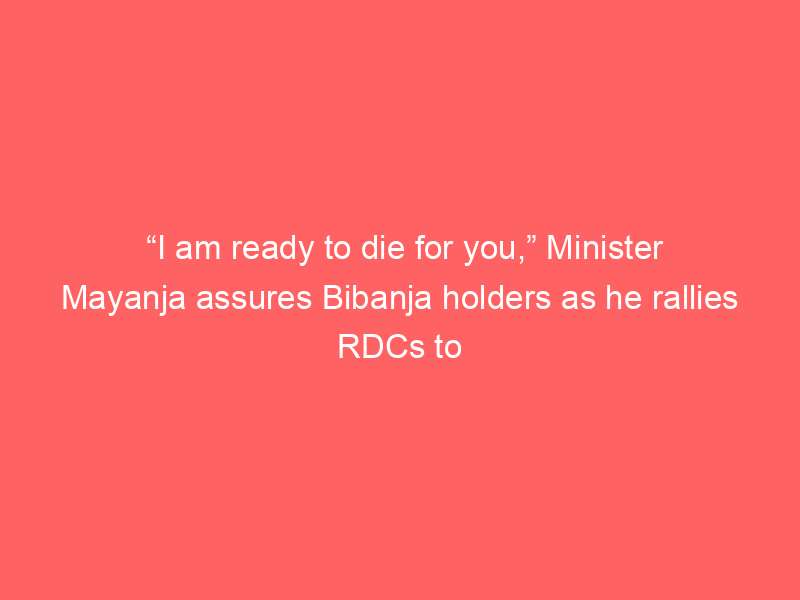 The State Minister for Lands, Hon. Sam Mayanja, has assured Bibanja holders that he is ready to fight for their rights until his last breath.

The Minister made the revelation during the ongoing Resident District Commissioners (RDCs) and Resident City Commissioners (RCCs) orientation retreat at the National Leadership Institute (NALI), Kyankwanzi, this afternoon.

Hon. Mayanja told RDCs, RCCs and their Deputies that even before being appointed Minister by President Yoweri Museveni, he was already an advocate of the rights of Bibanja holders and by posting him into the lands ministry, the Fountain of Honour just helped him to intensify his fight against illegal land owners and grabbers.

“No more Bibanja evictions. I have put in place structures to deal with land grabbers. Land belongs to all people of Uganda,” he assured.

Taking the Commissioners through the history of land in Uganda, Hon. Mayanja said Bibanja holders were turned into serfs by the 1900 Buganda Agreement. He said that the four Commissioners of the Uganda Protectorate who met in 1923 agreed that the introduction of Mailo in Buganda was a mistake and should not be introduced in other areas of Uganda.

The Minister added that even though Mailo was restored in the 1995 Constitution as a tenure, there is no legal provision in existence intended to breath life into Mailo land titles which had been canceled/extinguished by the 1967 Constitution (Article 108) and the Land Reform Decree, 1975.

“The Law instead provided for conversion of customary tenure and leasehold granted on former public land into freehold. Article 237 (4) further provided that on the coming into force of this Constitution (a) all Ugandan citizens owning land under customary tenure may acquire certificates of any change of the legislative status for Bibanja’s ebyaffe.”

Hon. Mayanja lauded President Museveni for successfully defeating the anti-bibanja attempts by some interest groups who were trying to use their unofficial veto power to either block the change in Parliament or get what they want from Government.

He explained that over the years, the President has been coming up with directives to protect Bibanja holders.

“Security of occupancy of Bibanja holders being a Constitutional right, the Constitution under Article 99 (1), (2), and (3) gives the President powers to uphold and protect the constitution,” Hon. Mayanja stated

“On 22nd February, 2013, while at Rwakitura, the President directed, among others, that all evictions involving peasants were halted. Anybody found engaging in evictions was to be prosecuted according to the Law and those who had been illegally evicted be assisted by Government to go back to their Bibanja.”

He reminded the RDCs that on February 28, 2022, President Museveni issued Directives banning all evictions all over Uganda without the consent and observation of the District Security Committee (DSC) chaired by the RDC /RCC.

” If evictions go ahead without the above being done, the members of the DSC will be held responsible and action shall be taken against them,” the Minister reminded them.

During the same session, the Minister appreciated six RDCs for playing a distinguished role in the fight against land grabbers in their respective districts.

First in the line was Ms. Justine Mbabazi, the Wakiso RDC also Dean of RDCs and RCCs.

“RDCs must be diligent. You must not feel inferior since you’re representatives of the President. It’s you who elevate that Office or make it inferior. In the case of land, I have seen RDCs using their office to help people against land grabbers and others using it to victimise them.”

The post “I am ready to die for you,” Minister Mayanja assures Bibanja holders as he rallies RDCs to fight land grabbers appeared first on Watchdog Uganda.