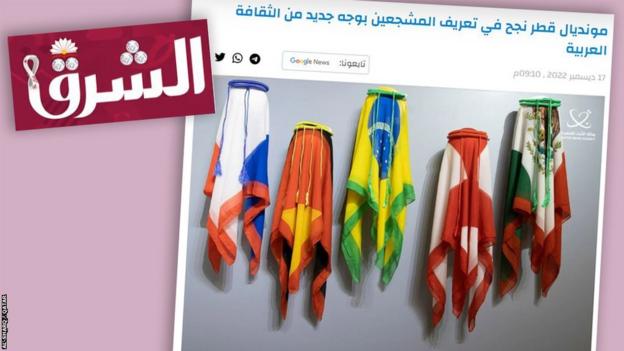 If there was a sense of destiny to the Argentina and Lionel Messi storyline, the 2022 World Cup was also a triumph for the underdog.

Numerous upsets, the early slaying of footballing giants and one team’s dizzying run to the semi-finals hinted at the fragility of the traditional footballing order.

This was, of course, an image that Qatar wanted to portray, not just in sporting terms, but also in the realm of international politics.

And with the show now over, there is a feeling in some parts of the world that the Gulf state’s hosting of a thrilling tournament represents a major shift in the global system.

From the beginning, Qatar has bullishly defended itself against criticism of its right to stage such an event. Now it feels vindicated.

The state news agency QNA said: “The dream has become reality and has not been derailed from its path by the distortion campaigns and malicious allegations.” The pro-government Al-Sharq newspaper said the event had shown “fans to a new face of Arab culture”.

This was a sentiment echoed at the top. Qatari Emir Tamim bin Hamad Al Thani tweeted: “We have kept our promise to organise an exceptional tournament from Arab lands that gave the opportunity to the world’s people to get to know the richness of our culture and the authenticity of our values.”

The sense of Arab pride was bolstered by the Morocco team’s heroics. Morocco’s state-run Al Aoula TV attributed this to a broader trend, saying the Qatar-hosted tournament “had a special flavour, seasoned with the culture of a people who did not abandon their roots, and who remained attached to their traditions, despite a thousand critics”.

It added that the tournament “will be remembered by all of the world’s peoples, and future generations will be taught how the Arabs have succeeded in astounding the world with messages of brotherhood, tolerance and solidarity”.

In Iran, the strictly conservative Tasnim news agency said: “After all the twists and turns, the 2022 Qatar World Cup ended with an Argentine victory. However, Western media criticism of the Qataris goes on.”

It also reflected on the controversy surrounding Messi being asked to wear an Arab Bisht (cloak) to receive the trophy, noting that when Pele was asked to don a sombrero after the 1970 final in Mexico it was “considered a kind of cultural coexistence”.

“How, then, can clothing Messi in a bisht convey a different message now?” it asked.

In South America, to which the trophy will be returning for the first time in 20 years, there was also reflection on how the tournament revealed the co-dependence of politics and sport.

In Mexican daily El Universal, columnist Mario Maldonado claimed the tournament had shown how unfairly the vast financial resources behind football are shared.

“It is worth stating things clearly: football is the most watched sport in the world, with a market of hundreds of millions of fans, and so is one of the most profitable businesses… why does this business distribute the greater part of its resources between a minuscule group of owners, directors, players, advertisers and owners of broadcasting rights? Could not the business of football be more democratic?” Maldonado wrote.

In Brazil’s Folha de Sao, columnist Mathias Alencastro said the tournament was “contested and controversial”, but also showed that Western countries were “increasingly incapable of shaping the opinion of the international community about a country, a regime, or a culture”.

“Despite revolting scenes such as the persecution of [LGBTQ+] rainbow flags in the stadiums, the truth is that the cup improved the profile of, and general knowledge about, the Qatari brand,” he added.

Alencastro also said that Qatar’s neighbours had benefitted from the event, noting that Saudi Arabia is reported to be preparing bids to host the World Cup and the Olympics.

Argentina’s Clarin also considered the significance of the tournament for the Gulf region, saying: “Qatar’s project of investing in football is the same as that of Saudi Arabia and Crown Prince Mohamed bin Salman, which has purchased the British club Newcastle.

“The Saudi prince wants to organise the 2030 World Cup and looks to conquer Fifa, despite his reputation.”

Colombia’s El Espectador noted that the day of the final, 18 December, was International Migrants’ Day. It quoted a UN statement saying that “migrants have shown themselves to be a source of prosperity, innovation and sustainable development for the countries of origin, transit and destination” – singling out the France team in the Qatar World Cup final as an example.

An opinion piece on Senegal’s Sene News website hailed the “sociability and hospitality of Qataris” and said the World Cup took place “in a warm, festival and festive atmosphere”.

“Yes, Qatar has sent a powerful message to emerging countries: a nation can keep its cultural and religious values while remaining modern,” it said.

“No state should accept the dictatorship of the powerful and see itself impose ideologies, ways of seeing, doing and being.”

The editor of Liberia’s privately owned Front Page Africa website said the World Cup demonstrated persistent inequalities among Liberian youth, after public criticism that President George Weah went to Qatar to watch his son playing for the US national team.

“But as we all cheer for Tim Weah, let us also think about how, over the years, our young people in Liberia, especially those who absolutely have no other nationality or citizenship like Tim Weah, are being persistently deprived of needed opportunities to optimise their potential,” it said.

South Africa’s Mail and Guardian online newspaper published a blog that declared Palestine the winner of the World Cup as various teams – including Morocco – regularly declared support for the occupied state, adding: “It is lovely to see especially since Fifa and Uefa are notorious for being hard-nosed when it comes to political matters. But Palestine is a human-rights matter.”

In Ukraine, the tournament took second place to the Russian invasion, which is now in its 10th month.

“I have felt that I do not enjoy football passions as I used to because it is a game,” MP Viktoria Siumar wrote on Facebook.

“This is the first time in my life I have not seen a single Fifa World Cup match,” former Luhansk regional governor and Georgiy Tuka posted on Facebook.

In Russia, which was banned from taking part, there was also a sense that the tournament was passing fans by. According to an opinion poll, only 9% of Russians “regularly watched” the games, and more than half said they were not following the World Cup.

‘The monopoly no longer remains’

China’s official Xinhua news agency published an article headlined “Qatar’s World Cup – Winter Fairytale” which emphasised the “rise of Asia and Africa”, focusing on the success of Morocco’s Atlas Lions who “let out a world-shaking roar, turning a new page for African soccer”.

The Times of India said: “The Fifa World Cup final will be remembered for a long time, thanks to the heart-stopping thrills and the drama it offered up to the very end. Qatar can take pride at having delivered a great tournament after all the initial carping about how it won the bid.”

The Indian Express, meanwhile, saw symbolism in how Doha will once again be physically transformed in the aftermath of the tournament, with the removal of some stadiums.

“Some would be dismantled and reassembled in Africa, some would wait for their next moment of glory, when it becomes abuzz again,” it said.

“Some would be converted into offices, some would be leased to local clubs. Some would stay as emblems of the days Qatar hosted the World Cup. Perhaps more than the country, it’s the stadiums that would shed tears on the glory that has passed, of the magic that was.”

An editorial in Pakistan’s Daily Times said: “Doha has changed the entire narrative altogether, wherein the monopoly no longer remains with the liberal West. Like it or not, the Gulf countries have decided to bring their two cents to the table.”