Hit the Road (Jadde Khaki, 2021) is an Iranian film written and directed by Panah Panahi,  the son of masterful Iranian film auteur Jafar Panahi.  This is a “road movie” that has a special flavor 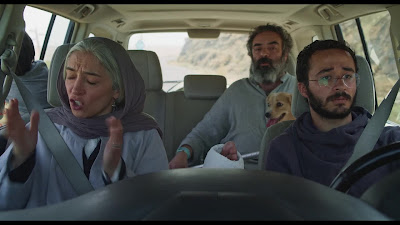 to it, thanks, in part, to its Iranian context.

Although I customarily don’t spend much time discussing film production details, because such details can get in the way of  directly appreciating the film’s aesthetics and storyline, I sometimes make an exception for Iranian films.  That is because the Iranian government’s incessant incessant suppression of free expression in all media, including the film medium, makes it extremely difficult for creative filmmakers to express their ideas cinematically, and the reader may benefit from learning a few things about this background.  That is the reason why, for example, many good Iranian films are “road movies”.  It is sometimes only within the close confines of a road vehicle that the filmmaker has the privacy and freedom from spying eyes to be able to show genuine human interactions.

And, of course, there is the matter of the Panahi family background.  Panah Panahi was born in 1984 and went to film school.  But most of what Panah learned ed about filmmaking came from watching both his famous father, Jafar Panahi, and his father’s equally famous mentor, the noted Cannes Film Festival Palme-d’Or-winner, Abbas Kiarostami, who often discussed their film projects with each other, with the young Panah sitting and watching in the background [1,2].  However, things became much more complicated when Jafar Panahi’s progressive attitudes and  film expression came under the critical scrutiny of the Iranian government, and in 2010 he was charged with producing propaganda against the government.  He was then sentenced to

“six years in prison and a 20-year ban on directing any movies, writing screenplays, giving interviews with Iranian or foreign media, or leaving the country except for medical treatment or making the Hajj pilgrimage” [3]. 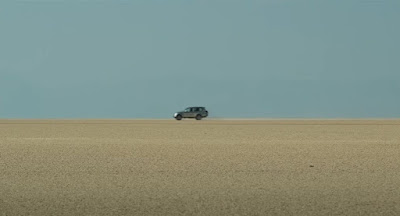 Since then Jafar Panahi’s activities have been severely restricted,, and he has more or less been under house arrest.  Nevertheless, he has somehow managed to continue to make some films, and his son Panah has continued trying to help in the background.  Eventually, Panah’s own contributions became more significant, and he was credited as the co-editor on his father’s recent film 3 Faces (2018).

Note that both Jafar Panahi and Abbas Kiarostami have made some road movies.  Does that mean that Panah Panahi’s Hit the Road is a film like those of his mentors?  Yes and no.  Hit the Road has features of other Iranian road movies, but it has some of its own novel aspects, too.
The film begins by showing a SUV parked along the side of a highway, and the viewer is not given any real background information as to what’s going on.  Instead the film employs the cinematic technique of “slow disclosure” to draw the viewer in to learning more about the situation.  The SUV has four people in it, evidently a family headed somewhere.  In the front is a twenty-something young man behind the wheel and a middle-aged woman in the front passengers’ seat.  In the backseat area is a middle-aged man with his leg in a cast that stretches out into the space between the two front seats.  Sitting next to this man in the backseat is a rambunctious and naughty six-or-seven-year-old boy, This family, the viewer will eventually surmise, is fleeing from some unspecified, dangerous situation in Tehran, probably brought about by the oppressive government of the Iranian Islamic Republic.  Indeed the young driver of the SUV has probably been conscripted into military service, which can in Iran be a very dangerous situation to be in..

So in this film the focus is primarily on the four contrasting members of the family in the SUV heading west out of Tehran:

As the family heads west in the SUV towards the Turkish border and hopeful refuge for Farid, we gradually learn amidst all the wisecracks along the way, that they have made great sacrifices to save the young man.  In order to get the money to pay off illegal, underground human-smugglers at the border, the family has sold their family house and car – the SUV they are driving is a borrowed vehicle.  All these details have to be kept away from the younger boy (the “2nd Monkey”), because he is such a young blabbermouth that he can’t be trusted with this information – he might give the game away if he converses with someone they meet along the way.

So as the journey

proceeds, the viewer is privy to two levels of concurrent inside-the-vehicle conversations — (1) the lightweight smart-alecky patter on the surface and (2) the guarded worry-laden remarks revealing concerns about constant surveillance threats and upcoming dangers.  These ingredients make the film special and have led it to receive accolades from the critical community [1,2,4,5,6,7,8,9,10,11].  As A.O. Scott of The New York Times remarked in this regard [4]:

“What makes Hit the Road so memorable and devastating is the way it explores normal life under duress. An unseen, oppressive force — presumably some aspect of the government that has harassed Panahi’s father for more than a decade and tried to prevent him from making films — imposes its will on them. That invisible cruelty makes the tenderness and good humor of this movie all the more precious, and almost unbearable.”

“Here, the details don’t matter as much as their heartbreaking consequences: the irreversibly burdened families unfairly torn away from their loved ones, and a society that carries those scars.” 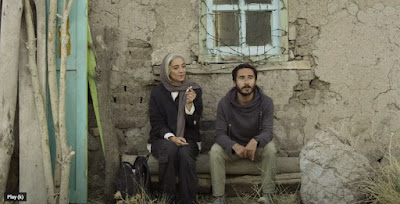 Panahi achieves all this emotive filmmaking with the help of his excellent production staff.  This  included the always emotive music by Peyman Yazdanian (which also featured some diegetic pop music from pre-revolutionary times).  The cinematography by Amin Jafari and film editing by Amir Etminan and Ashkan Mehri, much of which was focused on activities inside the SUV, was excellently executed, included many long takes that were adroitly performed and that added to the intimacy of the goings on.  One highly imaginative sequence featured their visual rumination on 2001: A Space Odyssey (1968) (you will have to see the film to see how that fits into the storyline).  As critic Richard Brody of The New Yorker commented more generally [6]:

“[Panahi’s] visual compositions are essential elements of his world view, whether in a poised side-by-side image of Farid and his mother evoking ineffable love at a rest stop with a discussion of 2001: A Space Odyssey or an unbearable moment of separation that’s ingeniously filmed from hundreds of feet away, with heartbreaking reserve that nonetheless captures both its frantic energy and its poignant intimacy. Panahi’s visual correspondence of elisions and separations replicates the silences and mysteries that mark the characters’ own adventure.”

And so the family of four proceed along their stressful, doubt-laden path.  Although the outer structure of the story suggests one of event-filled adventure and danger, this is really a story about human relationships.  In fact it’s a story about love – family love.  You can watch Hit the Road to see what happens at the end of their journey and how things come out.