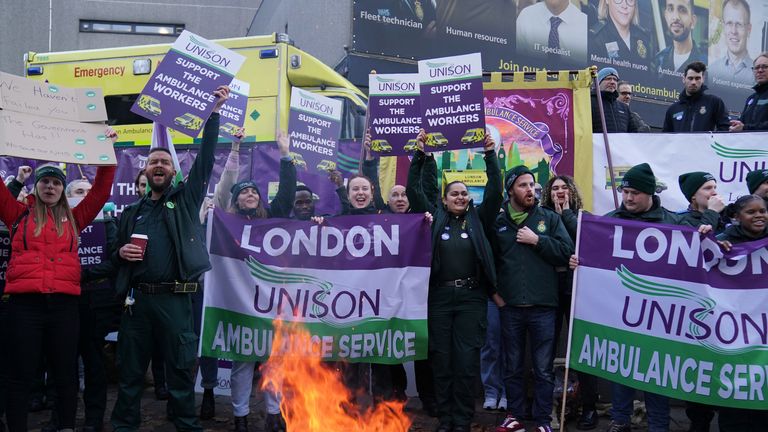 Two days of strikes by nurses and paramedics will have a knock-on effect on appointments with a return to “very high numbers” of emergency calls in the coming days, NHS Providers has warned.

The number of people calling 999 appeared to drop in some parts of England yesterday and the membership organisation for NHS hospital, mental health, community and ambulance services said there had been “varying levels of disruption” across the country.

It said some demand had shifted to other services or not materialised as expected.

But the organisation said demand for care across the whole healthcare system remained high and trust leaders were reporting ongoing delays to ambulance services and overcrowding at some accident and emergency departments.

Nurses, ambulance staff, railway and postal workers have now returned to work, however, there are more strikes taking place today – with highway workers and driving test examiners among those downing-tools.

The military steps in

NHS England said at least 11,509 staff were absent from work across England during strikes by the Royal College of Nursing (RCN) on Tuesday and 13,797 appointments and procedures had to be rescheduled.

Members of the military stepped in to take the place of ambulance workers yesterday, with trusts telling patients to only call 999 in the case of a life-threatening injury.

he next ambulance strike is due to take place on 28 December.

Read more:
Strikes every day before Christmas – which sectors are affected and why

Meanwhile, reports said the government could fast-track an NHS pay rise next year.

The Daily Telegraph reported that Health Secretary Steve Barclay is poised to offer an expedited pay deal after unions and ministers remained mired in a stalemate over pay conditions.

The paper said a source close to Mr Barclay, who has been criticised by unions for suggesting striking health workers had “made a conscious choice to inflict harm on patients”, revealed he is keen to “speed up the process” of giving NHS staff a pay rise early next year.

Unions have said they expect NHS workers to be offered a 2% increase next year based on a letter Mr Barclay sent last month to the NHS Pay Review Body.

Wales strike action ‘upsetting to all’

Doctors in Wales are considering taking strike action for the first time, the British Medical Association Cymru has said.

Almost two-thirds of hospital doctors surveyed by the union said they would be willing to take some form of industrial action over pay and conditions.

Iona Collins, the BMA’s Welsh Council chairwoman, called the survey “upsetting to all” and said it is “gut-wrenching for doctors to consider walking away from work”.

She added: “Without action now, patients will continue to suffer as a direct consequence of an under-funded NHS with insufficient direct clinical care.”

In October, the BMA announced that a ballot for industrial action by junior doctors in England will open on 9 January.

Just under 1,000 doctors in Wales responded to the survey seeking views on a 4.5% pay award from the Welsh government – with 78% of those who answered saying they want a pay rise matching or exceeding inflation.

Dr Collins said: “Doctors have been quietly quitting the NHS for years, by reducing their contracted hours or leaving altogether. The financial incentive to remain in the NHS has eroded over the last decade.”