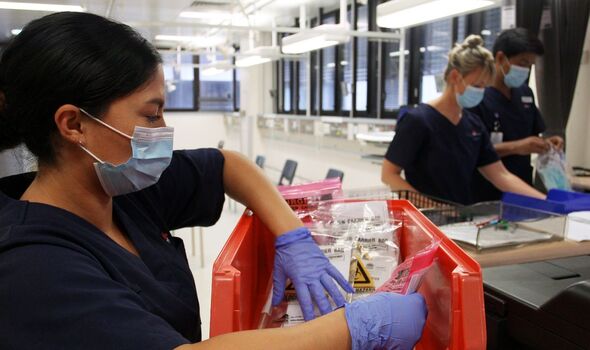 Top medics have urged people to get vaccinated against flu (Image: GETTY)

A short, sharp wave of cases in Australia has sparked fears a similar outbreak in the UK – due to low immunity – will pile more pressure on an already creaking NHS. A record 35 million people are currently eligible to have a flu jab.

Professor Robert Booy, an infectious diseases expert at Sydney University, said many viruses had made a comeback during Australia’s winter, from June to August.

He warned: “You can be quite sure the UK is going to get at least a moderate, and potentially a severe respiratory viral season.

“It will be dominated by flu and Covid but also include other viruses. You need to be preparing now.”

There were almost no UK flu cases in the last two years, as Covid measures including lockdowns subdued other viruses. However, that means immunity is likely to be low, leaving people more vulnerable.

More than 223,000 flu cases were reported in Australia this year. They included 295 deaths and 1,763 hospital admissions.

Prof Booy said: “Flu came early this year, which was unusual, and it peaked quickly, then went away fast.

“Whereas previously it had been spread over three months, this time it was more like six to eight weeks. That was because we think a lot of viruses came back this year.

“All these viruses were spreading like crazy and competing with each other, so the combination of all of them led to a bad respiratory season.”

The elderly also face increased risk through not being around the virus for a couple of years.

Prof Booy said: “We don’t have optimal rates of immunisation in young children or the elderly. We could do better, in the UK and here.”

Flu jabs are being offered to a record number of people in the UK this year, including over-50s, healthcare staff, carers and mothers-to-be.

There are fears even a moderate wave of respiratory infections could hit the struggling NHS.

The service did not have its usual summer respite and there has been record pressure on ambulances and A&E departments in recent months.

He said vulnerable people should take “simple, common sense” measures, such as wearing a mask, keeping their distance, cutting the number of social guests and moving events outside.

Gary McLean, a molecular immunology professor at London Metropolitan University, said there was “no better time” to have the annual flu jab and the Covid booster.

“With the predicted rise in Covid cases also occurring, we are likely in for a bad winter in terms of respiratory virus infections.”

Professor of medicine Paul Hunter, of East Anglia University, warned there may be “a big peak in infections and many people getting quite sick”.

The health protection expert added: “Many people may not have had flu for five years. Taking up the flu jab if offered is the best thing you can do to protect yourself this winter from this infection.”

‘I need to protect my family this winter’

Lisa Taylor was the first patient to receive a flu jab from a high street pharmacy this autumn.

The 51-year-old from Chiswick, west London, received her vaccination at a Superdrug store.

She said: “I decided to organise my flu vaccination earlier than I usually would due to the uncertainties around higher levels of flu this season. One of my children is immunocompromised and my parents are older and more vulnerable, so I need to do everything I can to stay healthy and protect my family.”

Superdrug is offering both NHS and private flu jabs and has seen an unprecedented 788 per cent increase in bookings compared with 2021.

Niamh McMillan, the company’s pharmacy superintendent, said: “We have trained all of our pharmacists and nurses to offer the service in as many locations as possible to help make sure the most vulnerable are protected.

“We are also in the process of setting up a number of Covid-19 vaccination clinics to support the public in getting their booster over the coming months. We’re seeing unprecedented demand from the public looking to protect themselves and their families.”

The NHS is now starting to roll out flu vaccinations for eligible people.

Although the public health focus since early 2020 has been very much on Covid-19, flu remains a major threat to vulnerable individuals and the health service in the UK.

We have been fortunate that in the last few years, flu rates have been very low here.

However, there are signs from Australia that we may see much higher rates of influenza this winter. Australia has seen its highest flu rates since the start of the Covid crisis and this may be a predictor of what the UK may face during our own winter.

Because flu rates have been low in recent years, this means that people will have less immunity from a previous infection.

The end of Covid-19 control measures – such as face masks and social distancing – combined with the return of normal social activities also increase the likelihood of a large flu outbreak this winter.

This makes flu vaccination essential – particularly for the elderly, the clinically vulnerable, and people who work in health and social care.

You can get your flu vaccine at a range of sites such as your GP surgery or a local pharmacy.

Getting the flu vaccine reduces your risk of being infected and of suffering a more severe illness
that may result in hospital admission or death.

By getting vaccinated, you are also helping to reduce the pressures on the NHS at a time when it is facing unprecedented demands for care.

So don’t delay. Get your flu vaccine if you are eligible to protect yourself and to protect the NHS.