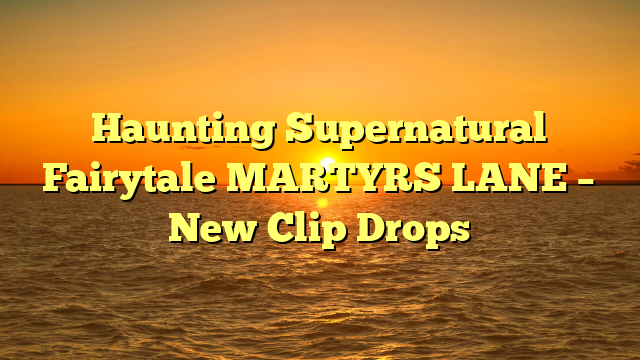 In this unsettling ghost story, Leah, 10, lives in a large, old house with her family but can’t quite work out why her mother seems so distant. At night she is visited by a mysterious guest, who might be able to give her some answers. With a new challenge every night, Leah is rewarded with bits of knowledge that, when pieced together, threaten to shine a dangerous light on both the truth in her nightmares and of the world she lives in.

Written and directed by Ruth Platt, and expanded from her 2019 short film by the same name, MARTYRS LANE is a deeply personal film that explores love and grief through a dark and captivating ghost story.

Lead impressively by young actors Kiera Thompson and Sienna Sayer, the main cast is rounded out by Denise Gough (who will be seen in the upcoming Game of Thrones prequel series), Steven Cree (OUTLAW/KING, BRAVE), Hannah Rae (Broadchurch, FIGHTING WITH MY FAMILY), and Anastasia Hille (THE ABANDONED).

MARTYRS LANE is produced by Christine Alderson and Katie Hodgkin for Ipso Facto Productions and developed and financed by the BFI, Lipsync, and Sharp House.

Martyrs Lane will stream exclusively to Shudder on September 9 in the US, Canada, UK, Ireland, Australia, and New Zealand, as well as via the Shudder offering within the AMC+ bundle where available.