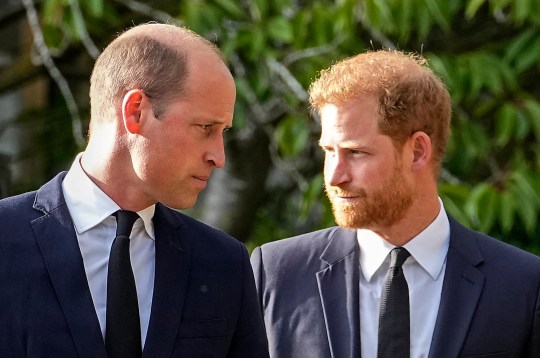 The Duke of Sussex has likened his brother to the character Stewie Griffin in his new memoir.

Prince Harry and Prince William’s sibling rivalry has dominated headlines in the lead-up the official release of Spare.

The duke claims he was physically attacked by his brother and knocked to the floor during a furious confrontation.

In the memoir – released at midnight on Kindle, Audible and in selected bookshops – large portions of the book surround the warring brothers.

Harry discusses shaving his head as a dare as a schoolboy, and rushing to tell his older brother about his regrettable decision.

Harry writes: ‘Of course, there was nothing Willy could do [about the shaved head].

‘I was just hoping he’d tell me it would be OK, don’t freak out, keep calm, Harold.

‘What a question. He sounded like Stewie from Family Guy. Wasn’t it obvious?’

Harry also references the cartoon character once more in his retelling of his school years, this time in relation to smoking in school bathrooms.

He writes: ‘Then we’d all head to one of our rooms and giggle ourselves sick over an episode or two of a new show. Family Guy.

‘I felt an inexplicable bond with Stewie, prophet without honour.’

Prince Harry also described his brother’s loss of hair as ‘alarming baldness’ in one chapter of the book.

The section surrounds a tense argument between the brooding brothers and their father.

Harry writes: ‘I looked at Willy, really looked at him, maybe for the first time since we were boys. I took it all in: his familiar scowl, which had always been his default in dealings with me; his alarming baldness, more advanced than my own; his famous resemblance to Mummy, which was fading with time.

‘My beloved brother, my arch nemesis, how had that happened?’