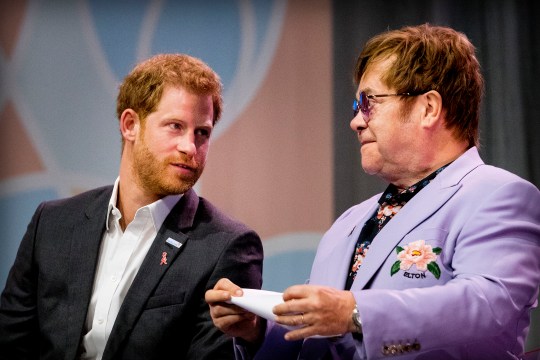 Prince Harry said he felt ‘numb’ before his mother’s funeral but was almost brought to tears listening to Sir Elton John perform during the service.

Sir Elton was a close friend of Princess Diana, and famously performed an adapted version of Candle In The Wind at Westminster Abbey.

Writing in his memoir Spare, Harry recounted his feelings as he walked behind his mother’s coffin with his brother Prince William.

‘The funeral began with a series of readings and eulogies, and culminated with Elton John,’ he wrote.

‘He rose slowly, stiffly, as if he was one of the great kings buried for centuries beneath the abbey, suddenly roused back to life. He walked to the front, seated himself at a grand piano.

‘Is there anyone who doesn’t know that he sang Candle in the Wind, a version he’d reworked for Mummy?

‘I can’t be sure the notes in my head are from that moment or from clips I’ve seen since. Possibly they’re vestiges of recurring nightmares.

‘But I do have one pure, indisputable memory of the song climaxing and my eyes starting to sting and tears nearly falling. Nearly.’

Sir Elton has remained a close friend to William and Harry throughout the years and attended both their weddings along with his husband, David Furnish.

During an anniversary concert in memory of Diana 10 years after her death, he refused to play the song as he ‘didn’t want to be morbid.’

Get all the latest updates on Metro.co.uk‘s dedicated Prince Harry page.

Instead, the musician performed his ballad ‘Your Song,’ which Harry described as being done with ‘a twinkle and a smile, aglow with good memories’.

‘Willy and I tried for that same energy, but then photos of Mummy began flashing on the screen. Each one more radiant. We went from being crumpled to being swept away,’ he added.

Elsewhere in the book, Harry recalls reaching out once again to Sir Elton in the summer of 2019 when he and Meghan were ‘losing it’, and says the singer offered to let them stay at his home in France, where he and his family were staying.

Harry recounted the ‘best part of the visit was watching Elton and David and their two boys fall in love with Archie’.

He added: ‘Often I’d catch Elton studying Archie’s face and I knew what he was thinking: Mummy. I knew because it happened so often to me as well.

‘Time and again I’d see an expression cross Archie’s face and it would bring me up short.

‘I nearly said so to Elton, how much I wished my mother could hold her grandson, how often it happened that, while hugging Archie, I felt her – or wanted to. Every hug tinged with nostalgia; every tuck-in touched with grief.’